You are here: Home / Search for ""Daniel Gutiérrez""

There’s no doubt that the latest Star Wars film, Rogue One: A Star Wars Story, provides an uncanny reflection of our own times. The movie was released at the tail-end of a year that saw the death of countless poets, the demise of popular democracy across multiple countries, and the increasingly visible reconfiguration of a nationalist tendency throughout the global north. Looking towards next year, with the coming elections in both Germany and France, it should be clear that 2016 was not just one unjust, anomalous year — rather, its the first bad year in a new cycle defined by injustice.

Likewise, Rogue One allows a preview into a world defined by a long cycle of injustice, where popular forces have been beat back for decades under the iron grip of authoritarianism. This long wave of loss is feelable throughout the film — the dirty surroundings that define the home-bases and the avenues of rebellious factions, the constant necessity to hide oneself and not cause attention, the constant worry of each and every character of having been fed yet another half-truth wrapped in deception.   [Read more…]

By Daniel Gutiérrez and Victor Herzfeld

The event attracted a wide array of attendees from multiple unions, neighborhoods, and campuses to address burning questions that face labor today. Speakers included various organizers, like folks from SEIU, United Taxi Workers of San Diego, Unión del Barrio, ARE, AFT, UAW, IWW, the Seattle Education Association, and a slue of others that deserve mention. However, what made the event more remarkable than the list of invited speakers was the shear fact that it was so well attended. More than 120 people gathered on an early Saturday morning to address the future of the labor movement in San Diego, nationally, and internationally.   [Read more…] 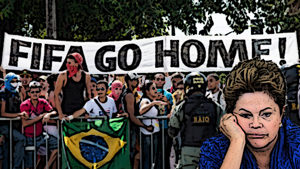 [Editor’s Note: The World Cup begins today in Brazil. Thousands upon thousands of Brazilians have been protesting the billions of dollars spent to pay for hosting it while basic needs of the impoverished are unmet.]

The past week in Brazil has fully revealed the face of the country’s Worker’s Party (PT). If there’s any wonder as to which side of the fence the PT is on, it surely isn’t on the side of the workers. And Dilma said it herself, “Today there is a systematic campaign against the World Cup — or rather, it is not against the World Cup but rather a systematic campaign against us.” These words are reminiscent of [former British Prime Minister] Maggie Thatcher’s proud words against striking miners: “We had to fight the enemy without in the Falklands. We always have to be aware of the enemy within, which is much more difficult to fight and more dangerous to liberty.”   [Read more…] 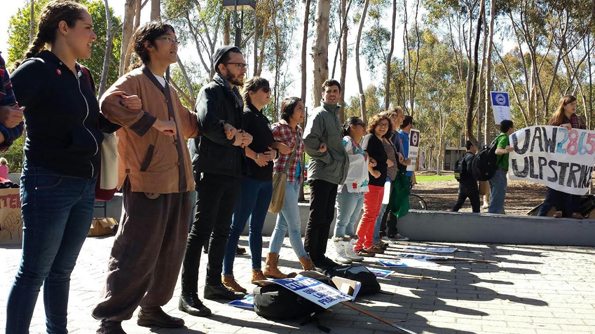 La Jolla, California — On Tuesday, April 15th, UAW Local 2865, representing graduate student-workers across the University of California system, reached a tentative agreement with UC management regarding the procurement of all-gendered bathrooms and lactation stations. UC management succumbed to the necessities demanded by UAW Local 2865, acknowledging that both all-gendered bathrooms and lactation stations are a labor right to graduate student-workers. The historic achievement was reached after the union went on strike for two days early this month, in which nearly two dozen students were arrested and many others intimidated.   [Read more…]

Graduate students and undergraduate supporters began to assemble in front of the university’s emblematic library at 8:30 am to begin their activities. Students were able to successfully close Gilman Avenue for nearly twenty-five minutes in an attempt to cause delays for the city and school bus services.

Strikers created human barricades along a busy pedestrian avenue that cuts through the heart of the campus. Later in the afternoon, strikers attempted to storm the Office of Graduate Studies, but the office locked its doors to them and even one of their own employees.   [Read more…] 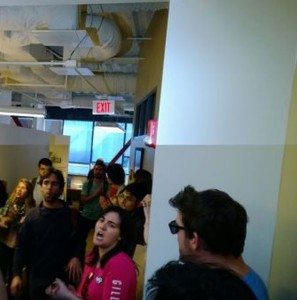 La Jolla, California — Students at the University of California, San Diego stormed the Office of Graduate Studies Tuesday, April 1, to protest a controversial employment policy implemented across the University of California. The “18 Quarter Limit” restricts doctoral students by only allotting them 18 quarters to be teaching assistants, readers, or graduate student researchers. Such positions, if secured, reduce a graduate student’s tuition from roughly $5,200 a quarter to a mere $196. The action came on the eve of the two-day strike that will be held April 2nd and 3rd at UCSD.

The 18 Quarter Limit greatly affects graduate students who begin their studies in MA programs and then transfer to doctoral programs. This is because their access to funding begins to expire after their first quarter in the university as Master’s students.   [Read more…]

The outrageous conduct by the leadership for the Balboa Park Celebration, Inc. continues.

After blowing through nearly $3 million during the past three years with nothing to show for it, BPCI co-chair Nikki Clay and transition director Gerry Braun have told the City Council’s Environment Committee that they’ll be unavailable for a hearing today.

Committee chair David Alvarez is looking for answers, requesting a report be provided regarding the soon-to-be-defunct group’s activities and along with an explanation for the $13,000-a-month salary being paid to Braun while he winds things down.

UPDATE: Braun did appear, after all. According to one observer:

He was grilled by Marti Emerald for a delightfully painful 20-25 minutes. He stayed on message and script as best he could, but he had no answers to the good questions. 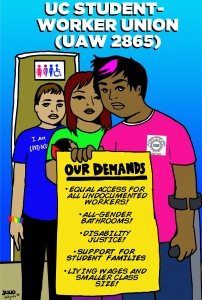 Graduate students affiliated with United Auto Workers Local 2865 at UC San Diego have announced a two-day strike for Wednesday, April 3, and Thursday, April 4. The dates selected for the strike fall on the first week of the school’s Spring Quarter.

The UAW Local 2865, which represents over 12,000 graduate student workers across the campuses of the University of California, voted and passed the strike. UAW Local 2865 has been in contract negotiations with the University of California for nearly a year. Union representatives have been meeting with labor-relations delegates for months trying to secure better wages for graduate student workers and improve work-place conditions.

The University has been hostile towards any advancement in workers’ rights, despite ever-growing expenditures on management. Despite the fact that many of the school’s graduate student-workers receive poverty wages, the UC administration continues to treat its own like royalty.   [Read more…] 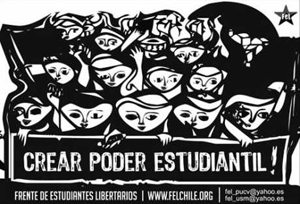 Chilean delegates from Librería Proyección, Periódico Solidaridad and La Alzada Acción Feminista Libertaria (La Alzada Anarcha-Feminist Action) met with students and community members at UCSD, Monday, March 3rd. The delegates met as part of a tour sponsored by the Black Rose Anarchist Federation and the IWW at UCSD to spread word of the student movement in Chile.

The delegates rooted the current education crisis in Chile in the massive reforms made under the US-backed Pinochet dictatorship. Through state repression and intervention, the dictatorship was able to demobilize and dismember the popular movement in Chile. It was during the 1980s that a series of reforms took place that changed the education system to this day. Under these programs, education became two-tiered, in a system where the poor went to private universities and the rich went to public ones.   [Read more…]