This week’s twists and turns involving Attorney Cory Briggs, the City, the Chargers and the barons of the hospitality industry are simply stunning. Get your popcorn now, folks, cause this mess is likely to go on for a while.

Forget for a moment about whether a new stadium or convention center or combination facility is desirable; yesterday’s shenanigans peeled back the facade on local politics to reveal a mess of squabbling interests and a mayor paralyzed by the prospect of actually doing something, anything.

At the center of all this are ballot measures potentially paving the way for a joint use facility in the East Village, aka the convadium. I’ll do my best to sort this out.   [Read more…]

I was thrilled to read in the San Diego Free Press the recent critique of the Citizens’ Plan that former City Councilmember Donna Frye and I have been promoting and that will appear on the November 2016 ballot. The critique’s author (a lobbyist and developer’s lawyer) raises an excellent question about the initiative’s effects on East Village and Barrio Logan, but he provides nothing except wrong answers that rest on a series of false claims. Responding to the critique thus gives me a good opportunity to explain some of the benefits of the initiative that have not yet received a lot of media attention.

Before debunking the specific claims in the critique, it is important to understand what the Citizens’ Plan does and does not do downtown. For starters, the initiative allows convention-center facilities, a sports facility (not necessarily football), or combined facilities within the boundaries of Imperial Avenue to the south, 17th Street to the east, K Street to the north, and Park Boulevard to the west – and nowhere else. Significantly, it includes no mandate that such development be given priority over any other development projects, offers zero guaranty that the development will come to fruition, allows the development to be done “in addition to” all other development already allowed, and requires that the development be done (if it’s done at all) “in accordance with all other applicable legal requirements.” In short, the initiative does nothing more than enhance downtown’s revitalization prospects.   [Read more…]

I said in a deposition some time ago that I thought Cory Briggs was to the environmental justice movement in California what Dr. King was to the civil rights movement. Recent events cause me to think some more about that.   [Read more…] 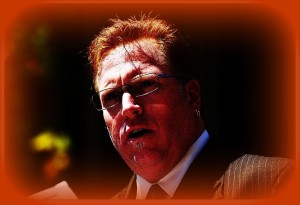 A host of experts assert that Briggs has made questionable and possibly fraudulent deals while claiming the woman he’s shacked up is his wife. The EyeNewSores team will examine these deals in future weeks, publishing exclusive headlines revealing a side to this so-called public interest lawyer that some may find shocking.

EyeNewSores has discovered that Briggs, a key figure in the resignation of former Mayor Bob Filner, may or may not have battered his alleged ‘wife,’ according to sources close to a high profile attorney and elected official famous for his ethics and fair play.   [Read more…]

“The case put forward to this point just doesn’t seem right, kind of like a badly fitted toupee on an otherwise well-dressed man.”

There’s no doubt about the fact that attorney Cory Briggs has made his fair share of enemies in San Diego. His actions in court have made Briggs the bane of corporate interests, providing what I believe to be a necessary counter-balance in a region where it seems as though the “people’s advocates” express concern about issues only after exposés appear in the press.

So it’s ironic that San Diego’s City attorney is now responding to an investigative series focused on Briggs. And the suggestion is being made that the source for these stories may have been somebody connected with the city’s legal offices, which have made no secret of their disdain for the attorney in the past.

Over the past few days inewsource  has published three stories questioning Briggs’ ethics. Liens filed by the attorney on properties may have been fraudulent efforts to shield assets. Briggs wife’s employment with an environmental planning company used by local governments may represent a conflict of interest, given the nature of many of the legal actions he has pursued against various agencies.   [Read more…]

Something really good for San Diegans happened last Thursday: The rabid, asinine pursuit of a convention center expansion on the waterfront hit a concrete wall at 100 miles per hour.  But that wasn’t the best part about Kevin Faulconer’s last-minute effort to put a “citizens’ initiative” on the November 2018 ballot after an “unprecedented coalition” failed in its “Herculean effort” to gather enough signatures to clear the mark.

For San Diegans, the best thing that could have happened was for The Establishment – the usual special-interest suspects on the right and the left who run City Hall – to break into a thousand tiny pieces.  That is indeed what happened.  Hallelujah!

I’m sure that my Twitter feed and e-mail inbox will start blowing up as soon as people read that last paragraph, if not before they finish this one.  I’m going to be accused of being anti-worker because, as those who had front-row seats to The Establishment’s demise last week know, some of the biggest names in San Diego’s labor movement were part of the “unprecedented coalition” that crashed and burned.  Many of them I consider good friends; outside City Hall, if I needed the shirts off their backs, they’d give them to me without hesitation (and vice-versa).   [Read more…]

As we survey the admittedly depressing landscape of politics in this country, this weekend provides the opportunity to observe some of the accomplishments of the past few decades by activists and allies in the LBGTQ movement.

San Diego Pride festivities have grown from a small grassroots march for equal rights in the 1970s into the largest civic event in the region, with activities spanning a full week. The organizers of San Diego Pride have donated over 2.5 million dollars to LGBTQ-serving nonprofits and runs multiple year-round education, advocacy, and community service programs.

This year’s theme is Persist With Pride, a slogan that should serve to remind all of us of the long and winding road we’re traveling.   [Read more…]

San Diego’s reputation for stealthy relationships between land developers and elected officials got a boost on Tuesday as the source for a leaked memo revealed himself.

The press release –sent by a public relations firm associated with the developers of Soccer City– made it seem like this disclosure was no big deal.

Surprise, surprise, surprise! Those friendly folks collecting signatures for the billion dollar SoccerCity development to replace Qualcomm Stadium are being–how shall we put it?–less than honest.

Today’s Union-Tribune includes a story involving an informal survey of 25 signature gathering locations around San Diego. Petition bearers are reportedly being paid $5 per signature and are making promises with little connection to what is actually contained in the document they are pushing.

The hope is that the San Diego City Council, with visions of $2.8 billion in economic benefits dancing in their heads, will vote to enact the ‘citizen’s ordinance’ without the need for an actual ballot measure.   [Read more…]

Four years after the Bob Filner scandal, little has changed with the leadership culture in the centers of power on the left in San Diego–namely labor and the Democratic party.

The enablers and apologists for workplace sexual improprieties, gender discrimination, and retaliation continue to use the political clout and cash flow of their organizations as a shield, preventing them from answering for their behavior or learning from their mistakes.

Engaged women are leading the resistance to what portends to be an era of oppression and repression. They can’t fight the good fight locally or nationally if women within this movement are subjugated by abusive men in powerful positions. They cannot be expected to roll up their sleeves to make changes only to realize the institutional power they need amounts to more of the same.   [Read more…]

“Doing nothing is not an option for people of good conscience.”

On a cold Wednesday evening in Kearny Mesa prominent San Diegans Donna Frye and Irene McCormack joined community members to show their solidarity with Sandy Naranjo, Isabel Vasquez and Anabel Arauz and call for the resignation of the President of UFCW Local 135 and San Diego and Imperial Labor Council, Mickey Kasparian.

Naranjo, Vasquez, and Arauz filed separate lawsuits against Kasparian accusing him of gender discrimination, sexual harassment, retaliation, and other misdeeds. Also named in all three complaints are the union itself and in Arauz’s filing, Richard Barerra, executive assistant of the local.

McCormack was the chief communications aide to disgraced, former mayor Bob Filner and the first of many women to accuse him of sexual harassment. Former City Councilwoman Donna Frye, alongside lawyers Cory Briggs and Marco Gonzalez, was the first person to come out publicly to condemn Filner and call for his resignation.   [Read more…]