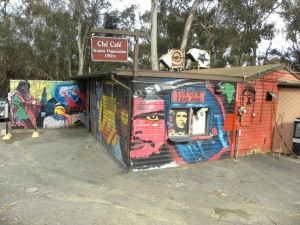 The struggle continues to keep the historic CHE Café facility open on the University of California San Diego (UCSD) campus. This battle over a rare public, all-ages arts, food, and music venue should concern us all as it represents the canary in the coal mine for additional onslaughts of this nature to follow.

Undergraduate and graduate student government councils, respectively the Associated Students (AS) and the Graduate Student Association (GSA) are set to soon issue reports and recommendations to the University as to the CHE Café, its facility and the other cooperatives at UCSD concerning the lease issues, upgrades and dispute resolution. Recently, the councils moved in favor of adopting a joint resolution rather than two independent ones. In the coming weeks then the councils will be synthesizing their input and accepting more from students on these issues as well as from the CHE and other cooperatives.   [Read more…]

On Wednesday, November 19, UCSD administrators decided to seek a writ of possession to enforce an earlier unlawful detainer judgment and evict the Ché Café Cooperative and any students from the café space it has continuously occupied for over 34 years. Despite a resolution by the UCSD Associated Students Council (AS) asking the Chancellor to not proceed with posting a 5-day notice to vacate, and 14,000-signature petitions and open letters demanding that UCSD stop the eviction actions against the Ché Café, delivered to the Chancellor earlier this month, action by the administration to evict the Ché Café continues rather than negotiations for a new lease agreement with the Co-op.   [Read more…]

A ruling by Superior Court Judge Katherine Bacal yesterday may well mean the end of the road for the C.H.E. Cafe, a student run cooperative at UCSD.

The co-op will have five calendar days to vacate once a written order is signed by the judge and the university files a writ of possession, meaning the group could be evicted by the middle of next week.

Supporters of the C.H.E.were vague about their future plans when speaking with the news media following the court decision, saying they were considering further legal actions and promising to continue protest activity and lobbying.   [Read more…] 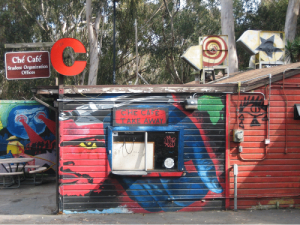 UCSD’s Che Café has been saved. For now, anyway.

The renowned cultural icon, which operates as an all-ages music venue, performance space and cafe, won a temporary restraining order allowing the collective that runs the space to keep possession until a full hearing on the merits of their case can be heard.

A hearing is scheduled for August 1, 2014. If the Che prevails in the preliminary injunction hearing, it will maintain possession of the space until a final resolution is reached in the breach of contract lawsuit filed by Che’s legal counsel, Andrea Carter, against the University Regents and by extension, the University of California San Diego (UCSD) on July 7, 2014.   [Read more…] 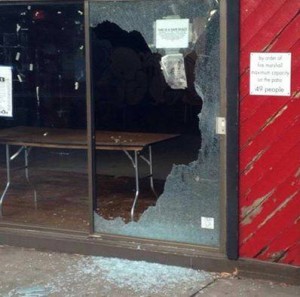 The following letter was sent to the administration and student councils of the University of California San Diego this week concerning the impending university ordered closing of the Che Cafe:

We are writing you as concerned members of the UCSD community, as citizens of California, and as UPTE (University Professional and Technical Employees, Communication Workers of America 9119) members.

We support the right of the Che Café to continue operations in its current building and oppose any plan for demolition of the building. We are motivated by values of fair play and due process as well as our sense of civic responsibility to speak clearly about the educational and cultural priorities of our public university.   [Read more…]

The San Diego Free Press has published a fine article, written by the Che Cafe Collective. Please circulate it widely. SDFP editor, Frank Gormlie, is an alum of UCSD.

Alumni of the UCSD co-ops are mounting a call for all alumni to write to the University telling them we are cancelling the “planned giving” that we previously intended to do upon our demise, until and unless they back off and treat the Che Cafe and all the co-ops with proper respect.

As a union activist (SEIU steward and IWW San Diego Organizing Caucus and formerly, in my grad school days, Press Representative of my AFT TA local in Oregon), I am interested in working with people to try to get all the unions at UCSD (and the SD-Imperial Counties Labor Council) to issue support statements and consider donating money to the collective for legal expenses and for facility maintenance.   [Read more…]

Statement and press release from the Ché Café Collective

By Davide Carpano, student at UCSD and member of the Ché Café Cooperative

The Ché Café, a 34-year-old student-run cooperative at the University of California, San Diego (UCSD), has been under attack by the administration for the past two months and was served with a 30-day notice of eviction on June 13, 2014.

The notice was given to the students and their lawyer during a meeting initiated by the University to discuss on the future of the Ché. The student members of the Ché were under the impression that this meeting was part of the informal mediation and dispute resolution process they had requested several weeks ago. The University’s attorney, Dan W. Park, when asked about the purpose of the meeting prior to the meeting stated: “I do not believe that there is a formal agenda for the meeting, but rather the University generally would like to have a full conversation about the future of the Ché Café facility.”   [Read more…]

A family friendly version of Cheers, if you will, the Big Kitchen Cafe is owned by Judy “The Beauty on Duty” Forman, and is a community center and diner that has been a staple in Golden Hill since the early ‘70s.   [Read more…]

The kind of music that you’ll hear from Penguin Cafe, one might not expect from a group whose roots were the fever dreams of musician Simon Jeffes induced by food poisoning back in the 70s. Even though some of his visions were bleak and isolating, they also included dreams of a place where people could gather for music, cheer and pleasure, the Penguin Cafe. Since Simon’s death in 1997, his son Arthur has carried on his vision and sensibility in the guise of The Penguin Cafe.   [Read more…]

Last week after I sent off my column about why I wrote Last Days in Ocean Beach, a novel about living on the border between dread and wonder in the Anthropocene, the news cycle was full of coincidental but eerie echoes.  A

Los Angeles Times story observed of the recent floods in Kauai, “A Hawaiian island got about 50 inches of rain in 24 hours. Scientists warn it’s a sign of the future,” while the Washington Post reported, “’Fallen off a cliff’: Scientists have never observed so little ice in the Bering Sea in spring.”

And then, flying underneath the radar while the Trump circus dominated the headlines as always, there was this story, also in the Post , “Earth’s atmosphere just crossed another troubling threshold”   [Read more…]

I felt so proud of my son, Carlos, the other day when I walked away from the grand opening of the Dojo Café, a little place on wheels he and his friends, Tayari, Peter, Nancy, and Christina put together for City Heights.

I was particularly wowed because it seems he just got here as I have vivid memories of him falling asleep in my arms after a little baby-dad play.

Then it seemed like it was only a matter of days that I was blown away by his wizardry on the soccer field and the moves he grooved to dancing on stage. On the other side of the coin, I remember wanting to, on family road trips while the van was still moving, climb over my seat and strangle him to release the pressure off that last nerve of mine he had stomped on. Oh, his energy! Dude had no off switch whatsoever. Loved him dearly never-the-less.   [Read more…]

It seems that this birthday has been going on forever. But this time the tables were turned, because I went out with Nancy and Stewart to celebrate MY birthday, and they found out that I was taking them out to celebrate THEIR birthday. Doesn’t matter, because we celebrated finding a great restaurant with an extensive menu and fair prices.

I remember many years ago eating at Jimmy Carter’s on Washington St. I was unaware that they had moved to the Fifth Ave. address. It was a pleasant surprise to see that this brightly decorated restaurant was still open to the public.   [Read more…]