You are here: Home / Search for "Maria Garcia"

One conversation about Neighborhood House always leads to another. When I told Kiko I was working on a research paper about Neighborhood House he told me “You have to talk to John Bareño.” “Kiko” is Frank Peralta, one of the people who spearheaded the effort to construct a war memorial in Chicano Park. I took Kiko’s advice and on a Thursday in May I drove to Spring Valley to interview Dr. Bareño in his home.

I found a man with a wealth of information about Logan Heights, baseball, discrimination and Neighborhood House. Dr. Bareño was born in Loreto, Baja California. His father had been offered $500.00 to move the family to Mexicali. They were going to work picking cotton there.   [Read more…] 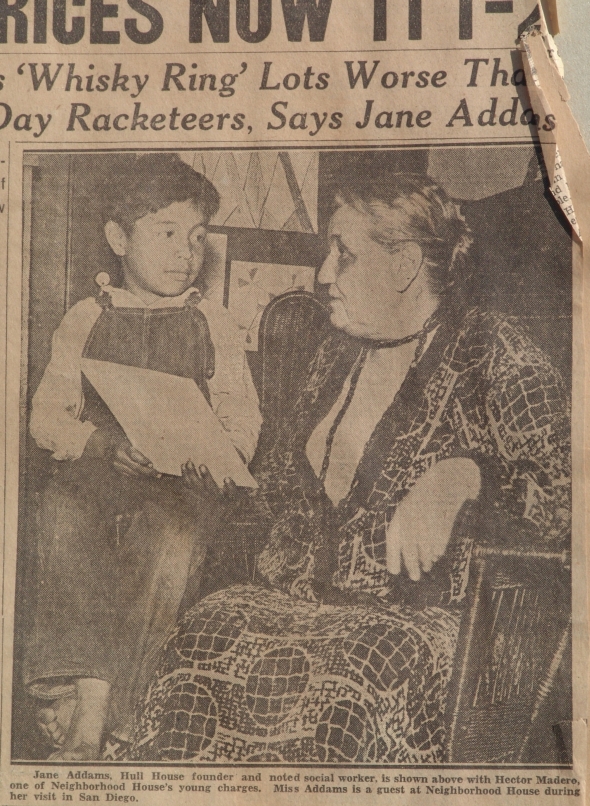 Jane Addams was born in 1860 to a prosperous Northern Illinois family. As a young child she had tuberculosis of the spine. This health problem would affect her the rest of her life. Her father was a founding member of the Republican Party. Her dream of becoming a doctor died after her first year of medical school due to health problems and a nervous breakdown. So why would this woman who wanted to be a doctor and came from a rather wealthy family have any role or influence in San Diego, California? Why would she have any roots in a settlement house in the middle of a Mexican Barrio?

In 1887 she read a magazine article about a settlement house. It became her dream to establish one. She and her close friend Ellen Gates opened Hull House in Chicago. Many women who came from wealthy families and were in the college in the 1920’s developed a similar interest and involvement. College had made them progressive in their thinking. They had a sincere interest in social issues as well as a desire to help immigrants and the less fortunate.

SDFP exclusive series The History of Neighborhood House: From 1914 to the occupation in 1972

From its inception in 1914, Neighborhood House became the heart of the Latino, Mexican-American and Mexican community. The building was known throughout the barrio as Neighborhood House, the Neighbor or Big Neighbor. It was modeled after Hull House, a settlement house established in Chicago.

The local history of Neighborhood House is in many ways the history of prominent San Diegans. People in the community who had a sincere interest in helping others would donate time and money to assure that the settlement house located at 1809 National Avenue was serving the community.

One family that gave of their time as well as their money was the George Marston family. …
[Read more…] 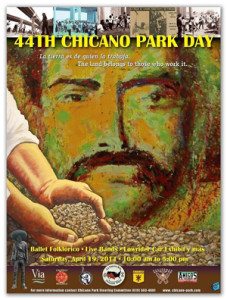 The Chicano Park Steering Committee and thousands of their friends will be celebrating the 44th anniversary of the takeover of Chicano Park this Saturday in San Diego’s Barrio Logan. The theme of the celebration is “La Tierra Es De Quien La Trabaja: The Land Belongs To Those Who Work It.”

“On April 22, 1970 a rag tag group of artists, activists, and community members joined forces and took over the land underneath the San Diego-Coronado Bridge in Barrio Logan. At the time, construction was about to begin on the building of a California Highway Patrol substation. For many years, residents of Barrio Logan had been promised a park. Seeing the pending creation of a CHP substation was the straw that broke this barrio’s back.”

Every year the community of Barrio Logan, as well as Chicanas and Chicanos from all over, and our friends and allies, all come together to celebrate the takeover of the area underneath the San Diego-Coronado Bridge.   [Read more…] 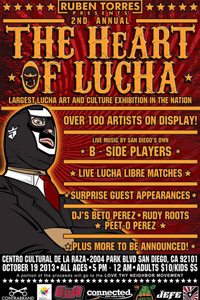 Local music and video producer, curator, lucha libre lover and all around cool vato Ruben Torres is organizing his 2nd annual HeART of LUCHA event. It is being billed as the “largest lucha art and culture exhibition in the nation.”

Last year’s inaugural exhibition took place at The Spot Barrio Logan. For the second installment Ruben has taken over the Centro Cultural de la Raza in Balboa Park where his other art series, HeART of Lotería, took place earlier this year. In addition to these two series he also organizes an annual winter toy and clothing drive for San Diego and Tijuana youth called Love Thy Neighbor (I wrote about it here).   [Read more…]

On April 22, 1970 a rag tag group of artists, activists, and community members joined forces and took over the land underneath the San Diego-Coronado Bridge in Barrio Logan. At the time, construction was about to begin on the building of a California Highway Patrol substation. For many years, residents of Barrio Logan had been promised a park. Seeing the pending creation of a CHP substation was the straw that broke this barrio’s back.

City College student Mario Solis, the Paul Revere of Chicano Park, discovered bulldozers on the site and immediately began to spread the word. He burst into the Chicano Studies class of professor Gil Robledo and let all present know what was going down under the bridge. At noon, Chicano high school students from San Diego High and other area schools walked out and marched to the construction site.

Protesters formed human chains around the bulldozers. Many demonstrators planted trees, flowers and cactus. The community wanted their park. As the crowd swelled to over 250 people, construction on the site was called off. The community took action and occupied Chicano Park for a total of twelve days. With many protesters coming from outside of San Diego after hearing the news of the occupation.   [Read more…]

If you’re of Mexican descent then at some point in your life you have probably played the ubiquitous game Loteria. For those who are not Mexican Loteria is somewhat similar to Bingo except you use numbered playing cards with iconic images on them such as La Calavera, El Borracho, El Catrín, La Luna, El Diablito, La Muerte and many others instead of numbered balls.

Ruben Torres, who I wrote about in a previous column called Love Thy Neighbor. It’s Not About Charity, It’s About Humanity, has teamed up with a collective of creative Southern Cali folks to curate a massive art exhibit, to be held at the Centro Cultural de la Raza, called The HeART of Loteria.

Ruben told me that “the opening reception is meant to celebrate a family tradition through art, performance, food and Loteria game play. It is meant to be an experience that is rich with Loteria inspired imagery and art. There will be about 200 art pieces that will be featured, created by artists from all walks of life. There will be two main experiences – inside and outside.   [Read more…] 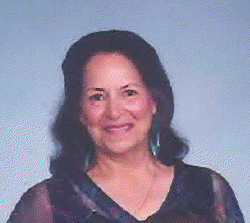 San Diego Chicano Activist to Be Laid to Rest – Tina Was on the Front Lines of Chicano Rights; She Walked Farmworkers’ Union Picket Lines in High Heels

Tina C. de Baca (mother, friend, sister, and compañera) is now at peace and she sits happily with our ancestors in heaven where the world cannot hurt her. She requested the sacraments to the end and she knew God’s love, patience, and forgiveness. Compounding other illnesses, Tina fell into unconsciousness after suffering two strokes on October 3rd and she passed away peacefully on Sunday, October 14, 2012.

The San Diego Free Press is now offering many ways for you to subscribe to our content. You can sign up to get an email with links to the new articles that have been posted in the previous 24 hours, or subscribe to individual columns for content that interests you. You will receive an email […]

Anybody Else Upset that Trump Just Threatened America With Martial Law?

In Response to Protests San Diego Police End Use of Choke-Hold, Sheriffs Continue to Use It