You are here: Home / Search for "ALEC"

The American Legislative Exchange Council (ALEC) is lead on attacking rooftop solar by working to end “net energy metering” (NEM), where homeowners and businesses are paid for (net) energy they generate above their own use. Their role in states like Arizona is outlined in The New Yorker Article “Power to the People” (Why the rise of green energy makes utility companies nervous) by Bill McKibben, founder of 350.org.

NEM is now the subject of intense proceedings at the California PUC which so far this past year hasn’t seen a fossil power plant or utility rate restructuring scheme they don’t like. This is the same PUC which is under investigation by the State Attorney General for improper communications between regulators and the regulated utilities.   [Read more…]

For a “moderate” mayor, San Diego’s Kevin Faulconer sure enjoys immersing himself in far-right political organizations.

In the coming days the first term Republican will be attending the American Legislative Exchange Council (ALEC), a conservative group that quite literally churns out bills for legislators to copy-paste and ratify as laws back at home. Now, a Republican attending a vaguely conservative club seems innocuous enough, but a quick background check demonstrates that ALEC is anything but a mainstream political organization.   [Read more…]

Sometimes we just need a little sunshine. That shouldn’t be too much to ask here in Southern California. Unfortunately, a dark cloud is headed our way in the form of a shadowy lobbying organization that buys loyalty from state legislatures with untraceable corporate dollars and threatens the very fabric of our democracy.

Exaggeration? Not even a little. Concerned yet? You should be.

The American Legislative Exchange Council, the people who brought us Citizens United, is a “bill mill” funded by corporations and billionaires. It creates “model legislation” by and for industries, which right-wing legislators then take back to their statehouses and enact into law. (Sometimes they even forget to remove the ALEC watermark from the proposed bill or change the name of the state.)   [Read more…]

By Jessica Mason / Center for Democracy and Media

In a year with unprecedented rightwing dominance in state legislative chambers, the American Legislative Exchange Council (ALEC) has continued to wreak havoc in states across the country–despite an ongoing exodus of high-profile corporate members, including BP, Google, and several high-tech firms.

Not long after the superheroes of Comic-con make their exit, the evil empire’s minions will be staging their own gathering at the Manchester Grand Hyatt in downtown San Diego.

The right-wing bill mill known as the American Legislative Council will be bringing together (July 22-24) corporate lobbyists and state legislators from around the country to plan for the coming year.

Despite having high hopes for advancing their agenda following gerrymandered GOP gains in recent elections, ALEC has run into some serious problems lately. In fact, the only entity losing support faster than Donald Trump’s presidential campaign and Rush Limbaugh radio advertisers would be ALEC.   [Read more…]

Editor’s note: The local Democratic Party kicked off a weekly blog last week with a call to action in response to the July meeting of the American Legislative Council in San Diego. We’re told there are several more articles in this same vein coming, so we’ll be sharing them with our readers as a public service over the next few weeks. We think you’ll agree that it’s important to stand together to voice opposition to these purveyors of reactionary legislation as they meet in San Diego.

On Wednesday, July 22, we have an opportunity – here in our own back yard – to educate, organize, and loudly oppose ALEC along with the corporate interests that fund it and the harmful policies it promotes. I invite you to join the Democratic Party, workers, community groups, faith leaders, and other allies in a massive protest when the organization holds its annual meeting at the Manchester Grand Hyatt downtown.   [Read more…] 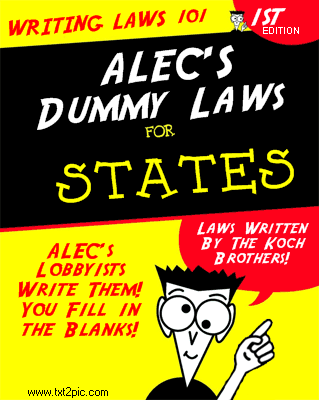 As Cruz addressed the conference, around 200 activists marched outside, waving signs reading “A Legislator for Every Corporation” and chanting “you can hear us loud and clear — we want ALEC out of here!”

Cruz (who became notorious for his effort to shutdown the government) was at ALEC to give its corporate lobbyists and state legislator members a pep talk. It was a rough week for the organization that has become known as a “corporate bill mill.”   [Read more…] 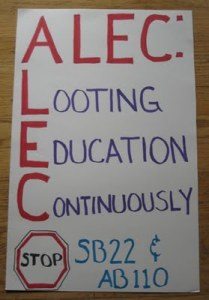 Despite widespread public opposition to the education privatization agenda, at least 139 bills or state budget provisions reflecting American Legislative Exchange Council (ALEC) education bills have been introduced in 43 states and the District of Columbia in just the first six months of 2013, according to an analysis by the Center for Media and Democracy, publishers of ALECexposed.org. Thirty-one have become law.

News Corp CEO Rupert Murdoch has called public education a “a $500 billion sector in the U.S. alone that is waiting desperately to be transformed.”

But this “transformation” of public education — from an institution that serves the public into one that serves private for-profit interests — has been in progress for decades, thanks in large part to ALEC.

ALEC boasts on the “history” section of its website that it first started promoting “such ‘radical’ ideas as a [educational] voucher system” in 1983 — the same year as the Reagan administration’s “Nation At Risk” report — taking up ideas first articulated decades earlier by ALEC supporter Milton Friedman.   [Read more…] 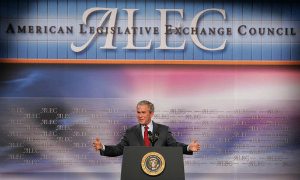 Why hire individual lobbyists and send them out in search of Congressmen when you can set up a lobbying clearinghouse and have them come to you?

ALEC, the American Legislative Exchange Council, does just that. Funded by the likes of the Koch brothers, Exxon Mobil and PhRMA, a trade association for the pharmaceutical industry, legislators are paid to come to ALEC meetings, where they are wined, dined, and handed “model” legislation to make into law in their state. Through ALEC, corporations vote on “model” legislation alongside politicians behind closed doors.

So instead of the lobbyists fanning out on Capitol Hill to meet with Congressmen individually, public officials are invited en masse to an ALEC meeting off Capitol Hill at a fancy resort, and they had better be there or be square if they want a campaign contribution or a great job when their “public service” career comes to an end.   [Read more…] 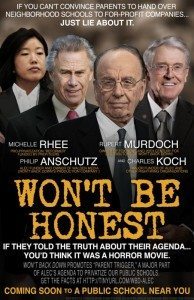 Well-funded advocates of privatizing the nation’s education system are employing a new strategy this fall to enlist support for the cause. The emotionally engaging Hollywood film “Won’t Back Down” — set for release September 28 — portrays so-called “Parent Trigger” laws as an effective mechanism for transforming underperforming public schools. But the film’s distortion of the facts prompts a closer examination of its funders and backers and a closer look at those promoting Parent Trigger as a cure for what ails the American education system.

While Parent Trigger was first promoted by a small charter school operator in California, it was taken up and launched into hyperdrive by two controversial right-wing organizations: the American Legislative Exchange Council(ALEC) and the Heartland Institute.

(Editors Note: this film is being promoted in San Diego by a group calling itself “Up for Ed”. They’re hosting a premiere this week, with a “panel” that, interestingly enough, includes not a single teacher. You can read about Up for Ed’s involvement with so-called reformer Michelle Rhee in this excellent article by San Diegan Aaron Belfer.)    [Read more…] 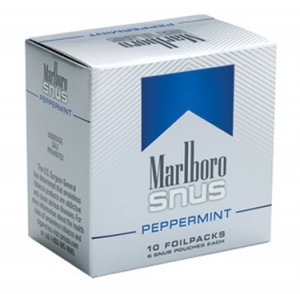 “Can Tobacco Cure Smoking?” is the title of a workshop this morning led by the tobacco industry-backed Dr. Brad Rodu, who is trained as a dentist but has the title “Chair of Tobacco Harm Reduction Research” at the University of Louisville, a program primarily funded by U.S. Smokeless Tobacco Co., an ALEC member and manufacturer of smokeless tobacco brands like Copenhagen and Skoal. He is also a Senior Fellow at the Heartland Institute, the Illinois-based think tank thatattracted attention earlier this year for making billboards that likened those who believe in man-made climate change to mass murderers and terrorists.

Rodu’s research supports the idea that smokers should replace cigarettes with smokeless chewing tobacco or “snus” moist tobacco packets — a “free market” solution to reducing smoking that would allow tobacco companies to continue profiting off of addiction.
[Read more…]

A Team That Believes in Change