Editor’s Note:  We received the news that Tanja Winter passed away on February 9, 2014.  The date for  a celebration of her life in San Diego has not been determined at this time.  This article was published in 2011 and provides a glimpse into the life of an extraordinary woman.

When Tanja Winter – the matriarch of San Diego’s progressive community – was 12 years old, she watched as German Nazis troops rolled into Prague where she lived, in what was then Czechoslovakia. It was 1939 and she was coming home from school. She vividly recalls that awful scene to this day – all the adults were standing around weeping.

Over seven decades later, I’m sitting in her living room in La Jolla Shores, getting her to tell me more of her story. I’ve known Tanja for decades but never knew the details of her growing up or her earlier life on the East Coast with her soul-mate, Bernie, who passed away a quarter of a century ago.   [Read more…] 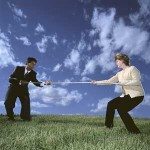 Coming soon to a theater near you will be Davis Guggenheim’s (Director of An Inconvenient Truth) latest documentary entitled Waiting for Superman. The picture, which premiered at the Sundance Film Festival earlier this year, is a moving and compelling account (I viewed a copy over the internet) of a handful of kids and their parents who simply want to go to a decent school.   [Read more…]