In early October, torrential rain flooded almost the entire state of South Carolina. At least 17 people died. The cost of the flooding could top $1 billion, Senator Lindsey Graham said. Interstate 95 was closed for 70 miles. At least 11 dams failed. Another 35 dams were at risk. The rain event set records all over the state, flooding entire towns. For some locations, this historic rainfall qualifies as a 1,000-year rain event, meaning in a given year there is a 1 in 1,000 chance of observing rainfall totals of this magnitude.

They would like to think that floods of this magnitude won’t happen again for another 1000 years. However, the truth is that with global warming and climate change floods like these are becoming a much more common occurrence, not unprecedented and historical as some have described them.

Gov. Nikki Haley said about 550 roads and bridges were closed in the state, the results of 2 feet of rain in two days. There was looting and power outages. Haley said there had been 175 water rescues in South Carolina, and more than 800 people were temporarily housed in shelters at one period.

More than 400,000 state residents were under a “boil water advisory” affecting about 16 water systems. In the region surrounding Columbia, as many as 40,000 homes lacked drinking water. Mayor Steve Benjamin said 375,000 water customers will likely have to boil their water for “quite some time.” In another image of the storm’s otherworldly toll, state officials said caskets had popped out of the ground in 11 instances in six counties. Nine deaths came about from people trying to drive in flooded areas.

4 Feet of Rain in the Philippines

Typhoon Koppu barreled down on the island of Luzon in the Philippines where it landed as a Category 4 storm with 150 mph winds. Koppu drenched the country’s main northern island of Luzon with as much as 43 inches of rain during its slow, meandering journey across the country. At least 48 were dead, and thousands of people were displaced. Thousands were evacuated.

There was nearly 100 percent damage to infrastructure in Casiguran, where the typhoon came ashore. Philippines news website Rappler reported that  “Electricity and phone signals remain cut off in the area, making it difficult to get supplies and aid to at least 27,000 affected people.” In Baguio City, home to over 318,000 people, nearly 3 feet of rain were recorded. Over 6 inches of that fell in just three hours.

Power outages were reported province-wide during the height of the storm in Pangasinan, Cagayan, Isabela, Quirino, Nueva Vizcaya, Aurora, Nueva Ecija, Apayao, and Kalinga, according to the Philippines National Disaster Risk Reduction and Management Council. The outages affected an estimated 9 million people, or nearly one-tenth of the entire population of the Philippines.

Because it is one of the most cyclone-prone coastlines on Earth, settlement along the east coast of northern Luzon is quite sparse. A large part of the coastline is virtually uninhabited, but Koppu crossed the coast south of the most desolate zone and instead hit Aurora, a province of about 200,000 people that hugs the eastern coastline of Luzon northeast of Manila.

Koppu, the second strongest storm to hit the disaster-plagued Southeast Asian archipelago this year, had forced more than 60,000 people from their homes according to authorities. Residents of flooded farming villages in the Philippines were trapped on their rooftops and animals floated down fast-rising rivers.

The storm that slammed into the high desert and mountains of Southern California in October was one for the record books. Intense rain sent massive mudflows onto highways, picking up cars and pushing them into one another. Hundreds of vehicles were trapped in mud up to 20 feet deep. Some motorists were stranded overnight.

In one spot in the Antelope Valley, the storm dumped 1.81 inches of rain in 30 minutes, in what the National Weather Service described as a 1,000-year rain event. Another 1000 year event? Give me a break. More like a 1-year event, thanks to global warming.

“It’s absolutely incredible,” said Robbie Munroe, a meteorologist with the National Weather Service in Oxnard. One person was pulled from her car dead. Preview of El Nino?

The warm ocean temperatures — about 75 degrees, at least 5 degrees above normal — produced more water evaporation and higher humidity levels. The storm system combined with the high humidity to create enough instability in the atmosphere to trigger the intense thunderstorms and torrential rainfall.

The storm shut Interstate 5 through the Grapevine and sent a sea of mud sweeping through country roads. One of the most dramatic scenes played out on Highway 58 east of Tehachapi. There, mudslides trapped 200 vehicles including dozens of tractor-trailers and at least two tour buses filled with passengers.

In all, the storm left an estimated 300,000 cubic yards of mud and debris on major roadways, officials said.

Especially hard hit was Death Valley which received another 1000 year weather event. Really? The powerful weather system dropped 3 inches of rain in 5 hours, battering historic structures, chewing through roadways and covering the rugged landscape with layers of mud and rocks. It was the wettest October on record in the region which normally receives only 4 inches of rain for the entire year. 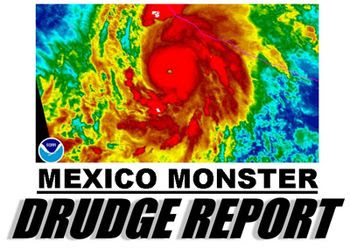 Patricia developed into a Category 5 hurricane with wind speeds up to 250 mph practically overnight. Sustained winds were 165 mph. It was not only the largest hurricane in history, but its intensification was the quickest ever seen. This was attributed to the fact that the Pacific Ocean is 6 degrees warmer than what is normal for this time of year. The warmth of the Pacific Ocean is what is responsible for the extreme typhoons lashing the Philippines and for the El Nino effect that is supposed to bring torrential rain to southern California this winter.

In the final analysis Patricia did not do major damage in Mexico, miraculously. However, Texas got torrential rain and flooding during this same time period from the remnants of Patricia. Some areas got over 20 inches of rain. There was major flooding with over 70 water rescues.

Torrential rains and massive flooding hit Texas in October. As the month ended several million Americans were under flash flood warnings. Six people are known to have died from the storms. Several tornadoes were reported. The state was still recovering from an earlier battering of severe weather, when the remains of Hurricane Patricia swept across the region. The ground was still saturated when the latest storms hit.

Nearly 15 inches of rain fell in Austin on October 30 setting an all-time one day record. The Austin airport was battered by almost 14 inches in 6 hours. That’s more rain than the city received the entire month of May which was already the second wettest month on record! An inch per hour is catastrophic, but over 2 inches per hour? That’s ridiculous. That led to flooding, power outages and cancelled flights.

The rain on the last two days of the month delivered as much as one-third inch per hour, which fell onto waterlogged ground, leading to widespread flooding. The Houston Fire Department said it had made more than 130 water rescues on Saturday (Halloween), and some public light-rail and bus routes had to be suspended. The roads were filled with pumpkins carried away by the storm.

This will be the wettest October on record for Texas. Only a couple weeks before there were drought and wildfires. Extreme weather is an acknowledged effect of climate change, but it is little acknowledged as such by TV weathermen and ladies. Their job is to get eyeballs glued to the tube for commercial purposes. Mentioning climate change might cause their viewers to actually think, and that would be bad for business which wants passive consumers. Disastrous weather events lately have rivaled murder and mayhem in attracting viewers. That’s good for business.

« Can Our Children Learn to Study War No More from Mice?
Conservatives Cry Wolf About Refugee Terror Threat »