;
You are here: Home / Archives for Business / Labor 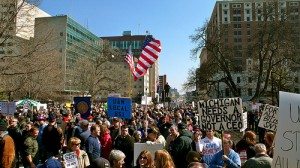 Michigan voters are stuck with the electoral choices they’ve made, whether they like it or not.

Last week the Michigan Legislature slammed through a Right-to-Work bill, becoming the 24th state to have such a law on the books. The lame duck legislators passed it with no debate, no discussion. It was a cookie cutter law that almost word-for-word matched a template provided by the extreme right wing group ALEC (American Legislative Exchange Council). The very next day, Republican Governor Rick Snyder signed the bill into law.

What Right-to-Work laws are purported to do is give workers the “freedom” to not join a union if they choose not to. Conservatives claim that if a workforce is primarily unionized, but if individual workers decide that they don’t want to pay dues or participate in union activities, they shouldn’t have to. If a union is making contributions to a campaign or a particular political cause, the worker shouldn’t be forced (indirectly) to contribute to those causes via his or her union dues. It’s all about choice, they say. It’s about freedom.   [Read more…]