;
You are here: Home / Archives for Columns / El Machete Illustrated 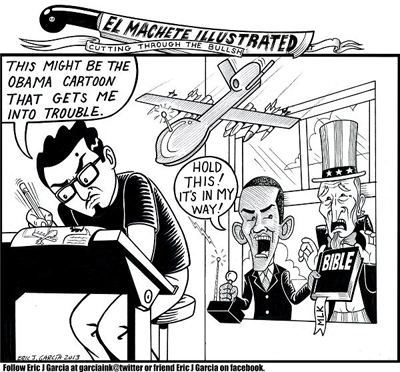 An interview with the political cartoonist

One of the best most incisive political cartoonists working today is Eric J. Garcia. His cartoon El Machete Illustrated offers a sharp and incisive critique of America’s economic and political system, especially the way these systems oppress the poor and immigrant communities. Eric began creating cartoons while serving in the U.S. Air Force, making fun of the military. He completed his MFA from the School of the Art Institute of Chicago, where he won numerous awards to include, 1st Place College Cartoonist Award for both the New Mexico and Illinois College Associated Press competition. Eric’s work can be seen in many national and international publications and online news networks such as In These Times, Hoy Newspaper, and The Black Commentator.   [Read more…]