You are here: Home / Archives for Balboa Park 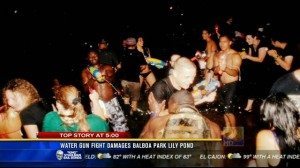 Virtually all the news media in America’s Finest City have been breathlessly reporting on the vandals that trashed the lily pond in front of the Botanical Building on Saturday night. And, at least from what I saw on twitter yesterday, lots of people were very angry about the damage done to the park. Here’s a 39 second video of the chaos that ensued.

What started as a public late night water pistol showdown at the big fountain in Balboa Park got out of hand as a crowd, variously estimated at between 1500 to 2000 people arrived at midnight for the social media driven event. Although some organizers claimed that they originally expected about 100 people, over 6000 invites were sent out via a Facebook event page (since deleted), with over 1000 people RSVPing for the occasion.

The primary organizer for the “2nd Annual Water Gun Fight in Balboa Park” was Ken St. Pierre, until recently Sales Director for San Diego Gay and Lesbian news and San Diego Pix, owned by Jonathan Hale (partner of Carl DeMaio). A recent press release from Hale media indicated that Pierre is leaving that organization to accept a similar position with ultra-luxe Riviera Magazine. The event was promoted in SDGLN last Thursday   [Read more…] 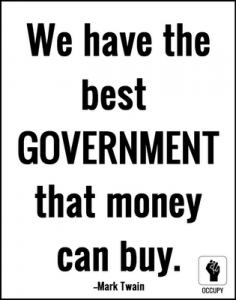 By John P. Falchi
It was good to have spent Monday downtown on one of the hottest issues of our time, the preservation of the historic integrity ofBalboaPark. For some time now the behind the scenes machinations of our local power elite have been working their way toward this day of decision on the part of our S.D. City Council Members. Many members of fine organizations like dan Soderberg’s Neighborhood Coalition to saveBalboaPark, Bruce Coon’s organization,SOHO, and Jeanne Brown’s League of Women Voters, have been fighting the good fight, and were there with members of their groups, yesterday. I was also impressed by the turnout of young people, many from the Occupy Together Movement, locally, who came to lend their support to those who chose to speak against the Jacobs-Sanders Campaign to fundamentally changeBalboaPark.   [Read more…]

A Mother’s Dilemma About Guns in Her Daughters’ Houses

Veterans and G.I. Rights Groups Condemn Use of National Guard in George Floyd Protests as Some G.I’s Refuse to Go

Ocean Beach Paddle Out for Peace and Unity in Solidarity with Black Lives Matter – Sunday, June 7