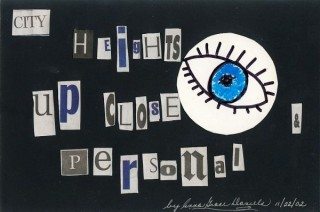 The home my husband and I bought in City Heights over two decades ago is a four mile straight shot along University Avenue from the little house we had rented in North Park for six years. Despite the short distance, the trips east to our new home were initially disorienting. Yes, there were the same low buildings constructed between the 20’s and 40’s lining University Avenue and the uninterrupted march of billboards knitted the two communities together seamlessly with their visual blight.

But North Park, even though it was in the throes of urban decay, still had a palpable urban energy and a diverse concentration of businesses in the area of 30th Street from University to El Cajon. There were small specialty shops, thrift stores and restaurants, and even a JCPenny, all of which attracted a diverse segment of the population in the area. City Heights on the other hand lacked an identifiable destination with a similar broad appeal. In City Heights, circa 1987, there was no there there.   [Read more…]

Author’s note: This is the first post of my new weekly SDFP column City Heights Up Close & Personal. It is the distillation of my experiences and observations of the confounding, sometimes dazzling and always changing urban landscape that I call home.

“We are children of our landscape; it dictates behaviour and even thought in the measure to which we are responsive to it.” Lawrence Durrell, Justine

“We’re not in Kansas anymore Toto.” Dorothy, The Wizard of Oz

For the past twenty five years My Beloved and I have lived in a postage stamp size home that we own in City Heights. Our street is in constant motion with pedestrians and cars moving between the wide thoroughfares of University Avenue and El Cajon Boulevard. Two of the most common sounds are the trash trucks in the alley and moms calling out apúrate (hurry up!) to their kids lingering on the sidewalk. There is very little that is unified or uniform about the physical landscape or the people who live here. That is what I love about City Heights. That is what I also hate about City Heights.   [Read more…]