You are here: Home / Archives for Midway 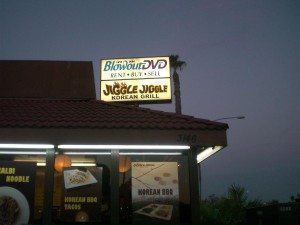 Several days ago a request was made by one of our readers to do a review of  Jiggle Jiggle. She said the food was good; inexpensive; and the “mom/pop” running the restaurant are from Korea. It should be noted that this is not a Korean BBQ. There are no hot pots or woks on the table for you to do your own cooking. Rather, it is all done for you in a most delicious way.

I have a Korean student living with me to learn English – Monica – and some of you have already read about her problem with Wells-Fargo. Monica has been with me for almost 9 months. I also have a Japanese student – Yuko – who has only been in the United States 2 weeks, and when my two students get together they spend a great deal of time in a “giggle” mode. It truly is a kick to be around them, and you find yourself smiling with them most of the evening.  Tonight was no exception.   [Read more…] 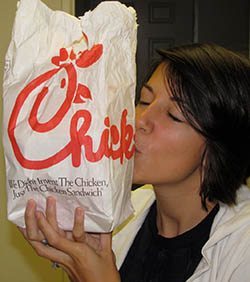 The national Chick-fil-A controversy rolled into the San Diego media headlights yesterday as thousands of people lined up to buy deep fried chicken sandwiches at local outlets. Some felt they were making a statement (incorrectly, as it turns out) in support of the first amendment, as some big-city mayors have publicly stated that Chick-fil-A would not be welcome to set up shop in their cities. Others joined the lines at the fast food outlets because of religious beliefs. And still others were motivated by deeper feelings of animosity towards homosexuals; feelings that most of us would describe as outright bigotry.

The UT San Diego’s Roger Hedgecock, coming off of an on-air love-fest with publisher Doug Manchester (don’t worry, it was very manlyfawning), aired taped interviews with customers from the restaurant’s midway district location. He went on to describe the Chick-fil-A ‘Customer Appreciation Day’ as part of the battle against the ‘homosexual agenda’, warning that ‘they’ were trying to take over.   [Read more…]