;
You are here: Home / Archives for San Onofre

It may be the season for shopping for consumers. It may be a time to recharge for political campaigners. But for the anti-nuclear activists in the region it’s time to intensify their efforts. Inside are a half dozen programs, protests and events compiled by the Peace Resource Center for the coming days. Remember to make your holiday season about more than a trip to the mall.
[Read more…] 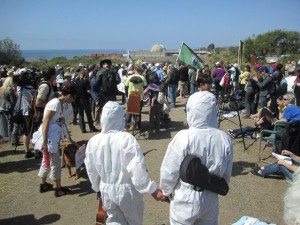 On the facebook page of a well-known anti-nuke activist was this:

The California Public Utilities Commission voted 5-0 today (Thursday) to institute an “OII” instituting a an “order of investigation” into costs and issues raised by the extended outage of San Onofre Nuclear Plant Units 2 and 3. Congratulations to all who turned out today to urge the PUC to take this action! The Scope and extent of the OII was/is NOT a foregone conclusion—our grassroots spotlight on this is building the momentum for REAL investigation and substantive action. Our coalition’s press conference was well attended.   [Read more…] 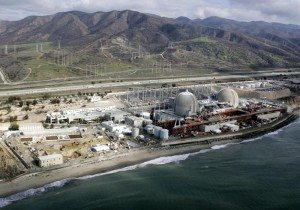 ” A strong majority of Edison customers want to keep San Onofre shut down and almost half don’t trust Edison to put safety before profit,” environmental group Friends of the Earth reported on October 1.

Friends of the Earth (foe.org) commissioned David Binder Research to carry out the poll. The company talked to 700 registered voters in the counties San Onofre provides electricity to.

The results: “58% of respondents said they oppose reopening the plant…Only 32% said San Onofe should reopen,” Friends of the Earth reported.   [Read more…] 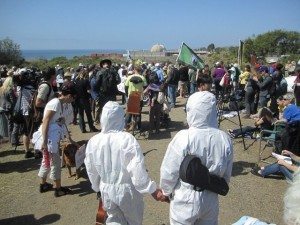 Monday’s notice that San Onofre’s owners are laying off 730 workers—one third of the workforce—is yet another indication of a nuclear power plant in severe distress.

Both formerly operating reactors have been shut down since January due to revelations that key components called steam generators had rapidly and largely turned into junk. In following months promises of restart from the company have repeatedly been pushed back.

On July 31 Huff Post LA reported that this crisis had cost the plant “at least $165 million” at that point. This figure consisted of “$48 million for inspection and maintenance costs” and $117 million “to buy replacement power.”   [Read more…] 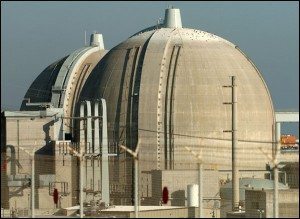 One of the items approved on the agenda of the California Democratic Party’s Executive Board meeting in Anaheim this past weekend was a resolution that calls for an independent design review and public hearing before the Nuclear Regulatory Commission decides to restart either Units 2 or 3.

The resolution was a compromise worked out between anti-nuke activists and labor advocates over the San Onofre Nuclear Power Plant since its outages earlier this year. Here’s the final wording:

Based on a final consensus between anti-nuke advocates and the Labor Caucus of the state party, the resolution is remarkable because for the first time since the crisis at San Onofre, labor advocates and union reps have come together to address the array of issues that has been forced upon them.   [Read more…]