You are here: Home / Archives for Tijuana 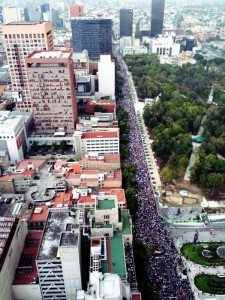 Mexicans turned out in twenty cities throughout that country on Saturday to protest against the electoral victory of president elect Pena Nieto. They accuse Nieto’s party, the Institutional Revolutionary Party (PRI), of buying votes; some carried banners saying “Not another fraud”. He was declared the winner last week after a recount of nearly half the votes and denies the allegation, as he has with repeated scandals that threatened his career. It turns out he’s quite the cad, with extra baby mommas and recreational hookups galore–Ashleymadison.com, the dating website for married people, proudly put Peña Nieto on a billboard in Mexico City, saying, “Unfaithful to his family. Faithful and committed to his country.”

Numerous videos have emerged of Mexicans claiming they received gift cards in exchange for voting for the PRI; some even claim they are coming forward because they were shortchanged. Aljazeera cites Eduardo Huchim, formerly a senior official with the Electoral Institute of Mexico City, and currently a monitor with Civic Alliance, a UN-funded watchdog, as telling the Reforma newspaper that the July 1 election was “perhaps the largest operation of vote buying and coercion in the history of the country”. Voters inMexico City, an opposition stronghold, have been posting pictures via Twitter of alleged ballot tampering.   [Read more…]