I love the idea of cycling all over town and the trend to encourage people (and currently women, in particular, to ride bikes.

Ideas are great, but as a result of biking in Mission Valley, Old Town, North Park, Downtown, College Area, City Heights and various parts of the city, I definitely have a new take on what it means to share the road with vehicles. I used to ride my bike frequently until I was knocked off by a driver. Thankfully, I was not injured but after that, I limited my rides to mountain biking and bike paths where road sharing is not an issue.

I decided that it was time to start riding on city streets again last year. Riding my bike on El Cajon Boulevard, I must admit, can be daunting. Depending on where you are riding, some of the lanes are so narrow that the cars parked on the street will position a cyclist in the middle of the lane for vehicles meaning that we literally must share the same lane with vehicles. The traffic is quite rapid and, in my experience, people are fairly hasty and do not drive in a manner or speed that promotes comfortable riding of a bike in the middle of the street. I noted the streets have designated lanes for the bikes; however, these lanes are in or near the same spaces along with vehicles. While I have noted more courtesy among drivers, I still think there should be a designated area specifically for bicycles.

El Cajon Boulevard has made some changes, added new businesses and other positive activities. I have noticed more activity in the 30th to 40th blocks. I do not see that many people walking the streets however. So, since we have a large number of families and children in the area, I wonder: what can we do to encourage even more transformations that would include positive, family-oriented activities for everyone. A few times I have seen children riding their bikes on the sidewalks of El Cajon Boulevard and University Avenue. I like the idea. I like the idea even more since we have witnessed such as the prostitution and other activity that many associate with the area.

I feel bicycle riding should be legal on the sidewalks, too, considering how dark the streets are (side streets too, in City Heights and College Area) and the lack of space for sharing the road in these areas. The sidewalks are broad enough for considerate bike riding and simultaneous pedestrian use, when needed.

Overall the streets in many neighborhoods need more lighting and better alternatives for safe bike riding for people (including elderly and children). I love the idea of promoting cycling as a way of life in our city but more changes will need to be made to integrate cyclists into the transportation system. Here are a few things that I have been thinking about as a result of some of my rides and talks with people (especially those who live in the City Heights and College Areas). 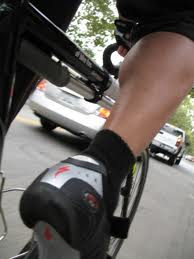 I used to think of biking as relaxing and leisurely. After riding throughout San Diego’s Downtown and inner-cities, I feel like you definitely have to take on a more defensive approach when sharing the road with cars. I do feel that people have been more accepting of sharing the road in some parts of the city, but not all. On a bike (as well as on foot while running or walking), I feel I have to be ready for anything and everything — expecting folks NOT to see you, because many times, they do not. That’s why I feel it is even more important for designated and protected biking lanes.

I’m not quite sure how this idea of biking to work is going to play out, given the fact that the clothes most wear to work will not really be conducive to riding a bike, depending on one’s career. If you stuff your work clothes in a backpack, it is likely that they will be wrinkled so that sounds like an opportunity for a clothing designer! More options in terms of clothing that are suitable for biking and the workplace (business casual?) will certainly be beneficial.

Where will be the bike be stored upon arrival at your destination?

SANDAG says they have a lock for bikes (which I have not yet used). I have not met anyone yet who has used it. If you have used it, I wonder what your impression is of this locker system.

I noticed that most establishments do not have an area for people to lock their bikes upon arrival. How can we work this into the equation. Having a place for bike riders to lock bikes will be extremely useful and make it much easier for us to show up on a bike.

Putting the bikes on trolleys?

There really isn’t enough room for more than two or three people to have a bike on each car due to the design and sharing with passengers. How can we adjust this? 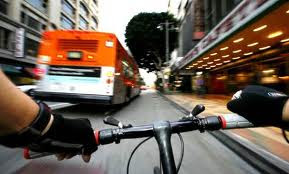 Overall, when I talked to residents, school employers and those who work in the areas — particularly from the City Heights, College Area and Rolando neighborhoods, the lack of street lighting, potholes and overall safety — especially during evening hours (i.e., street crimes solutions to help with safety concerns dealing with the elderly, children and single women’s safety) continue to be issues that need to be addressed.

In addition to biking conversations, people wanted to talk about the overall health of the neighborhoods. I feel that these issues belong in the same conversation that deals with community health. Some residents felt that the types of businesses need to be more diverse, that is, the neighborhood could be transformed by encouraging a variety of businesses such as florists, wellness centers, live music venues, yoga studios, cafes, dining establishments and the creation and use of spaces that bring people together as well businesses that have something different and positive to offer to the community. Perhaps these diverse businesses would encourage a different approach to family cycling as well.

Latest posts by Source (see all)