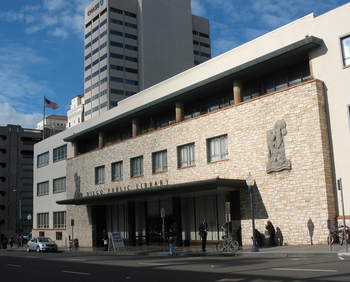 San Diego has a flashy new Central Library and it’s all paid for without taxpayer funds thanks to local philanthropists. I wrote in another article about the Grand Opening. But that brings up the question: what are we going to do with the old library, a historical landmark, that sits vacant on E Street downtown across from the Post Office.

There have been some suggestions. Interim Mayor Todd Gloria stated: “As soon as we open up that new facility, I want to make sure we have a plan in place for the old facility, and make sure that we put it back into a useful life for the citizens, the taxpayers, and of course the residents of downtown.”

Well, the new library opened September 28, 2013, eight long months ago, and there are no plans at this time for doing anything with the old building which is increasingly turning into an eyesore. We are coming up on the one year anniversary, June 9, of the closure of the old library and still there are no plans for it. The longer it remains vacant, the more it might share the same fate as the California Theater, also designated an historical landmark, which is literally rotting away. Nobody wants to put up the money to restore it to its former glory so it just sits there, an eyesore.

Why not convert it into studio apartments for homeless people in accordance with the Housing First vision. I wrote in a previous article, A Challenge to Kevin Faulconer: End Homelessness Now:

You kibitz with the homeless in your campaign ads. Now that you’re Mayor Kevin Faulconer, are you really going to do anything about it? Or are you going to continue to procrastinate. Other cities are ending homelessness from Phoenix to Salt Lake City to Nashville.

These cities and others have decided that treatment and supportive services should not be conditions or precursors to permanent housing. Instead, the very ability to address personal mental health goals, beat addiction and gain stable employment stems from the safety and stability that comes from having a permanent home. This approach is called Housing First.

Well, K-Faulk, here’s your perfect opportunity to put your money where your mouth was. This would be the perfect use for the old building – put all the homeless people that are sleeping outside it … in it. There’s no conflict with the historical designation bit. While historic designation can sometimes be a hindrance to development, Bruce Coons, Executive Director of Save Our Heritage Organization, believes that the building will not have trouble working around any historic constraints. “It can be anything four walls and a roof can be,” he said. 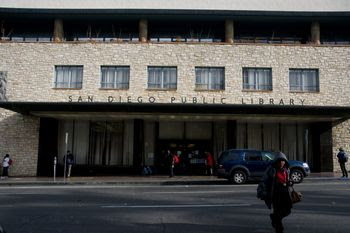 According to Voice of San Diego, the East Village Residents Group recommended the following alternatives:

• Permanent (or interim) home for the YMCA

I suppose all these alternatives would mean privatizing what is currently a public asset and selling it off. As apartments for the formerly homeless in accordance with Housing First principles, a public asset could be used to help solve a public problem.

It has also been proposed to use the space as a “neighborhood mixed-use center” in accordance with the San Diego downtown community plan. This would require that a certain percentage of the street level be used for commercial recreation and entertainment such as restaurants, theaters and retail. Just what we need – more unoccupied street level restaurant and retail space in downtown! 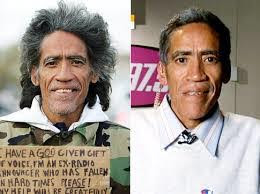 And if there are no moral qualms for leaving people to sleep on the street, how about the financial incentives for getting them off the street. It has been found that the homeless consume more tax dollars in emergency services and incarceration costs than they would if the taxpayers just paid for an apartment for them. A study in Florida showed that, when accounting for a variety of public expenses, Florida residents pay $31,065 per chronically homeless person every year they live on the streets vs $10, 051. to house them and pay for treatment.

Most homeless persons, given half a chance, clean up and become productive citizens again as has been attested to by before and after pictures more of which can be found here.

Andrae Bailey, CEO of the commission that released the Florida study, noted that most chronically homeless people have a physical or mental disability, such as post-traumatic stress disorder. “These are not people who are just going to pull themselves up by their bootstraps and get a job,” he said. “They’re never going to get off the streets on their own.” Without some help from society, that is.

What the East Village residents, whose only interest is self-interest, don’t understand is that creating permanent housing for the homeless will get them off the streets and make East Village a more salubrious location for residents and visitors alike as well as providing a housing solution for the least fortunate among us. And it’s cheaper to provide permanent housing (as opposed to sheltering) and supportive services than it is to leave them on the street and pay for emergency room visits and police services.

« What Does ‘Clean Elections’ Really Mean?
Continuity of Care in Danger for Seniors and People with Disabilities »