His parents were not able to afford the level of pre-school instruction that the other members of his kindergarten class evidently received. It’s amazing that now they expect kindergarten children to do first or second grade work with spelling tests and homework every day. When I went to kindergarten, the only thing expected of us was that you would learn to tie your shoes.

His case is not so much a case of racism as it is a case of being raised in relative though not extreme poverty. The only reason it wasn’t extreme was that there were extended family resources available to them.

That isn’t always the case for many African American or blended families. Many black children, and in particular black male children, are raised in extreme, unremitting poverty. In many cases a family member is in jail. It could be a father, an uncle, a brother, a cousin. Going to jail is a very common experience for African American families. The root cause is that many of them have had meager job training and very limited employment opportunities. Most are in jail for minor drug offenses. If marijuana were to be legalized, the prisons would empty out.

America has less than 5% of the world’s population but about 25% of all prisoners. There are more African American males in jail now than there were working as slaves at the height of slavery. And they are not the only ones punished for minor drug offenses. Their families are punished as well. Their children are denied the opportunity of having a father in the home. Their wives are denied the opportunity of having a breadwinner other than themselves in the family. In 2008 one in a hundred American adults was behind bars.

According to Glenn C. Loury in an article in Washington Monthly:

America, with great armies deployed abroad under a banner of freedom, nevertheless harbors the largest infrastructure for the mass deprivation of liberty on the planet. We imprison nearly as great a fraction of our population to a lifetime in jail (around seventy people for every hundred thousand residents) than Sweden, Denmark, and Norway imprison for any duration whatsoever.

That America’s prisoners are mainly minorities, particularly African Americans, who come from the most disadvantaged corners of our unequal society, cannot be ignored. In 2006, one in nine black men between the ages of twenty and thirty-four was serving time. The role of race in this drama is subtle and important, and the racial breakdown is not incidental: prisons both reflect and exacerbate existing racial and class inequalities. 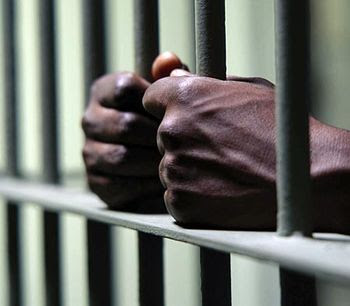 The so-called “war on drugs” has resulted in large numbers of African American males ending up in prison while a few decades ago marijuana was perfectly legal and alcohol was outlawed.

Prohibition of alcohol consumption started in 1920 and ended in 1933. Up until 1933 marijuana consumption was perfectly legal. As soon as they made alcohol legal again, they started Prohibition of marijuana. The arbitrariness of the laws has determined that large segments of the African American population have become outlaws when their grandparents and great grandparents lived during a time when their recreational drug of choice didn’t result in breaking the law. At that time marijuana was part of African American culture and remained so to a large extent after it was outlawed.

Now serving time in prison has become part and parcel of the African American experience. As Loury says, “… the ubiquity of the prison experience in some poor urban neighborhoods has had the effect of eliminating the stigma of serving time.”

In these poor neighborhoods on any given day there are as many as one in five African American males in jail. Children grow up with the knowledge that a family member or someone they know is spending time behind bars. Such is the epidemiology of African American poverty. As in my grandson’s case, his having to repeat kindergarten was more a function of his parents’ relative poverty which resulted in their not being able to afford preschool for him than it was because of the fact that he is African American.

And this suits the interests of the prison-industrial complex just fine. They employ lobbyists to encourage lawmakers to pass even stricter laws criminalizing as many things as possible. Why? the more people serving time, the greater are their profits. And they have been hugely successful! Private prisons have spent millions on lobbying to put more people in jail. From less than 300,000 inmates in 1972, the jail population grew to 2 million by the year 2000. “Three strikes” laws have led to an aging prison population. Many of these prisoners will never see the outside world again, and, if they did, their lives would be entirely dysfunctional as they are completely adapted to prison life and maladapted to living outside of prison.

According to “The Prison Industry in the United States: Big Business or a New Form of Slavery?”:

Private prisons are the biggest business in the prison industry complex. About 18 corporations guard 10,000 prisoners in 27 states. The two largest are Correctional Corporation of America (CCA) and Wackenhut [ed.note: now called GEO Corporation], which together control 75%. Private prisons receive a guaranteed amount of money for each prisoner, independent of what it costs to maintain each one. According to Russell Boraas, a private prison administrator in Virginia, “the secret to low operating costs is having a minimal number of guards for the maximum number of prisoners.” The CCA has an ultra-modern prison in Lawrenceville, Virginia, where five guards on dayshift and two at night watch over 750 prisoners. In these prisons, inmates may get their sentences reduced for “good behavior,” but for any infraction, they get 30 days added – which means more profits for CCA. According to a study of New Mexico prisons, it was found that CCA inmates lost “good behavior time” at a rate eight times higher than those in state prisons. 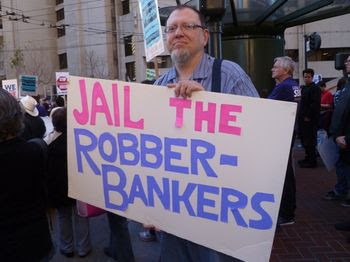 Finally, we wonder why no bankers went to jail after committing massive fraud and other white collar crimes during the 2008 recession involving billions of dollars while huge numbers of African American males are in prison for possessing microscopic amounts of drugs. Mat Taibbi thinks it’s because there are two standards of justice in American society. The poor are criminalized while the rich can do no wrong. It is a society in which “money talks and shit walks.” He says in his book, “Divide, American Injustice in the Age of the Wealth Gap“:

We’re creating a dystopia, where the mania of the state isn’t secrecy or censorship but unfairness. Obsessed with success and wealth and despising failure and poverty, our society is systematically dividing the population into winners and losers, using institutions like the courts to speed the process. Winners get rich and get off. Losers go broke and go to jail. It isn’t just that some clever crook on Wall Street can steal a billion dollars and never see the inside of a courtroom; It’s that plus the fact that some black teenager a few miles away can go to jail just for standing on a street corner, that makes the whole picture complete [or in Trayvon Martin’s case walking home with a bag of Skittles].

The great nonprosecutions of Wall Street in the years since 2008 … were just symbols of this dystopian sorting process to which we’d already begun committing ourselves. The cleaving of the country into two completely different states – one a small archipelago of hyperacquisative untouchables, the other a vast ghetto of expendables with only theoretical rights – has been in the works a long time.

And as every individual who’s ever been charged with a crime knows, anyone facing criminal arrest can expect collateral consequences. A single drug charge can ruin a person’s chances for obtaining a student loan or a government job. It can nix his or her chances of getting housing aid or a whole range of services – even innocent members of your family may lose access to government benefits. You can lose your right to vote and your access to financial aid. You can even have your children taken away.

I’m hoping that my grandson will somehow escape the cultural propensity and milieu that seems to redound to some members of his ethnic group or rather one of his ethnic heritages. After all he didn’t grow up in the ghetto; he’s a naturally smart and spirited little boy.

That doesn’t mean he will adapt well to society’s norms as exemplified by the school system which tends to penalize people with his set of talents and personality traits regardless of race if they don’t conform. The school system has a tendency to dispirit spirited people in an attempt to get them to be docile and compliant. And if they’re hyperactive, they want to drug and sedate them with Ritalin in preparation for an adult life dependent on prescription or street drugs.

He has two older sisters that seem to have the talent and intelligence to transcend society’s norms regardless of race. One has been in the gifted class since she started school and the other is on the honor role. An even more positive prognosis is that his parents are back together after a four year interlude and finally pulling themselves out of poverty.

However, there are many others that could be constructive members of society if they were only able to obtain a little outside help which, unfortunately, too many do not have access to. As Billie Holiday said,”Papa may have. Mama may have, but God bless the child who’s got his own, who’s got his own.”