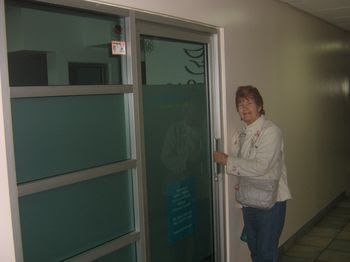 Judy hadn’t seen a dentist in some time and she needed to go. I tried to persuade her to go to my dentist, Dr. Miguel Garcia in Tijuana, but she had a fear of crossing the border. I had been going to Dr Garcia for 10 years or more, and I told her she had nothing to fear.

Everybody in Dr Garcia’s office spoke perfect English. They had the latest, most modern equipment and the best training. My friend Olof who had been going to Dr Garcia for years on my recommendation also tried to persuade Judy that there was nothing to be afraid of. She would be in good hands.

Finally, Judy agreed to go. I had assured her I knew the way by heart, and we could drive right into the building to park. Then it was just a short walk to the elevator. We’d be on the fourth floor and in the Baja Oral Center in no time.

It was just a 40 minute drive from our home in El Cajon. The problem was though that they hadn’t fixed the border yet; it was still under construction. After going across the border we came out on a street unfamiliar to me. In short we immediately got lost. It was Judy’s worst fear.

Judy said, “Just take me home.” I said, “No, I think I can find it.” After driving around for some time in a state of confusion, we finally stumbled on Plaza Pacifico Building on Jose Clemente Orozco Street just off the main drag of Paseo de los Heroes. It’s close to the Abraham Lincoln roundabout so I guess our Abraham Lincoln was a Mexican hero because he was against the Mexican-American War in which Mexico lost considerable territory. There’s also a statue of Lincoln in Juarez, dedicated in 1966 by President Lyndon Johnson. The U.S. received a statue of Benito Juarez in exchange, which is in Washington, D.C. Juárez and Lincoln exchanged friendly letters during the American Civil War.

It was well past our appointment time when we finally found the correct location. But by this time Judy was beside herself. “Just take me home”, she repeated. I said, “We’re here now,” but Judy wanted to go home anyway so I relented. We navigated the return route with some difficulty, but after an hour and a half wait at the border, we were finally on our way back to El Cajon.

Judy said she’d never go to Mexico again. So I agreed to take her to a dentist in El Cajon. The initial exam was $285. OK, but Dr. Garcia doesn’t charge for an initial examination. After the exam the extensive dental work required to get Judy on the right dental path came to thousands of dollars.

We decided to wait. After all Judy was in no pain. She qualifies for Medi-Cal, but, unfortunately, Medi-Cal didn’t cover dentistry at that time. About a year later we were informed that Medi-Cal was bringing back dental benefits. It is called Denti-Cal. We waited for the advent of the date of coverage with baited breath, and then went back to our El Cajon dentist. However, all the dental work Judy needed turned out not to be covered by Denti-Cal! They covered certain root canals – just not in the teeth that Judy needed them. The first order of business was to be the cleaning, and for that the charge was a heart stopping $900! We decided to take a pass. 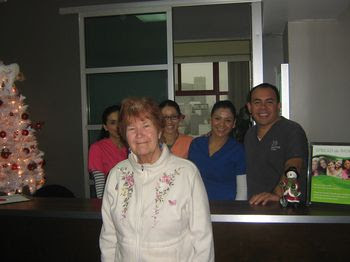 After considerable time had passed, Judy had a change of heart about visiting Dr Garcia’s dental office in Tijuana. She all of a sudden got more adventurous. A further incentive is that by this time the border had been fixed and wait times were considerably shortened – 10 to 20 minutes. The San Ysidro Port of Entry is the busiest land port of entry in the western hemisphere. 50,000 northbound vehicles are processed each day. 25,000 northbound pedestrians cross each day. Coming into Mexico there is no wait at all. The bottleneck was always going back.

But now the port had been expanded and modernized. There were 38 additional vehicle inspection booths. The port was now the “Port of the Future” featuring sustainable design and technology. The San Diego U-T reported on September 17, 2014:

Many drivers accustomed to waiting in line for hours instead sailed through the busy border crossing within minutes on Wednesday.

What made it possible was the reopening of seven inspection lanes — and the completion of a key phase in the $741 million reconstruction of the massive port, the busiest on the U.S.-Mexico border.

The expanded capacity in the primary inspection lanes means that U.S. Customs and Border Protection, the agency charged with operating the port of entry, now has at its disposal 25 rebuilt inspection lanes with total of 46 booths. And that’s just the beginning: By January 2018, the port is expected to grow to 34 lanes with 63 booths.

“This is incredible. I can’t believe it. There’s something like 15 cars ahead of me,” said Marco Montano, as he waited early Wednesdayafternoon to cross in the general lanes, which are usually the longest. He and a friend were heading from Tijuana to San Diego to purchase a bus part and had been prepared for the usual wait of two to three hours — not 10 minutes. 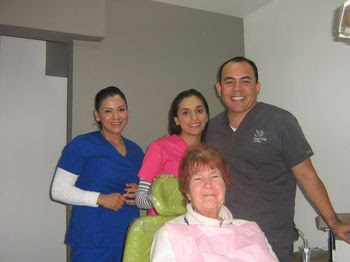 Now it’s almost impossible to get lost going to and coming from Dr. Garcia’s office, and Judy was ready to make the trip again. We were inside the Plaza Pacifico Building within 40 minutes from our home in El Cajon. We took some food and water with us in anticipation of the return trip which would be right around lunch time. Things went so well though that now Judy wants to eat at one of the nearby restaurants next time we go. Judy was immediately impressed by the friendliness and cheerfulness of Dr. Garcia and his professional staff. Judy was most concerned to have a replacement tooth for one that had fallen out. Dr. Garcia gave her a thorough examination, and then two young women went to work cleaning her teeth. Total cost for the visit including the cleaning – $60.

$60. for dental cleaning in Tijuana versus over $900. for the same job in El Cajon! We couldn’t believe the difference in pricing between Mexico and the United States. Dental insurance in the States might have brought the price down, but it is my experience that dental insurance is mainly a joke. It covers the inexpensive stuff, but not the major dental procedures. And there’s a yearly cap after which you’re on your own. 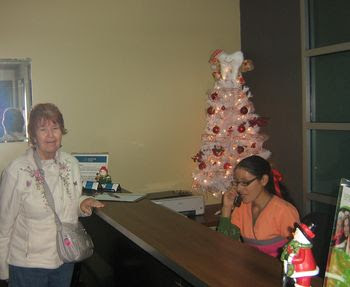 The Baja Oral Center offers a complete list of dental services from fillings to crowns to implants. There are a lot of doctors, dentists and specialists in the Pacifico Plaza Building that Dr. Garcia works with. For instance, root canal specialists are close by. They all speak fluent English, use the latest techniques and equipment and are super friendly. More people are spending their money on a trip to San Diego for a vacation and a side trip to the dentist in Tijuana than on the expensive dentists in the US.

Judy felt so comfortable that before we left with a return appointment scheduled, she was joking and laughing with Dr Garcia and his staff. She looks forward to her next appointment and a good meal at one of the nearby restaurants. Before long she’ll probably want to spend some time shopping at the nearby shopping center. The return trip was a breeze – just a straight shot down Paseo de los Heroes to the border. As we entered the US, Judy turned to me and said, “I like Dr Garcia.”

« Looking Back at the Week: Nov 30-Dec 6
People Rise Up: The Streets Are Alive with the Sound of Movement »