You are here: Home / Archives for Anna Daniels

Who do you think promulgated this video, Trump or Kim Jung-un? If your first impression is that this is a North Korean propaganda video, you are not alone. Seeing the White House icon with WH.GOV beneath it is pretty damn chilling. And the propaganda machine is fueled with our taxes.   [Read more…]

Here are some frequently asked questions about election day voting in San Diego County. In order to vote, you must be a U.S. citizen, at least 18 years of age and you must already be registered to vote. There is no same day registration in CA.

Come inside for much more information…   [Read more…]

Part of a Statewide and National movement

National City Families for Fair Housing, a coalition of community groups, is currently gathering signatures to put a rent control measure on the November ballot.

If they successfully gather the required 2,225 signatures, the ballot measure will cap annual rent hikes at 5%, enact rules for just cause evictions and establish an independent board to administer and enforce the measure.

National City has become San Diego county’s ground zero for addressing the failures of a market-driven approach to housing and the complicity of elected representatives in that failure. Renters in National City saw a median rent increase of 15% between 2015 and 2016; the City has filed an unusual lawsuit to kill the rent control effort before it reaches the November ballot.   [Read more…]

The following article appeared in the Advocate Newspaper from Burnie Australia on January 9, 1934. The football field and other sport venues have long been a politicized space.

While we seldom think further back than to Tommie Smith and Juan Carlos raising a fist at the 1968 Olympics game, it should come as no surprise that the exertion of raw institutional power in sports— nationalistic as well as racialized, and I would also add gender based, is not particularly new or only an American occurrence.   [Read more…]

SDFP editors Annie Lane and Doug Porter are taking a well deserved, week long vacation. Editor (and husband) Rich Kacmar and I have assumed the control panel in their absence. If everything had gone as intended, our line up today would not be noticeably different from prior days, with the exception of the absence of Doug’s Starting Line column.

But the day has not gone as intended. In between posting and an attempt at writing was the morning feeding of a cat colony which includes outside cats and inside cats. When Orlando, one of the outside cats, did not show up for breakfast I carried his food tray out to the back yard where I found him intently looking at something by the garage. A tiny black kitten was tucked into the grass next to the garage.   [Read more…]

The Poet as Witness

During the 1950’s Philip Levine was working in Detroit auto plants and writing poetry. In an interview at that time in Detroit Magazine he described how he found his compelling subject material. “I saw that the people that I was working with…were voiceless in a way. In terms of the literature of the United States they weren’t being heard. Nobody was speaking for them. And as young people will, you know, I took this foolish vow that I would speak for them and that’s what my life would be. …I just hope that I have the strength to carry it all the way through.”

They Feed They Lion was written in 1968, when Levine returned to Detroit following the race riots of 1967. It is one of his finest poems, reflecting the degree to which he found “the strength to carry it all the way through.” The poem is merciless in its judgements and propelled by the rhythmic insistence of the language itself.   [Read more…]

“If you can sail to Catalina,” someone once said to me, “you can sail around the world.” — From Where We Sail

The road trip is a well-established genre in America’s literary cannon, and San Diegan Dianne Lane’s recently released memoir From Where We Sail is an engaging narrative within this literary tradition. The full title of the book includes the additional description: A Family’s Six and a Half Year Journey Around the World on Sorcery.

Dianne dedicates the book to her family and “beloved Sorcery who brought us home.” Sorcery, their 61-foot sloop-rigged sailboat, is as much a character in the memoir as her husband Robb and their young children Alex and Annie.   [Read more…]

It is illegal for public employees to strike in the state of West Virginia. The teachers have gone all-in anyway, and are currently in the eighth day of a wildcat strike that encompasses all of West Virginia’s fifty-five counties. The state’s legislators have rejected the agreement that Governor Jim Justice presented last week that would have returned students to their classrooms. It doesn’t appear that the strike will end any time soon. Nor will the striking teachers’ commitment to providing food to the one in five students who live in poverty in their districts end soon either.

Teacher salaries in the state rank forty-eighth in the US. One teacher noted that a manager at a fast food restaurant close to her school makes more money than she does. According to recent data from the Department of Education, “teachers tend to be white, female, and have nearly a decade and a half of experience in the classroom.”

Once again we see a female dominated profession pushed into penury while at the same time reaching into their own limited resources to continue helping their students.   [Read more…]

What does “it” mean?

It was hard listening to the remarks today from Parkland students who survived a school shooting a mere week ago; it was devastating listening to the father of one of those students who was murdered tell us that he visits his daughter in the cemetery now. It was also a heart crushing rebuke to hear from parents who had lost a child at Columbine (19 years ago) and Sandy Hook Elementary (5 years ago).

When everyone who wanted to speak was heard, Trump asked if there were any recommendations about what should be done. An adult (who was that guy?) was ready to jump in with a solution—more guns! Arm the cafeteria worker, volunteers or guidance counselors if teachers didn’t warm to the idea.   [Read more…]

When Teresa Gunn performs her one woman show Teresa Gets a Boyfriend at City College’s Saville Theatre on Saturday, February 24, she will take on the universal and often time worn themes of looking for love, finding love and trying to keep love.

Creative storytelling makes old stories new and Teresa Gunn is a consummate storyteller. Twenty years ago the San Diego recording artist and educator undertook a series of one woman performances as fundraisers for the nonprofit Musicians for Education/Street of Dreams. She refers to this series as the Trailer Park Queen Project.   [Read more…]

It is confounding that the words “ballistic missile threat inbound” and “Hawaii” would appear in the same sentence. If it feels as if something has gone terribly wrong that we awaken or go to bed in a state of existential terror as Trump plays who’s got the biggest baddest button with North Korea’s Kim Jung Un, it’s because something is terribly wrong. 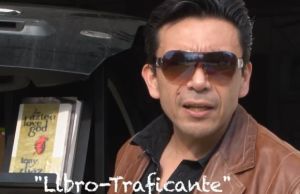 San Diego Has a New Boss. Uh Oh…Looks Just Like the Old One