You are here: Home / Archives for Micaela Shafer Porte

San Diego, Pacific Beach, local artist, activist and writer. Better to bee than not to bee; live and let live/vivre et laissez vivre; preserve natural spaces, and your yard, without poisons, protect the smallest creatures on the planet and they will protect us. Think future, think small.

I come not to bury the San Diego Free Press, but to praise it.

I believe in the resurrection of the soul of this Press for the people of San Diego, and the world.

Brief, shining moments have a way of sticking round in our hearts, like Camelot.   [Read more…]

Carrying water has always been the women’s task. From the stream, the river, the well, to the house, for cooking , washing, cleaning. And still it is today in many countries around the world.

The point being, “the dawning” takes some time,and in the scope of 2000 years, a dawning may take many generations. And our planet , and our lives, is all about water.   [Read more…]

The World at Play and the US isn’t there. Ah, gee..

Saudi Arabia and Russia are kicking it off, opening the games, June 14.  How humorously ironic, our arch-« enemies » from the past-present, not that anyone in the US cares, because we are building The Wall and we aren’t in The Games.  I bet that Russia wins the opening match.  I’ll be watching. It is decidedly agreed by the soccer powers that the hosting country (Russia 2018) will make it to the semi-finals, at least.  That’s the least one can do for the hosting country, n’est-ce pas?

Like we boycotted the Russian Olympic Games of 197whatever…because they were warring with Afganistan, god bless them, the English tried it and failed, we tried it and failed…too bad Afganistan doesn’t develop their soccer league, they would champion! And even though the Russians are hacking our computers and influencing our politics, according to the press who are quoting The Initials (NSA, CIA, FBI..), we still, or perhaps because of, didn’t make the playoffs.

Is that the fault of Trump? I thought they liked him? well, God bless America, my home sweet home. Better luck in four years.   [Read more…]

I imagine he is managed by many smart women,
Because I never hear him mention any particular opinion,
Except that he’s In Favor and that All is Well,
Then to hand the floor over to
Accompanying Security Personnel.   [Read more…]

The drunken man, his home under the acacia tree on the library plaza,
Last night, laid himself down to die after a few bottles.

Next morning around 11,
Al, the guard, noticed him,
And called Christina the Librarian,
Who called 911 and more,
Ran to get the defibrillator.   [Read more…] 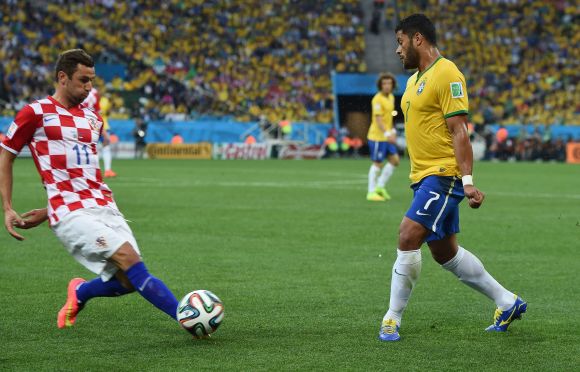 There I was, Thursday morning June 12, worrying about security in my hometown of Pacific Beach, the highest crime area in the city of San Diego. I was wondering how to interpret the previous evening’s powder-puff security forum at PB Middle School hosted by the new chief of police, Shelley Zimmerman and new temporary “everyman” council person/ lifeguard lieutenant, Ed Harris. Still mulling over the layers of bureaucracy that muddle the question of “who’s in charge now?” all of a sudden, I remembered.

I remembered what I’d been telling myself not to forget for the past several busy months. The Thing. The World Cup of Football(Soccer). Yes, it was here and I am penning this “au revoir” for the next several weeks to everything else. My thoughts turn to the strivings of athletic souls and stalwart warriors of the field , team against team, nation against nation, method against method, player against player, all football, all the time, thank you FIFA!   [Read more…] 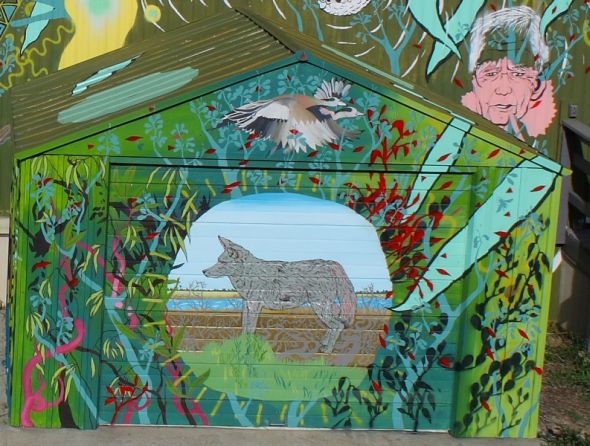 Update Given on Release of 7 Clapper Rails Last Year

The Kendall-Frost UCSD Marsh research facility at the corner of Mission Bay was host to a Marshian Art encounter of the first kind, Saturday evening, April 12, Marshian Day.

Inaugurating her mural, Celeste Byers, UCSD student and art muralist, and friends and supporters of The Marsh, joined in art and music to celebrate. Some 40 people attended and enjoyed the musical event. The photos document the completed mural on Saturday and Celeste Byers, after she signed the mural on Monday.
[Read more…] 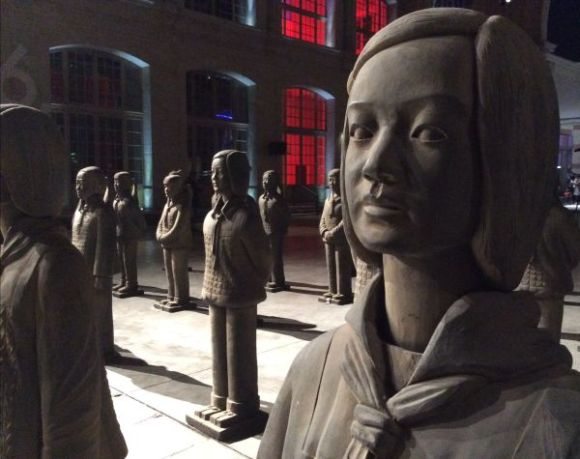 I love Paris, the city where people will stand attentively in line for hours to view an art exposition. Galleries, book stores and theaters are always packed. In France, food is art, clothing is art, life is art, and art is in their hearts from the beginning of recorded time– think of the beautiful Lascaux prehistoric cave paintings.

French children are taught art appreciation from day one and it reflects in the architecture and design and lifestyle all around the country. Visual art. The French invented photography and cinema to further the reach of art for the modern world. They are not afraid to expand the boundaries of acceptability, always challenging our perspective of the world, from Impressionism to Dadaism.

The 2014 Spring Equinox heralds the arrival of one of their own, Prune Nourry, young woman sculptress and multimedia artist, and her astonishing and powerful army of Terracotta Daughters, come to Paris to change the world. There is one word to describe this art show: Awesome.   [Read more…] 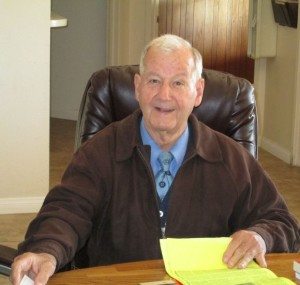 Floyd Morrow is an ex-Marine sergeant who served in combat in the Korean War and later earned a law degree at the University of Texas. He has been a career attorney and longtime citizen activist, both in and out of the San Diego political scene since 1952. He currently leads a philosopher’s round table every Wednesday in the Linda Vista Village community room. The roundtable is a potluck and it’s a potlatch, a native people’s word that means everybody contributes.

“Everybody contributes” would be one of the tenants of Floyd Morrow’s philosophy of life, as well as “positivism,” his personal contribution to a round-the-table query of everybody’ s favorite “isms” which included “prism, hedonism, favoritism, romanticism, mechanism and fiesty-ism. ” We laughed that capitalism, socialism, and communism didn’t make the cut. We shared a moment of silence for the great Pete Seeger, who just died, at 92, a heroic voice of many generations, but only a moment of silence as there were many talkers at this council of scholars.”   [Read more…] 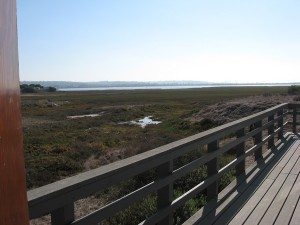 When wildlife enthusiasts, researchers and professors met recently at UCSD Kendall-Frost Mission Bay Reserve, they had one thing on their minds:  the microscopic parasites that inhabit Mission Bay.

The presentation was delivered by Ryan Hechinger, a UC Santa Barbara Marine Science Institute professor, who stated that trematodes, such as the common flatworm, frequently make their way from marsh bird feces into host organisms, like a horned snail, California Achilles fish and fiddler crab, among others. From there, they perform a key role in the regulation of marsh bio-systems.   [Read more…] 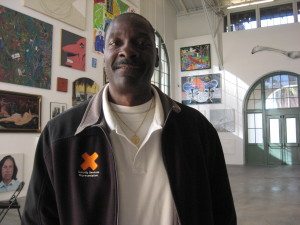 The Guard of Art or the Art of Guard

The Color Field  by Liza Lou  welcomes you into the old train station. Beautiful and inviting, shimmering with thousands of glass beads in perspectives of color geometry, the installation was a collective art event involving museum art volunteers.  I would have liked to walk around the floor piece and enjoy the effect, but was frustrated by the velvet guard rope holding us to a one directional view.  I was delighted when the red trolley went by in the background, suddenly animating the red rectangles, and the field of color transformed from a country into a cityscape.

In The Very Large Array room, movements in the  permanent collection  (less is more?) and some new “old” pieces by San Diegan artist Manny Farber.  His soulful grey reflections, early works, are thoughtful and I would like to see a retrospective of his life works one of these days.  I also very much enjoy our unique border town artists that the museum has been collecting.

Browsing around this part of the exposition leads to some big black doors. You enter a big black room, with large grey canvas panels on the walls–sober graves?– a screen and Ron Hicks, Soul Guard.     [Read more…]

Point Loma Group Looks Into Mess at Nimitz and Rosecrans

What Happened to OB’s Recycling Center Next to Pat’s Liquor?

Meet the New Members of the OB Town Council Board