You are here: Home / Archives for Culture / Arts

This Voice of San Diego video by Adriana Heldiz features Southwestern College professor Perry Vasquez introducing us to highlights of an art project that incorporates the controversial border wall prototypes near the U.S.-Mexico border at Otay Mesa. The project was a collaboration among Vasquez’ students and two other local artists: Jill Holslin and Andrew Sturm.

From the artist Memo Atken’s web page, a description of his series Learning to See informs us that it’s:

an ongoing series of works that use state-of-the-art Machine Learning algorithms as a means of reflecting on ourselves and how we make sense of the world. … Artificial neural networks loosely inspired by our own visual cortex look through surveillance cameras and try to make sense of what they are seeing. Of course they can see only what they already know. Just like us.

“What they know” are “tens of thousands of images scraped from the Google Art Project, containing scans from art collections and museums from all over the world.” That is how mundane objects such as cloths, keys, plugs and hands become transformed into seascapes, flowers and flames.

Perhaps this might be a metaphor for how, occasionally, how difficult it feels to navigate through life. According to the YouTube page:

Suspended from automated grids, more than 400 pendulums are activated to initiate a sweeping 15 part counterpoint of tempi, spacial juxtaposition and gradients of centrifugal force which offers the spectator a constantly morphing labyrinth of significant complexity. The spectators are free to attempt a navigation of this statistically unpredictable environment, but are requested to avoid coming in contact with any of the swinging pendulums. This task, which automatically initiates and alerts the spectators innate predictive faculties, produces a lively choreography of manifold and intricate avoidance strategies.

So, I find myself sitting in an old stuffed chair with worn arm rests, waiting for artist-activist Rocio Hoffmann to paint my portrait (video). As she preps her canvas with a wash of flat red acrylic, Rocio chuckles. “I always start with rojo, red, because this is the name of my gallery, ‘Roho!’”

A small, round-faced woman with a permanent smile and a sharp sense of humor, Hoffmann regularly interviews Baja artists, musicians and dancers while she does their portraits, posting the live feeds to her Facebook page as part of a project called “Conversaciones in ROHO.”  Galeria RoHo, her small, but vibrant studio-school-market space, is located in the artisanal district along Boulevard Popotla, just south of the big hotels and tourist shops of downtown Rosarito.

Today, we’re switching roles. Ever since I met Rocio a few years ago at Festiarte, Tijuana’s exuberant celebration of the arts, I have wanted to interview her because she is a rich source of information about art and culture in Baja Norte.   [Read more…]

Change is coming to Barrio Logan. Some of it good, and some of it bad. But what hasn’t changed is this working class community’s cultural ethos rooted in its history.

Hipster galleries may have opened selling thousand-dollar bongs and tours of the neighborhood, but there are still people and organizations doing solid work trying to keep barrio culture alive. Groups like the Logan Avenue Consortium (LAC).

The LAC promotes Barrio Art Crawl and organizes the bi-weekly summertime La Vuelta Car Cruise that has been a hit among the lowrider set. They also support each member’s endeavors from the weekly Latin Jazz Jam to the Logan Avenue Flea Market to the various events that take place at many of the different cultural spaces along Logan Avenue.   [Read more…] 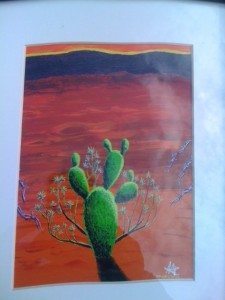 I shakily tried to take a picture with my AT&T 3G cell phone of a cactus painted by Mario Chacon. I acquired it from him a while back in Chicano Park. I had to shade the painting from the glare of a blue sky with the sun shining high and bright and far and wide and finally I got about as good a picture as I was going to get no matter how hard I had tried.

Trite as it may seem my persistence in getting this snapshot was based on Mario telling me that the protrusions reaching out from the cactus spoke to the persistence of the indigenous people.

Being a simple minded person, that colored my thinking as I walked around the park with other people who were there, like me, to celebrate the restoration of the murals. Murals, as I see them, that stem from the long trail of heartaches that have plagued the Americas since the Spanish came by in drive-by style and created a reality wherein folks who had hunted, farmed, and gathered on those rich lands for thousands of years suddenly found themselves in poor standing in the only world they had ever known.   [Read more…]

On January 11, 2017, Chicano Park was recognized as a National Historic Landmark. Native San Diegans and art historians are probably unaware of the hidden history behind San Diego’s Chicano Park murals. These murals appear to be linked to Mexico’s rich history and to legendary muralist David Alfaro Siqueiros, who inspired Gilberto Ramirez, and Guillermo “Yermo” Aranda, artist and chairman of Toltecas en Aztlán – a local Chicana/o artists’ collective group who also initiated the murals at Chicano Park.

San Diego’s Chicana/o murals did not simply materialize; a timeline suggests they appeared through a series of events. “It was turbulent in the late 1960s and early 1970s with protests of the Vietnam War and for human rights” recalls Jim Brega, San Diego State University (SDSU) alumnus.   [Read more…]

It appears that our own Rep. Duncan Hunter has pulled a “Trump-like” distraction in order to manipulate the press away from something else that was embarrassing. It’s a case of Animal House.

Donald Trump has become infamous for making tweets or taking efforts to manipulate the press that are often distractions to more questionable or controversial elements of his campaign and transition. For instance, his press conference on Wednesday, Jan. 11th – the first in 6 months – was a distraction to embarrassing and controversial statements by his cabinet nominees, whose hearings were being held at the very same day in Congress.

And now Hunter has pulled a rabbit out of his Trump hat.

On Friday, Jan. 6, Hunter pulled down an award-winning but controversial painting from a wall in a Capitol hallway. The painting depicts a street clash between police and protesters, most of whom are Black. The painting shows some police officers and protesters as animals.   [Read more…]

I had moments not too long ago when I thought that I just might not be around in 2017 – based on the complete lack of energy I was enduring day after day, with my belly under siege by some bacteria that just didn’t want to leave.

But I’m still here on the scene, happy as a lark, slowly getting back to my routines. Wanting to write something regarding my making it to 2017, I checked a writing prompt website and chose number 17 of the choices, as a symbol for 2017, and it read: “In 400 words create your ideal place.”

That put me in a nice place because the prompt could have been something like “Write a 150 word profile on somebody named ‘Margaret Mallory’” or write about “something wrapped” which would have called on more creativity than I wanted to own. I just wanted to kick the new year off in a nice tone.   [Read more…]

The founder of the World Beat Center in Balboa Park is now embarking on a new venture. In collaboration with other local and international artists, they have opened an art and cultural center, Casa del Tunel, right across the border in Tijuana. Like the World Beat Center, Casa del Tunel will be a place where people of many different cultures can come together to teach, perform, and present traditional forms of art to the world. There will be exhibits and art, dance, and music classes. It will be a binational and multinational collaboration. Enrique Chiu, a well-known local artist, is the art director and Wilner Metelus, a Haitian from Mexico City, will collaborate with them.

Casa del Tunel is also a place for Makeda to engage in her philanthropic side as she envisions it as a place to help support the Haitian and African refugees who have been arriving in Tijuana. She hopes to provide jobs, guidance, and promote their art.

Some of the murals have been in San Diego and some have been abroad. PangeaSeed mural projects aim to raise awareness about different issues effecting our oceans. As an artist for PangeaSeed she has traveled to Sri Lanka, Vietnam, New Zealand, and several cities in Mexico.   [Read more…]