;
You are here: Home / Archives for Culture / Music

Has it already been twenty years since a band of guerrilla word slingers thought to share poetry with taco shop patrons? Apparently so, as the Taco Shop Poets are back in poetic motion for a gig at The Front in San Ysidro.

Founding Taco Shop Poets member Adolfo Guzman Lopez told me “it’s been 20 years since the idea for taco shop poetry was put in motion. We’re presenting the group’s 2011 book Sugarskull Sueños at the Tijuana book fair and what better place to reflect on our personal journeys as Mexican Americans, Chicanos, Latinos, cuarentones, border vatos, and fathers than a homegrown community space in San Ysidro.”

Originally started as a large, loose knit group of mostly Chicano and Latino raconteurs the Taco Shop Poets almost singlehandedly helped recreate the California spoken word poetry scene. They eventually whittled themselves down into a tight collective of border bards that have toured the nation and beyond. Their influence on the Chicano poetry world can still be felt today even though they’ve been relatively dormant the past few years.   [Read more…] 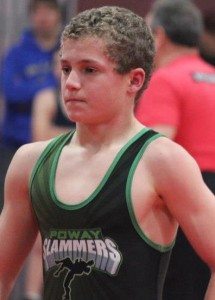 I hope that some of you remember the story about my grandson Colin and his goal to win a medal in the Nationals in wrestling and go on to Stanford on a wrestling scholarship.  Colin, you might remember, is 14 and had just placed 3rd in his division at the nationals held in Las Vegas a few weeks back.  Colin is an excellent athlete – excels in all sports he likes.

There is one other “sport” that he excels in that I want to tell you about.

When he entered the 6th grade he was told that “Ballroom Dancing” was a requirement. He was so upset that he cried and wanted to switch schools. He did not want to take the class, but since it was mandated, he had no choice.   [Read more…] 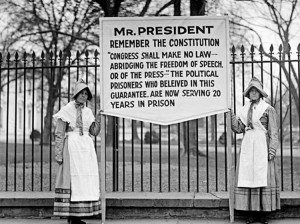 Century Old Espionage Law Being Used to Reign in the Press

For as long as there’s been a central government in the United States, it’s been attempting to reign in the press.

The 1798 Alien and Sedition Act was an effort by the governing Federalist Party to criminalize criticism of Congress and the President.  President Abraham Lincoln signed numerous executive orders which made it both illegal and punishable by death to hold “correspondence with” or give “intelligence to the enemy, either directly or indirectly”.

Twentieth century presidents resorted to covert surveillance and even blackmail when they couldn’t find a handy law to keep the fourth estate in check. 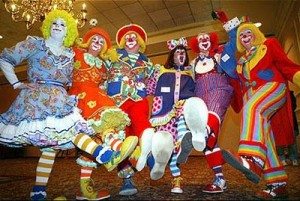 Well here it is folks. This is the day we’ve all been waiting for. Congressman Darrell Issa’s going to blow the lid off the foreign policy scandal that’s been festering for over six months now.

Representative Steve King of Iowa, perhaps best known for his comparison of immigrants and dogs, says:

“I believe that it’s a lot bigger than Watergate, and if you link Watergate and Iran-Contra together and multiply it times maybe 10 or so, you’re going to get in the zone where Benghazi is,”   [Read more…] 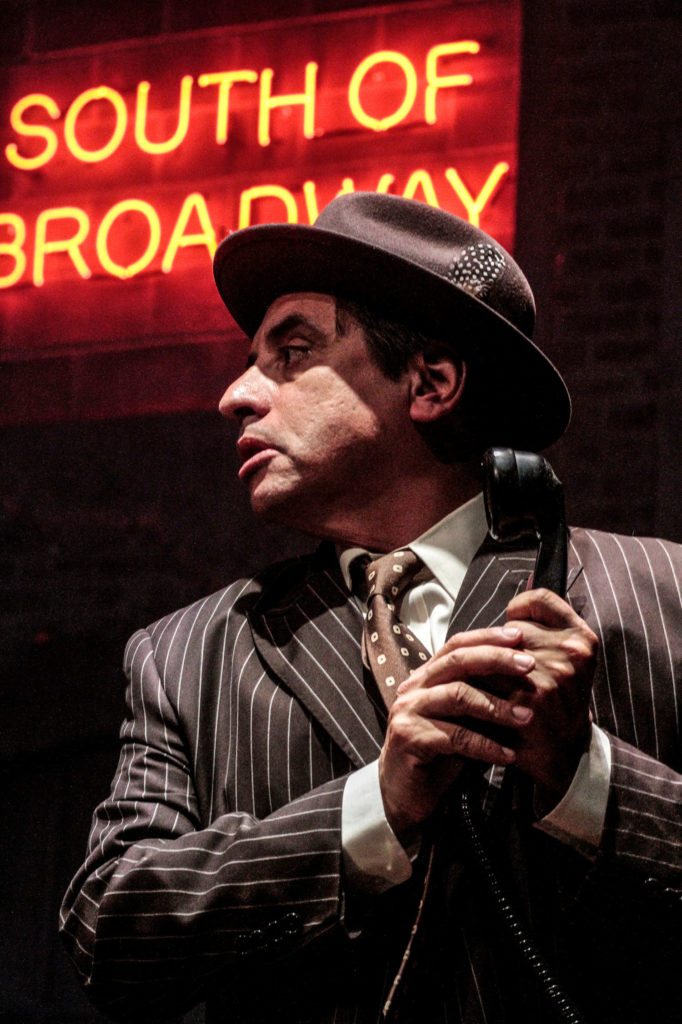 San Diego-born playwright Richard Montoya has been on a prolific hot streak for the past several years. His expert mix of weight and whimsy have made him a favorite of local audiences, and his latest play, Federal Jazz Project, is yet another winner.  A collaboration with local jazz master Gilbert Castellanos, Federal Jazz Project delivers a verbal and musical tour de force that digs into the dark underbelly of World War II-era San Diego and provides a fascinating history tour of America’s Finest City.

Fans of local lore and lovers of great jazz should rush out to see Federal Jazz Project before it concludes its World Premiere run at the San Diego Repertory Theatre this Sunday at 2pm.

Federal Jazz Project shines on many levels and features some brilliant writing by Montoya.  Stellar live music by a Castellanos-led jazz quintet and strong performances by a capable cast round out the story of Kidd (Joe Hernandez-Kolski), an idealistic impresario, whose hopes of launching the careers of two singing and dancing sisters named San Diego and Tijuana, played Lorraine Castellanos and Claudia Gomez, are thwarted by the guardians of San Diego’s military-industrial complex.   [Read more…]

Cinco de Mayo commemorates El Día de la Batalla de Puebla (The Day of the Battle of Puebla) where in 1862 a ragtag Mexican army lead by General Ignacio Zaragoza defeated a much superior and better equipped force of the French army. Cinco de Mayo is not Mexican Independence Day. It’s not even a significant holiday in Mexico except in the state of Puebla where the battle took place.

I’ve known Chunky Sanchez of Los Alacranes for at least fifteen years and worked with him on numerous occasions including organizing a fundraiser in 2007, called Musicians Helping Their Own, for local Latin jazz trumpet player Bill Caballero who was stricken with cancer and on a project in 2009 called Deportation Nation: Musical Migrations that featured a concert with Los Alacranes, Quino (of Big Mountain fame) and Son Sin Fronteras where the three groups at the end of the night jammed together on the Woody Guthrie classic Deportee (Plane Wreck at Los Gatos).

As a matter of fact the first time Los Lobos played in San Diego was at the Centro Cultural de la Raza at the invitation of Chunky. And usually when the baddest band out of East LA plays a show in San Diego they give a shout out to Chunky y Los Alacranes. These two groups started out during the same era and continue to share a musical brotherhood. 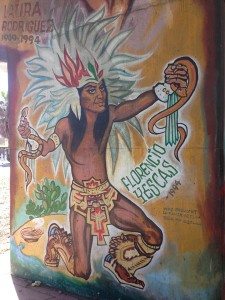 Drums pounding like a heart beat at the center of Chicano Park, Aztec dancers adorned with feathers and gourd rattles pound out their blessings for another year’s celebration with their feet. It has been this way since the beginning. The Aztec prayers are honored in the murals of the park by the founding artists who became danzantes in their own right, a resurgence of centuries old traditions born again in La Tierra Mia.

I was 13 years old when I first donned feathers on my head and rattles on my feet for the 19th Annual Chicano Park Day celebration. I nervously stood in line with other dancers, listening to stories from the elders about The Toltecas En Aztlán and the founding of Chicano Park, awaiting the sound of conch shells to tell me it was time to begin the procession. The smell of smoke and copal incense helped me to focus my thoughts and prayers and as I looked out at the cheering crowd, I raised my head high with a sense of pride, humility and honor.   [Read more…] 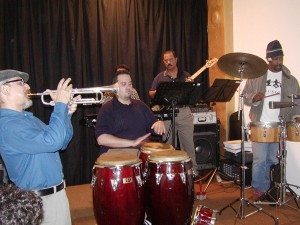 “At my jam everyone’s equal; nobody’s better than anybody else.”

What Bill Caballero is really saying is that the floor at Voz Alta Project in Barrio Logan is open to the worst players in San Diego, even if only for a moment. And, so long as they learn from their failures they’ll almost certainly win a few more choruses with the house band if they have the nerve to try and catch Caballero’s eye the next time they come to the jam.

No more than 1000 square feet of space within the building at 1754 National Ave., Voz Alta is where some of San Diego’s best musicians might drop by to sit in with the house band Caballero leads every Thursday night. It costs nothing to get in (tips are appreciated), though musicians often have to leave their pride behind at the doorway. The house band (which sometimes includes local music journeymen Kiko Cornejo Sr. and his son Kiko Jr. on timbales/percussion, Andy Esparza on bass, Ignacio Arango on guitar, Paul Lopez on congas/percussion and others) minus leader Caballero get a part of the tip jar; the hackers and nobodies must await their turn in the appropriate agony of anticipation.   [Read more…] 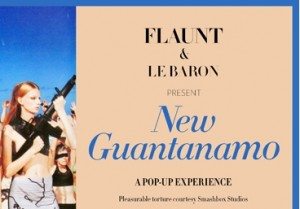 For those of you who are terminally uncool, the next two weekends are the time of year when tens of thousands of (mostly) otherwise sane people take to the desert for a time out to enjoy the Coachella Valley Music and Arts Annual Festival.

The Indio, California shindig features music from a variety of genres playing from stages located throughout the Empire Polo Club. People have been known to get stoned and occasionally naked, but the real reason to go is to say you’ve been there, done that. It’s cooler than a tramp stamp.

Lots of auxiliary (not officially sanctioned) events occur because the crowd is large and mostly affluent. One of them caught my attention yesterday, and it really rattled my cage. Some fashionistas have decided that it would be appro to throw a Gitmo themed party, I guess because human rights violations and torture are such ‘groovy’ ideas. This is stupider than stupid.   [Read more…] 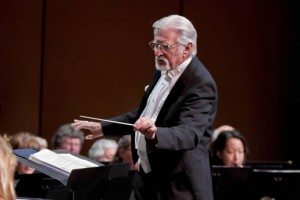 Community Bands have been an enduring part of Americana. The San Diego Concert Band proudly continues that tradition. Based in East County, we serve San Diego and neighboring counties, and have acted as cultural ambassadors in performances overseas.

Originally founded as the La Mesa Community Band in 1989 by Charles D. Yates and Warren Toms, the San Diego Concert Band continues to provide the best in concert band music to audiences in San Diego and abroad. Celebrating almost two and a half decades of entertaining San Diego residents, this band has an exciting schedule of concerts planned this year.

Over the years, the annual spring and Winter concerts have been performed throughout the county, including East County Performing Arts Center, the beautiful setting of Point Loma Nazarene University and the Ray and Joan Kroc Community Center.   [Read more…] 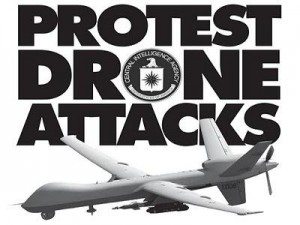 For many months now San Diego Veterans for Peace have been staging a weekly vigil outside the General Atomics plant in southeasternPoway. It’s a difficult place to protest, parking is very limited, the elements can be harsh and some locals have been hostile.

None-the-less, the group shows up every Thursday afternoon. They stand by the side of the road holding signs reminding passers-by that drones are indeed weapons of war and not just some abstract toy the military plays with. The Vets for Peace say they’ve been surprised at how supportive people who working in the nearby plant have been.

It’s certainly not the flashiest demonstration; there are no celebrities, no acts of civil disobedience and news coverage is a rarity. But, like the drip-drip-drip of a leaking roof, the cumulative effect of the Vets for Peace presence is starting to be felt.

Today (3:30pm, Scripps Poway Parkway and General Atomics Way) there will be a TV crew from PBS, getting advance footage for next weeks’ national-wide April Anti-Drone Days of Action.

Next Wednesday (April 3) a nation-wide coalition of anti-war and privacy groups will kick off a month long series of protests with a rally in New York, followed by three days of protest outside the facilities of companies that make drones, including the local General Atomics facility, which makes Predator and Reaper drones.   [Read more…]