You are here: Home / Archives for Mt. Soledad 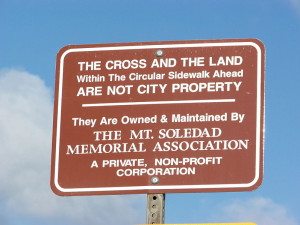 Now that Memorial Day 2013  is over, let’s record how the red/blue politics of the day trumped history and tradition and every lemming newspaper in this Navy town went along.

Apparently the Los Angeles Times, U-T San Diego, San Diego Reader and La Jolla Light forgot that San Diego is home to Fort Rosecrans National Cemetery, final resting place for more than 115,000 servicemembers and their families from all branches of the armed forces and site of the largest Memorial Day commemoration in the city.

Each of those newspapers carried stories with photographs, some prominent on Page One, of ceremonies in La Jolla at the “Mt. Soledad Veterans’ Memorial” underneath the controversial hilltop Christian cross. Not one journal mentioned that the Supreme Court has upheld the U.S. 9th District Court finding that this towering cross represents an illegal and unconstitutional expression of religion in a public place.

And not one mentioned that there is no consecrated ground there.
[Read more…]

Peninsula Community Planning Board Struggles With Its Own Implosion – Thurs., Feb.20

Is ‘Ranked Choice Voting’ in the Future for California?