You are here: Home / Archives for Ocean Beach

Two incredulous tales about the agencies entrusted to look out for the public good opting for short-sighted policies grabbed my attention this morning. Apparently climate change is a mere bureaucratic hurdle and the drought is soon to be forgotten. I guess we just gotta have faith, baby.

Our regional transportation planners are set to approve a proposal no better than the one already rejected by the courts for failing to meet state-mandated greenhouse gas reduction goals, according to the group that took them to court in the first place.

Ten local water agencies are, according to a story in Voice of San Diego, questioning state regulators about the need to continue restrictions on water use. They’re banking on a return to normalcy with the advent of El Nino conditions this winter, and are apparently ignorant of long term trends due to climate change.   [Read more…]

For years, Lifeguards have expressed the need for increased staffing at several locations.  The need for staffing at Ocean Beach and Sunset Cliffs is high on the list.

They used to be attended mainly by locals but the internet, increased tourism and vacation rentals have changed that.   [Read more…]

While there is near-universal agreement about the sorry state of San Diego’s infrastructure, building a consensus on the ways and means of getting the job done has proved to be challenging.

The Mayor’s office has been very public about wanting a deal to build a new football stadium, but conversations about how to keep the roads to that stadium in shape and the pipes carrying all the recycled beer away have been muted.

And then there’s the Convention Center, where monies that could have been used for keeping the building in shape were gambled on an improbable expansion plan.   [Read more…]

Animal rights activists from throughout Southern California will gather in San Diego this weekend in a kick-off for a world-wide campaign called “Empty the Tanks” with demonstrations against SeaWorld.

The main demonstration is on Saturday, June 6th outside SeaWorld from 10am to 1pm, at the intersection of SeaWorld Drive and SeaWorld Way. The goal is to advocate for marine mammals held captive worldwide for entertainment and profit.   [Read more…]

For the remainder of June, local beach artist Micaela Porte is displaying her recent works – Birds of Paradise – at Te Mana Cafe in Ocean Beach, over at 4956 Voltaire Street.

The show has been running since the end of April. They’re open daily until 6 pm, closed Wednesdays.

Micaela told us that acrylic paint, some old canvases and bird of paradise heads from one of her neighbor’s yard inspired a binge of colorful paintings of bird of paradise flowers – which all harmonize with the aloha theme at the Te Mana garden cafe.   [Read more…] 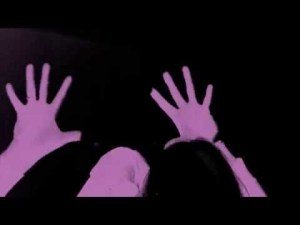 Complaints About Homeless Have Echoes

The solid citizenry of Ocean Beach are aroused. For some time now, there has been a virtual state of war existing between businessmen and merchants, on the one hand, and homeless on the other. The growing homeless community in OB has been met with growing alarm on the part of the established citizenry.

Those with Establishment interests want to drive the homeless out of OB since they view them as a treat to their businesses and are offended by the mores and folkways of the homeless youth culture. Homeless contribute very little economically to established businesses and tend to scare away more conventional people who would have patronized these businesses. Homeless people have been refused service at several places of business and in turn have taken revenge through acts of vandalism and theft. Because of this, insurance companies have raised the rates charged to OB businessmen.

Recently, there have been several public acts of sexual intercourse including screwing on the front lawn (an all-time first in San Diego according to some sources) which established citizens feel set a bad example for their own families.   [Read more…] 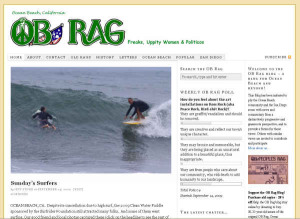 This is the 7th birthday for the online OB Rag. During the October fires of 2007, Patty Jones and I launched the OB Rag out of our small cottage on Long Branch Avenue. Many of our early articles critiqued both the mainstream media’s coverage of the fires plus how the fires were being fought.

Seven years later, much has changed, of course. We’ve gone from a little-known blog to one of the best community-based websites in Southern California, which is constantly referred to by the local mainstream media, police, and local politicians, and occasionally we make the national news. Other notes of interest: quotes from the OB Rag made it up on the ceiling of OB’s newest public “comfort station” on the beach – whose design won an Orchid Award in 2012.   [Read more…] 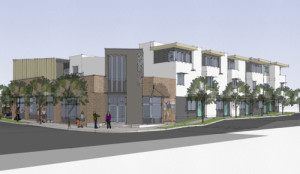 For the last half century, cities have attempted to repair the damage to their urban cores from migration to suburbs and exurbs. Redevelopment has evolved into smart growth, transit oriented development, and complete streets. In the last 15 years or so, the urban renewal efforts have had a receptive audience as people, tired of the car oriented lifestyle of the suburbs, are returning to urban cores and older urban neighborhoods. However, while cities get the big picture, too often in my 25 years as a land use attorney, I have seen the same mistakes repeated.

1) Failing to Understand How to Provide for Pedestrian and Other Active Transit:

Too often, cities and towns seem to think that all pedestrians need are sidewalks to walk on and greenery to look at. The same goes for bikes and bikelanes. It goes without saying that pedestrians and bikes work differently than cars, each with their own advantages and disadvantages.   [Read more…]

Harris: “We can’t keep giving away our assets to big business.”

Just got off the phone with Councilman Ed Harris – he represents OB, Mission Beach and the rest of District 2, of course.

He had a lot to say about the Belmont Park lease that the City Council just rejected on Monday. He knew that we’d been covering the issue. Today, the U-T ran an article on the rejection, tacking in favor of the current managers, it seemed. Harris wanted to set the record straight.

Harris, you see, led a Council majority yesterday in rejecting the proposed new lease for Pacifica Enterprises because the cut the City is getting is not fair. All the Democrats followed his lead (Emerald was out) and are having the issue return to the Council in 60 days. The Republicans all voted to renew the current lease.

“We have to take in the big picture,” Harris told me. “We can’t keep giving away our assets to big business,” he said.

The deal that the City of San Diego has in the current lease for Belmont Park is not fair, he said in so many words.

Tuesday, July 22 was a remarkable day for San Diego. Starting with an early morning prayer vigil at San Diego City Hall in support of a higher minimum wage and ending with hundreds of Escondido residents calling for a humanitarian response to the border refugee crisis, people stood up for causes they believed in.

At noontime a broad spectrum of supporters of organized labor rallied in Mission Valley, vowing to support workers for Food-4-Less should they go on strike. And in the afternoon environmental activists testified before the city council, urging Mayor Kevin Faulconer to move ahead with a review process needed to consider an ordinance curtailing the use of plastic shopping bags.

People chose to make a stand on issues that were important to them. They faced off against institutional and political hostility, along with a corporate media all-too-willing to give a platform to those willing to spew ridicule (the UT’s Greenhut) and venomous language (Escondido’s nativists). They stood up and said “we’re not going to take it any more” (UFCW’s Kasparian). They testified that now is the time to protect the environment (representatives of Coastkeeper, Surfrider and the Sierra Club). 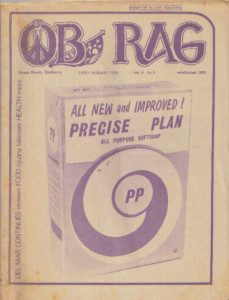 Staff: This is the second part of a 2-part series published this week. The series is loosely based on a talk by Frank Gormlie at the February 21, 2013 OB Historical Society monthly meeting. Here is Part 1

The Twists and Turns of the Community Plan for OB

Last we left off was the Spring of 1972, when the City Planning Department canceled or postponed all its meetings or workshops on the Pen. Inc sponsored Precise Plan. This was due to the establishment of a substantial opposition to the plan, which was in the form of a damning survey of resident attitudes toward development, high-rise and density increases, and a petition calling for a building moratorium signed by thousands.

So, in the spring and summer months of 1972, the crisis was over – at least temporarily as Ocean Beach had awoken, and its residents had successfully halted the threatened onslaught of massive development.

There appeared to be a lull … for about 6 or 7 months.

The lull didn’t last. In early 1973, the city began making noises about getting the same old Precise Plan before the San Diego Planning Commission for its approval.

This once again caused activists to mobilize, and about 20 people – from OB Ecology Action, the OB Rag and Save OB Committee – met in mid February to plan an organizing meeting. Its goal: to once and for all put together a planning committee for Ocean Beach.   [Read more…] 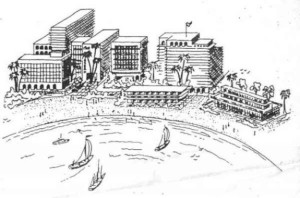 It is a great and wonderful story about how a small village rebelled against a top-down blueprint for OB, a blueprint that would have benefited the elite who drew it up. It’s a story how the small village blocked a plan that would have literally paved the way for the community to be redeveloped into a San Diego version of Miami Beach.

It’s the story of  how Ocean Beach saved itself, and how the small, seaside community led the way within the great city of San Diego and in the great state of California in actually forming the very first neighborhood planning committee that was democratically-elected.

And finally, it is a story about how the successes of grassroots activists in Ocean Beach revolutionized urban planning for the citizens and residents of not only Ocean Beach, but throughout San Diego and the state.   [Read more…]