You are here: Home / Archives for Ramona

By W. Scott Koenig / A Gringo In Mexico

RAMONA, CALIFORNIA – When I heard that Mario Medina was taking over the kitchen at American steakhouse The Main Course Restaurant in Ramona, I couldn’t make the connection. When I met chef Mario – originally from Mexico City – he was executive chef at Finch’s in La Jolla, where he prepared elegant plates of California cuisine.

Who would have guessed that the chef would be slinging large slabs of dry-aged meat in rural east county San Diego just two years later?

Chef Mario explained it to me during a recent visit to Ramona to sample The Main Course’s menu. “One of the reasons I decided to take the position here, is the availability of local, sustainable ingredients from the farms and ranches in Ramona.”   [Read more…]

The County Board of Supervisors met Wednesday to vote on staff recommendations to extend a moratorium against new medical marijuana activity in San Diego County. The 45 day moratorium was put in place on March 16 and was largely a knee-jerk reaction to a group of community members from Julian and Ramona. At the March meeting the Board instructed staff to come back with options including a ban on medical cannabis; enhanced enforcement and more zoning restrictions among other things. Instead, staff returned with a request for more time which was ultimately granted.   [Read more…] 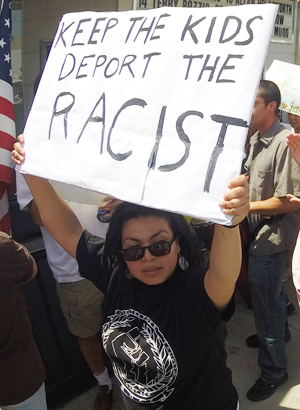 About four years ago when Joe Arpaio visited San Diego, his reputation and stance on immigration policy earned him a booing from protesters and residents in the county. In short, San Diego did not receive him with open arms.

Nearly a month after protesters blocked buses in Murrieta, approximately 10:30 on Saturday morning, July 26th, in Ramona, our carpool passed the Joe Arpaio meet up location of the Ramona Mainstage, and out of the crowd I spotted a face; a face that resembled a skin tone similar to mine.

The man wearing the face held up a sign that read, “We Support You Joe”. I instantly thought that the signage must have been referring to him and his family, because I know he being the only seemingly brown face lined up in support of Sheriff Joe, he could not be referring to the Latino community, and especially not the Chicano community in the surrounding areas.   [Read more…] 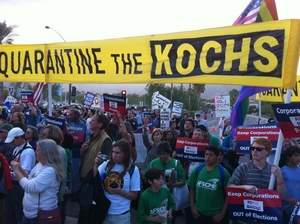 This weekend (Apr 28-29) hundreds of business executives and wealthy conservative donors will descend upon the Coachella Valley, hoping to forge a strategy to turn last fall’s drubbing of conservative candidates into future victories. I imagine the crowd will be considerably different from what locals have seen over the past two weeks.

Since 2003 billionaire industrialists David and Charles Koch have been hosting regular retreats at luxury resorts seeking to focus the resources and energy of wealthy and politically ambitious conservatives in the US.

It might be the season of hope that is guiding the decision makers at RUSD because the employees, Administration and School Board seem collectively unified in the idea that the only way out of the looming fiscal mess is to pass a school bond that has failed 5 times previously. It’s good that they are unified because they need to resolve some pressing issues very soon, or the school district will be in the red as soon as 2013. It’s not good that they are unified because they seem unable or unwilling to see what is really happening, a slow degradation of our school system to pay off a ballooning debt.

There are a couple of constants that I consider when pondering the future of our school system. 1. No amount of employee sacrifices can fix the long-term debt wave that is engulfing the school district. 2. The district cannot default on the loan made by the previous school board, and the bondholders will get their money. 3. The district can either pass a school bond that has failed 5 times in a row, or surrender the school district to the state.   [Read more…] 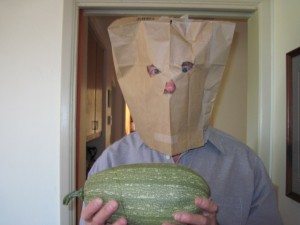 Like a shot heard round the world, what was considered beyond the limits of civility was breached while we were away. When we saw what had been left on our doorstep in Ramona, my wife ran away screaming and I was taken aback to witness what depths of decency had been abandoned. I shudder to think what may become of society in Ramona as a result of this dastardly act, because this means war.

Someone left an extremely large zucchini on our doorstep. Zucchinis at this time of year are frightening because we are at wits end with what to do with them.   [Read more…]