This is for he, she
You, me
Everybody in this neighborhood
We 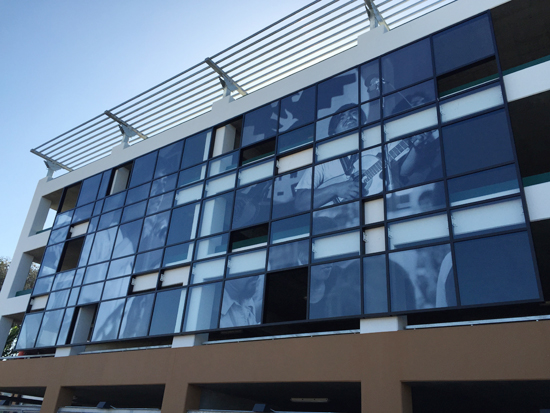 This week photo murals depicting late labor leader Cesar Chavez have gone up on a new parking structure in Barrio Logan. The structure, located on the corner of Cesar Chavez Parkway and National Avenue, will be fitted with eight different photo murals “reflecting and honoring the life and work” of the United Farmworker co-founder.

Carlos LeGerrette, activist, photographer and originator of the Cesar Chavez Service Clubs, was instrumental in making the photo murals a reality through his historic and extensive photo collection of Cesar Chavez and the UFW.

“We worked with LeGerrette and other community members through a series of collaborative meetings to determine which images of Cesar Chavez should be displayed on the facility,” said Rudy Kastelic, Interim President at San Diego Continuing Education. “We have been serving the Barrio Logan community since the 70s and we’ve had ‘good neighbor’ relationships with Barrio Station, Cesar Chavez Service Clubs and other organizations in the community that we wanted to include in our building process.”   [Read more…]

April is National Poetry Month and us litera-locos y locas at San Diego Free Press are celebrating by, once again, posting poetry and poetry/spoken word videos throughout the month.

I have been tasked with curating this internet exhibition of verse. I don’t consider myself a poet (though I confess I’ve written a few poems) but I do know many through my days of publishing while co-owner of Calaca Press.

Though not schooled in the literary arts literature has always been near and dear to my heart. Being able to artistically sling words together is a true craft that must be honed like any other.   [Read more…]

With all of the talk around town about the Chargers and their demands for a new stadium something has been overlooked: Barrio Logan. If the city acquiesces to the demands of the Chargers (which they have done in the past) and gives them a brand new stadium in the East Village what happens to the community that sits just south of there?

The impact on Barrio Logan residents would be tremendous… in a bad way.

For the most part the residents of Barrio Logan are renters. A new stadium so close to a community of renters would raise property values up to the point where they could no longer rent in the community they love. Thus, forcing many longtime community members out and changing the socio-economic and cultural character of Barrio Logan.   [Read more…] 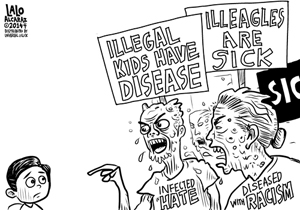 Once again restaurant owner Mark Lane, the accidental activist, has stepped forward to help not only refugee children but the children of deported American veterans and children of deported DREAMer moms as well. He will be hosting a toy drive and presentation on Friday night at Poppa’s Fresh Fish featuring former Lemon Grove native and syndicated cartoonist Lalo Alcaraz.

Lalo, the creator of La Cucaracha and Pocho.com and writer and consulting producer for the soon-to-be aired Fox cartoon Bordertown will be giving a thirty minute presentation about his cartoons and art and will follow with a book, poster and 2015 Cartoon Calendar signing.

“We chose to work with Lalo Alcaraz, as he has been a tireless fighter for immigrant rights, using his forum as a syndicated cartoonist to fight. He is a hometown hero in my opinion,” wrote fellow Lemon Grove native and resident Mark Lane.   [Read more…] 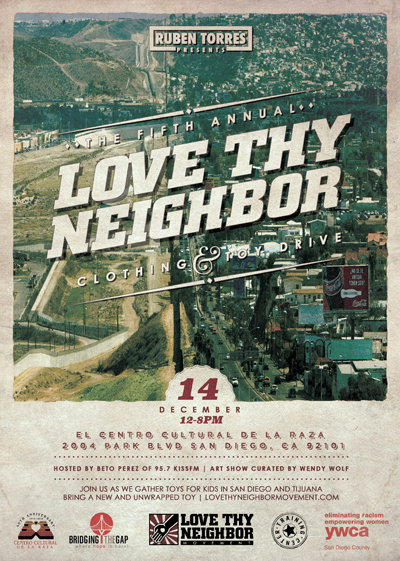 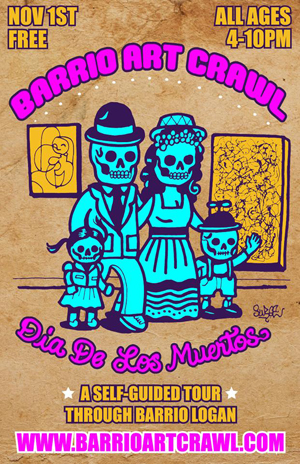 With his back against the wall, and a community within his district upset with the continued siting of the winter shelter in their neighborhood and the negative impact it brings, Councilmember David Alvarez stepped up and brokered a compromise.

Though the shelter will return this coming winter the City Council voted unanimously (with Councilmember Marti Emerald absent due to health reasons) with Mr. Alvarez’s motion to not have the location at Newton Avenue and 16th Street in Barrio Logan considered by the Housing Commission in 2016.

It’s rare that Republican City Councilmembers vote on anything positive for Barrio Logan. This compromise is one of the few times in recent memory and a welcome sight. It also shows Mr. Alvarez’s ability to get deals done when needed.   [Read more…] 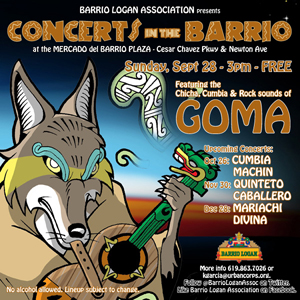 Barrio Logan is becoming well known for its thriving, grassroots arts scene. This weekend’s activities are proof of that. From Friday through Sunday numerous cultural events will take place within San Diego’s most historic Chicano community.

The events include the 2nd annual Barrio Art Jam at La Bodega on Friday night, Barrio Art Crawl throughout the Barrio Arts District on Saturday afternoon/evening and the Barrio Logan Association’s Concerts in the Barrio at the Mercado del Barrio plaza on Sunday afternoon.   [Read more…] 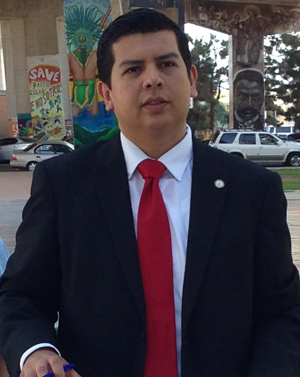 In Part I the Councilman discussed the minimum wage, upgrades to Chicano Park, Barrio Art Crawl and creating a place to be on Sunday afternoons in Barrio Logan. In Part II he talks about the Emergency Winter Homeless Shelter, bringing an outpatient mental health facility to Logan, big rigs rumbling though Barrio Logan streets, the final leg of the Bayshore Bikeway, and the Barrio Logan gateway sign.

Brent E. Beltrán: The Winter Homeless Shelter is probably going to be sited here again. How does this community fight that? Other districts don’t want it. It’s been here for so many years now. I’m under the impression that it’s always going to be here. My issue is how do we mitigate the impact of having hundreds of people not just living in the shelter but also living on the streets and in the park. How do we get more resources to come in without having to use Barrio Logan Association funds to clean up?   [Read more…]

In this first of two parts the Councilman discusses the minimum wage, upgrades to Chicano Park, Barrio Art Crawl and creating a place to be on Sunday afternoons in Barrio Logan

I woke up on Monday morning and, as I usually do, checked my email first (then Twitter and Facebook). In my inbox was an email from the Raise Up San Diego campaign stating that they were holding a press conference with David Alvarez at Chicano Park at 10am.

Feeling compelled to attend a presser across the street from where I lived I went about my morning business of getting my son Dino ready for preschool and walked him the two blocks to Perkins Elementary.

With him starting school I’ve been on a walking kick to get rid of some of the “sympathy” weight I gained in solidarity with my wife during the pregnancy. From 9am to about 10am I’d walk from Barrio Logan down Harbor Dr. — dodging traffic since there are no sidewalks — to the Convention Center stairs and then back to my barrio.

Knowing that I’d be dripping sweat, from not only walking but from the muggy weather we’ve been having, I thought I’d hang in the background of the presser once I arrived to Chicano Park. That was not to be the case.   [Read more…]