The Chicano Park Museum and Cultural Center is coming to Barrio Logan next door to Chicano Park. The City and museum have yet to sign a lease over the property that for years held the Cesar Chavez Continuing Education Center. But it will happen.

Activists involved with the Chicano Park Steering Committee created the nonprofit Chicano Park Museum and Cultural Center. Board members include…

Chicano Park co-founder and lifelong CPSC member Josie Talamantez, who wrote the proposal to place Chicano Park’s Monumental Murals on the National Registry of Historic Sites and recently presented in Washington, DC before the National Landmark review committee (her proposal passed unanimously), is leading the charge to make the museum happen.   [Read more…]

On Friday, July 15 from 11:30am to 1pm the San Diego Chargers will be bringing their pro-East Village stadium campaign to Barrio Logan for the Family Health Center’s Spirit of the Barrio luncheon. B.A.STA!, Barrios Against STAdiums!, will be outside the event holding a silent protest with signs and banners opposing the Chargers efforts to build a stadium one block from Barrio Logan. A press conference will also take place.   [Read more…]

It took almost three years to complete but Chicano Park finally received the recreational improvements that I wrote were coming back in January of 2014. New improvements to this local treasure and nationally registered historic site include a skate lane, exercise stations, an added handball court, new children’s playgrounds, a drought friendly water fountain, and other editions.

On Thursday, November 5 at 3pm there will be a ribbon cutting ceremony featuring local dignitaries such as Councilman David Alvarez, Assemblywoman Lorena Gonzalez, Urban Corps of San Diego CEO Robert Chavez, Tommie Camarillo from the Chicano Park Steering Committee as well as many others who were instrumental in making Chicano Park what it is and the improvements possible.   [Read more…]

Comic-Con is here and, as usual, Barrio Logan has been left out of the official fun stuff. But we don’t fret around here. We do things for ourselves, like Chicano-Con and MARVEL vs DC.

But there is also something else taking place in San Diego’s favorite barrio. On Sunday, July 12 from 12:30pm to 1:45pm there will be a panel discussion at the Logan Heights Library called Women of Color in Comics: Race, Gender & The Comic Book Medium.

The panel is free to all and will be moderated by Lockett Down Productions Publications owner Regine Sawyer. There will also be some free giveaways to audience members from the panelists as well as free superhero comics for kids and parents donated by an anonymous friend of mine.   [Read more…]

Barrio Logan, located less than a mile from the convention center, has been mostly left out of Comic-Con over the years. Comic-Con International recently bought a building at 16th and National in Barrio Logan. Yet no official events are scheduled to take place here.

There’s not even a shuttle bus stop yet there will be Comic-Con buses running every twenty minutes down Cesar Chavez Parkway heading towards the freeway. And there will also be countless attendees using this community as a parking lot to escape the outrageous parking fees.

Yet no official activities take place here. No outreach has been done to incorporate a low income, mostly  Latino community impacted every year by Comic-Con. And that is unfortunate.   [Read more…]

Local Poet Returns to the Mic at Poetic Libations II

Thursday night marks the return of Ken10 as a featured poet on the San Diego literary arts scene. Ken10, also known as Kenton Hundley, took a short break from performing his poetry regularly at local venues.

In the 2000’s Ken10 was a constant fixture at the various poetic happenings that took place during that period. He was a member of Goatsong Conspiracy and the award winning group, Los Able Minded Poets, and performed his socially conscious, hip hop and jazz influenced verse throughout San Diego.   [Read more…]

On Tuesday morning, surrounded by her partner, family and supporters in City Heights, community activist Georgette Gómez declared her intent to run for City Council in District 9. A resident of City Heights’ Azalea Park, Ms. Gómez wants to be a champion for all D9 residents.

“I believe that we need elected officials who not only listen to our communities when they organize but someone who can actively and proactively serve us,” says Gómez.   [Read more…]

For the first time in the history of the universe two of the greatest things (of the many) that Barrio Logan offers is happening on the same day. From 10am until 5pm you can enjoy the sights and sounds that is the annual Chicano Park Day celebration then from 5pm until 9pm you can crawl the streets of La Logan in search of artistic enjoyment at the various art venues within this creative community.

Chicano Park was founded on April 22, 1970 as a land takeover by community members after they found out that a California Highway Patrol substation was going to be built on the site instead of a park. In 2013, due to the beautiful murals that grace the pillars of the San Diego-Coronado Bridge, Chicano Park was placed on the National Register of Historic Places.   [Read more…]

For Part I of the interview please visit.

In this second installment of my two part interview with playwright Paul S. Flores he discusses the founding of Los Delicados, what poetry means to him, his novel Along The Border Lies, what attracted him to theatre, his play PLACAS: The Most Dangerous Tattoo, the casting of Culture Clash’s Ric Salinas in the lead role, the outreach for the play, him being named a Doris Duke Artist, and what advice he’d give to fledgling minority writers.   [Read more…] 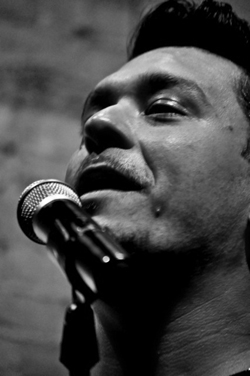 Writer Paul S. Flores grew up in Chula Vista and attended UCSD. He moved to San Francisco to pursue his Master of Fine Arts in Creative Writing. While there he immersed himself in the Bay Area arts/activist scene, helped found Youth Speaks, co-founded the irreverent poetry troupe Los Delicados, wrote an award winning novel, Along The Border Lies, wrote and performed his original plays, had children, and was recently named a Doris Duke Artist. His play PLACAS: The Most Dangerous Tattoo is touring California with a stop in San Diego April 23-25.

I met Paul, along with his Delicado compatriots, at a Floricanto Festival in San Jose in 1999 while publisher of the grassroots literary publishing house Calaca Press. In 2000, Calaca Press produced the spoken word CD anthology, Raza Spoken Here 2, which featured their poem Presente! In 2001 Calaca released their full length CD, Word Descarga. Since then Paul has gone on to do some tremendous literary work.   [Read more…]

Roundup, Other Glyphosate Products to Be Pulled from US Home and Garden Markets