;
You are here: Home / Archives for Politics / Faulconer vs Alvarez

As you may have noticed, October has not been a happy month for the San Diego LGBT community.

Earlier this month the Harvey Milk American Diner in Hillcrest closed abruptly, bouncing checks to workers and simply failing to pay others, including the Harvey Milk Foundation.

At an October 8 press conference an LA Times reporter began asking questions about allegations of sexual harassment against Republican Carl de Maio.  He is an openly gay candidate for the 52nd congressional district. 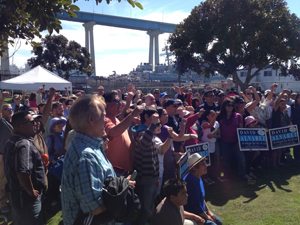 Supporters speak about what it meant to them

This past Sunday my family and I attended a thank you celebration hosted by David Alvarez’ campaign at Cesar Chavez Park in Barrio Logan. Over 150 supporters and volunteers turned out to not only get a thank you from Mr. Alvarez but to also thank him for running on a progressive platform.

In attendance were many luminaries on San Diego’s political left, from Democratic Party politicians to labor leaders to local barrio denizens who have engaged in a variety of community battles over the years. Some of who had fought for over a decade for the very park they were standing in.   [Read more…] 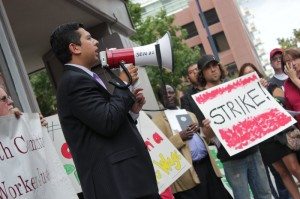 I was proud to support David Alvarez and his campaign for Mayor. His life is an inspiration and his future is the future of San Diego. But now it is time for all San Diego Democrats to come together, and grow beyond our basic base of supporters. There are floods of Independents and Republicans out there disgusted with the modern Tea Party-dominated GOP. The new Confederacy has taken hold of the Republican Party, leaving millions of Americans ready to join with the Democrats in reasonable dialogue and solutions to our nation’s problems.

But in the next few months, San Diego Democrats must start to consider how the negative campaign against Nathan Fletcher by Alvarez supporters – both officially, unofficially, and by rumor, innuendo, and deception – created a bitterness that caused many Fletcher Democrats (much less Independents who did not want to vote for Faulconer) to either sit at home or vote for Faulconer in protest. I became an enthusiastic Alvarez backer, but it was very disheartening during the primary to be called a “DINO” (Democrat In Name Only) or worse because I thought Fletcher the better candidate to keep the Mayor’s office in Democratic Party control.
[Read more…] 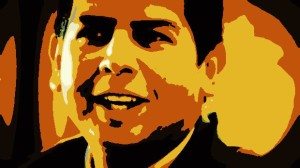 Nobody thought this was going to be easy.

Back in July, at the height of the Filner debacle, I predicted a dire outcome, noting that “in a recall or special election in an off year, the electorate is guaranteed to be more conservative and definitely not favorable” for a progressive replacing Bob Filner because, “Faulconer would have a huge fundraising advantage garnering support from all the usual suspects downtown and benefit from an energized base geared up to hand it to the liberals, unions, minorities, and other foul ‘special interest groups’ that they’ll blame for bringing us the evil that was Bob Filner. With the Democrats dispirited, humiliated and divided, it might not even be much of a fight.”

As it turned out, David Alvarez stepped up and offered progressives hope, and the labor movement surprised everyone by actually being able to raise more money than the Faulconer forces.   [Read more…]

The much vaunted ground game for the Alvarez campaign turned out to be a disappointment, as turnout  was lower than expected (the final numbers are dependent on 36,000 provisional votes). Mail in votes, as opposed to voting at polling places, which tend towards Republican candidates, were the deciding factor. Democratic party activist enthusiasm for their candidate clearly did not translate into the needed higher voter participation in traditionally supportive areas of the city.

It’s also true that the side with the nastiest attack ads won. The Lincoln club mailers attacking Alvarez’s character via gangster-esque photo-shopped images did a better job of motivating voters than labor’s portrayal of a smiling Kevin Faulconer as the tool of an amorphous set of downtown developers.   [Read more…]

So that just happened. Not that it’s all that surprising that Kevin Faulconer beat David Alvarez in the mayoral special election last night. What is very surprising is the margin by which Faulconer beat Alvarez. It was expected to be squeaker of an election, with most polls showing a one to two point spread. Every poll considered to be credible had Faulconer with a one point lead and a margin of error of around four points.

First, let me just say that I must be a complete idiot. I stood up last November (figuratively speaking) in front of a packed house at a meeting of the Pt. Loma Democratic Club and definitively predicted that David Alvarez would win this election. The numbers were in his favor, and San Diego was in the midst of a political transformation.

This is why I got out of the prediction biz a long time ago. Not sure why I decided to wade back in, because I’m obviously not very good at it anymore.   [Read more…]

As the mayoral election campaigns enter their final days of campaigning there is unanimity on one point- the election results will be determined by turnout.

After all the in-person campaigning, all the advertising and all the debates, it’s going to comedown to how motivated voters are. Media reports say the mail-in ballots already received (but not counted) seem to favor Kevin Faulconer (counting districts he carried in the last election). The Alvarez camp’s ground game, on the other hand,  is as good as it gets in San Diego politics.

While Kevin Faulconer has been advertising on Facebook for paid canvassers, hundreds of David Alvarez volunteers have been going door-to-door advocating for their candidate. Polling sponsored by mass media organizations indicates a dead heat. A “sixteen point gap” in earlier surveys has disappeared.   [Read more…] 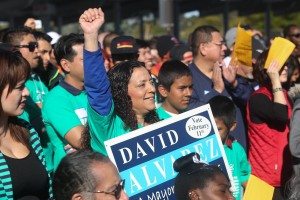 San Diego is on the national stage again.

As the final week of the dead heat mayoral showdown unfolded, Politico reported on “the battle for San Diego,” the Sacramento Bee’s Dan Walters pondered whether the race would be a harbinger of things to come in California politics, and the New York Times  covered “a battle of ideology in a city unaccustomed to that sort of election,” astutely noting, as I did here at the San Diego Free Press during the primary, that this contest is “a test of whether yet another big-city Democrat can be elected by riding a wave of populism, much as Mayor Bill de Blasio of New York did last fall.”

And that test is happening because last November David Alvarez defied the pundits and political insiders and beat the prohibitive favorite, Nathan Fletcher, in the race to face Kevin Faulconer in the run-off to be San Diego’s next mayor. This was a seminal moment for San Diego—perhaps the biggest political upset in the history of the city.   [Read more…]

My older Brother and I have the tendency of texting each other whenever we hear news about our childhood neighborhood, Barrio Logan. Lately, we’ve had lots to text about, thanks to the Mayoral race and our Homeboy David Alvarez.

Last September, my brother sent me a text message. It was a photoshopped picture of Nathan Fletcher in Chicano Park. Next to Fletcher were these words: “I’ve never been seen in this neighborhood but I want their votes anyway.” I responded to this text as any text savvy person does nowadays; with an LOL, and with a few laughing Emoji’s. I than responded with, “There’s a Mexican guy running named David Alvarez, he’s the Councilman of District 8, he lives in Logan I think.” My brother’s response: “He won’t win though.”

My Brother’s sentiments were echoed by many the day that Alvarez announced his candidacy for Mayor. And not just from residents North of Interstate 8, a few people and politicians South of I8 had doubts as well. That became evident when a few select, so-called, “Activists” from the neighborhood decided to endorse Nathan Fletcher in the the primary.   [Read more…] 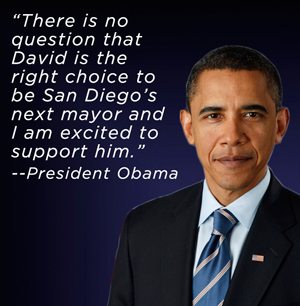 In what may turn out to be the closest race in San Diego mayoral history David Alvarez on Saturday got a big bump by receiving the endorsement from none other than the President of the United States himself, Barrack Obama.

In a statement released by the Alvarez campaign President Obama said, “As a native San Diegan, David Alvarez has been a fierce advocate for his city, and on the Council, has led efforts to build a strong middle class, put neighborhoods first and expand opportunities for kids in and out of school.  Today, with the city’s economy and neighborhoods poised to make progress there is no question that David is the right choice to be San Diego’s next mayor and I am excited to support him.”   [Read more…]

One of the big stories in the media this week concerns the decision by CVS/Caremark to discontinue selling tobacco products at its 7600 stores. In the short term this move will cost the company $2 billion a year in sales,or about 1.5% of their total volume.

I expected to see debate over whether this was a prudent business decision. After all, no good capitalist likes to walk away from a profit. And questions about the viability of the company’s long term strategy are to be expected. Will a large enough number of consumers actually react positively to the concept of hard-core retailing of health care?

I also expected the ‘yahoo’ element to chime in, filling comment sections with trollish chatter about how, liquor, candy and sodas would probably be next. But I was astonished at how quickly Fox News spun this story into yet another Obama-centric controversy.   [Read more…] 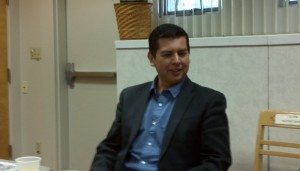 David Alvarez touts his status as champion of the little guy in the race for the top spot in San Diego City Hall.

“Special interests” is a term that has been thrown around a lot during this mayoral special election, especially during the runoff between Democrat David Alvarez and Republican Kevin Faulconer. But it is a term that has not been easy to define; one that depends almost entirely on your political point of view.

In TV and radio ads and mailers, the Faulconer camp decries Alvarez’ support from the “special interests,” the unions that are funding “eighty percent of Alvarez’ campaign” for mayor. Alvarez is critical of Faulconer’s support from the “business community,” the “downtown special interests” that many on the political left in San Diego feel have held the real governing power at City Hall.

As far as Faulconer is concerned, he doesn’t have any “special interest” support. His is a campaign fueled by individual San Diegans who believe that he is the right choice for the top spot at City Hall. He is supported by business groups (including the Lincoln Club), industry groups that may have a particular interest in city government and that Faulconer believes will play key roles in growing the San Diego economy. For example, the Building Industry Association, or the San Diego Regional Chamber of Commerce. Not special interest groups according to Faulconer.   [Read more…]