You are here: Home / Archives for Politics / Faulconer vs Alvarez

San Diego iMayor Todd Gloria’s call for increasing the minimum wage during the State of the City address on Wednesday is drawing sharp reaction from the local wannabe plutocracy. What Gloria proposed was putting any such proposal before the voters next November. The very idea scares the crap out of them.

You take it to the bank that these “checkbook” democracy types who see it as their duty to pay signature gatherers to spread misinformation getting their corporate vetoes of city council actions blessed at the ballot box will now act to make sure that a proposal via our elected representatives never makes it before the voters.

The same folks that have spun community planning, environmental stewardship and housing for low income people into a conspiracy to drive JOBS out of the city are busy figuring out a way to drive a stake into the heart of any minimum wage increase, even if it’s to be decided at the ballot box.   [Read more…]

As predicted, things are getting nasty in San Diego’s mayoral contest between City Councilmen David Alvarez and Kevin Faulconer.

The “non-affiliated groups”, fostered via right wing challenges to rules about campaign finance, are doing the heavy lifting. In theory this separates the candidates from the ugliness. In practice nobody can tell the difference. Or cares.

Two of these major mudslinging efforts are under scrutiny in the local media scene this week. Voice of San Diego took on a labor council backed TV ad putting Kevin Faulconer in the crosshairs and UT-San Diego ran a “fact check” on a Lincoln Club backed mailer attacking David Alvarez.  (Yes, the actual entities doing the dirty work have “official names”, but the truth is that these groups are the real contenders in this race.)   [Read more…] 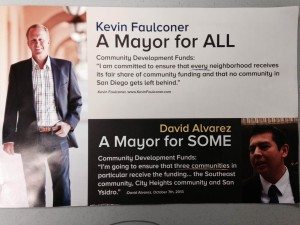 The local San Diego GOP attempts to steal a page out of the Democratic playbook in an attempt to rewrite history and claim the neighborhoods agenda for its own.

Over the past two decades, the economic and development focus in San Diego has been overwhelmingly focused around the “downtown special interests” that have controlled the city’s political agenda during that time. For two decades, whatever the big, powerful moneyed interests wanted in San Diego, they got.

That’s not to say that San Diego hasn’t benefited at all from some of the policies enacted during that period. It has. Downtown has undergone a pretty spectacular transformation. The massive General Dynamics complex in Kearney Mesa has been almost completely redeveloped (although not without significant controversy). Sorrento Valley has become a tech Mecca of sorts.

But it has been the downtown special interests that have dictated the who, what, where, when, and how of everything that has happened. It has served to make rich people multitudes richer, but it has done relatively little to bring about broad based reforms and economic development to the nation’s eighth largest city.   [Read more…]

The battle for endorsements by political campaigns is a key part of any election strategy, fostering prestige, volunteers, mentions in the press and donations.  Today we’ll take a gander at the Alvarez and Faulconer campaigns’ lineup of endorsers. Their campaigns have been slugging it out in recent days, each hoping to top the other with press releases and media events.

I wondered about the phrase “labor union bosses,” since my recollections about the group referred to by Faulconer’s PR guys, the Asian Pacific American Labor Alliance (APALA), was that their activities were focused on immigration reform, human rights and aid efforts for victims of natural disasters.   [Read more…]

Now that the “We Support the Chargers by Wearing a Bolo” meme has collapsed, there’s nothing standing the way of San Diego’s mayoral contest rising to the top of the daily news heap.

The reporting on sports and politics contests have much in common: a mix of subjective logic is mixed with euphoria or dejection as events progress. ‘Our team sucks’ can quickly become ‘Our team is invincible’ during the course of a contest.

On the political front there was lots of action over the past few days. The first wave of negative mailers from Kevin Faulconer’s corporate allies rolled into area mailboxes, with messages tailored towards party registration and residential location. Some people (including me) called it “Race Baiting”, (at least in my case) putting the ads in the context of the last 50 years of GOP campaigning. Others didn’t think so.   [Read more…] 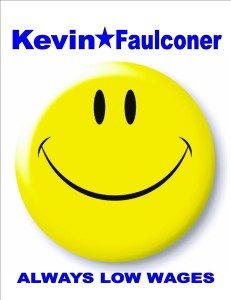 Meet Kevin Faulconer, man of the people. He’s running glossy commercials about how he’ll be “a mayor for all of us” and talking as if he’ll be the guy who will focus on neighborhoods that “have been underserved by this city for too long.”

His website and ballot statement have been scrubbed of any unpleasant reminders that he is a Republican backed by San Diego’s traditional power brokers, and he just can’t stop reminding us that there is “no such thing as a Democratic or Republican pothole.”

Like the Republicans at the national level who have decided that they can claim poverty as an issue while refusing to raise the minimum wage, extend unemployment benefits, or stop cutting services to the poor, Faulconer seems to think that a couple visits south of the 8 and a new catch phrase will suffice to bring home the votes of naïve Democrats and Independents who will fall for his rhetorical head fake while failing to note that he opposes the prevailing wage, increasing the minimum wage, efforts to support affordable housing, bonds for infrastructure, and, of course, allowing working class communities of color to craft their own community plans if large corporate interests oppose them.   [Read more…] 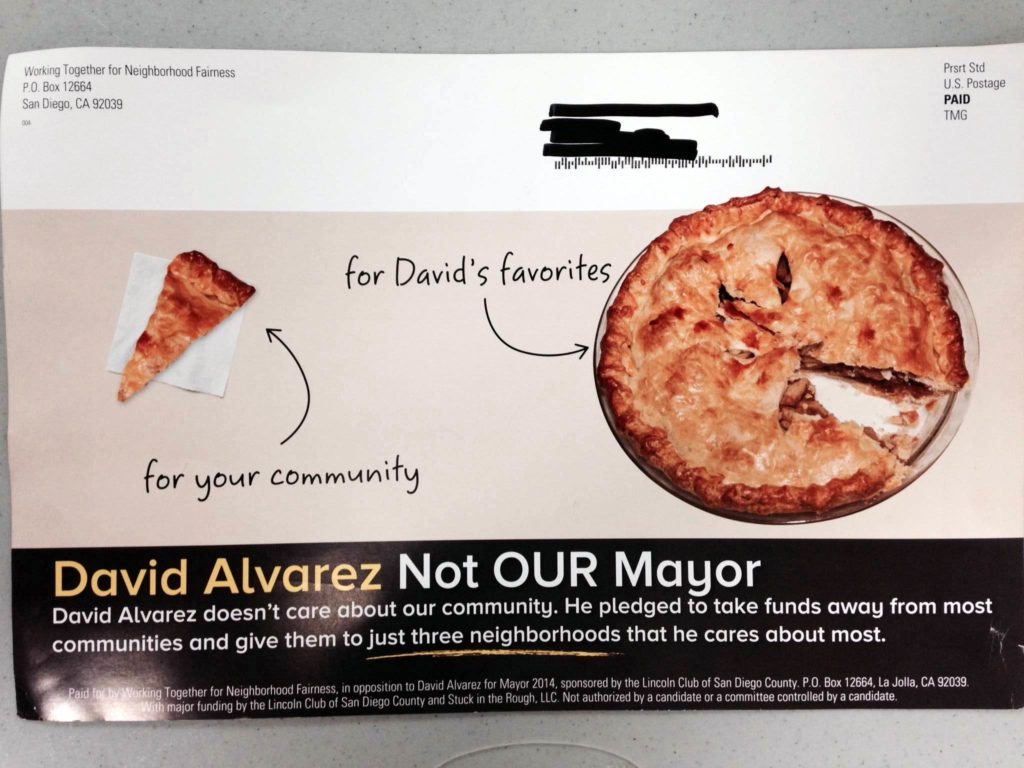 I’ve been predicting for some time now that San Diego’s Lincoln Club would play the race card in support of their candidate, Republican Kevin Faulconer, and today’s mailing proves my point.   [Read more…] 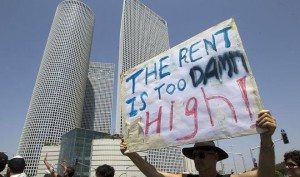 At the national level, there are signs that 2014 might be a hopeful one for progressives. In New York City Bill De Blasio was sworn in as mayor pledging to fight the “inequality crisis” with a bold progressive agenda addressing housing, education, and economic opportunity at all levels: “When I said we would take dead aim at the Tale of Two Cities, I meant it. And we will do it. We will succeed as one city.”

Many in the national press are pointing to De Blasio’s victory along with the momentum the living wage movement is gaining in cities like Seattle, and buzz around the effort to draft Elizabeth Warren to run for President as evidence of a shift in the national narrative about the question of inequality that bodes well for progressive populism and the country as a whole.

In a column that has been widely distributed across social media E.J. Dionne makes the case that even moderates should be cheered by this because, “For a long time, the American conversation has been terribly distorted because an active, uncompromising political right has not had to face a comparably influential left. As a result, our entire debate has been dragged in a conservative direction, meaning that the center has been pulled that way, too.”   [Read more…] 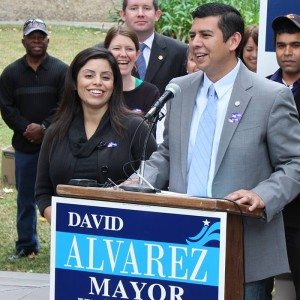 It was like walking in on a “Who’s Got the Sunniest Smile” Contest as the room in this “David Alvarez for Mayor” gathering, was full of them. I joined right in with my ages old grin.

My smile shone brightly because David is an answer to a dream of what a San Diego mayor should be like that I first conceived when I moved to town in late August of ’62. I was barely a few months over 24 years old, ready to change the world for the betterment of all humankind. For most of the years since then, my dream of a mayor like David has seemed just like that: a dream.

I mean when I showed up on the local scene I thought I had escaped the small-minded non-progressive kind of thinking I had been subjected to growing up in Tucson. That notion changed when I turned my TV on and saw two men, Frank Curran who would later become mayor and Allen Hitch who wanted so much to be the mayor.   [Read more…]

Paper, Plastic or Save The Planet? It’s about time we had that discussion in San Diego.

Apparently the approved strategy for the right wing in opposing just about anything these days is to call the thing that you’re opposing a “tax”. And, as is the case with the Neighborhood Market Association’s opposition to a proposed ban on plastic bags, any time the word “tax” is used is a good time to manifest a sudden concern for working class families.

It was this deep concern for the lives of “taxpayers, mothers, fathers, brothers and working class San Diegans” that prompted “community leaders, including Mark Arabo, president of the Neighborhood Market Association” to call a press conference yesterday in front of Rainbow Market in the Chollas Creek neighborhood.   [Read more…] 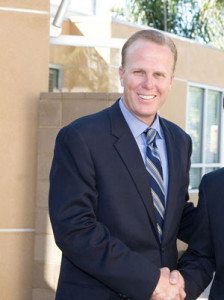 Editor’s Note:  This piece was originally published at Two Cathedrals in September.  But with the mayoral runoff election beginning to heat up, it’s worth bringing back now.

Kevin Faulconer has a problem. He’s the Republican Party’s standard-bearer in the race for mayor, but the base doesn’t really know him yet. So in the early campaign he needs to be focused on proving his far-right bona fides to the base that Krvaric and DeMaio built, and to do that he has to go out and say some pretty outlandish things. It happened over the weekend when Faulconer tried to explain his common sense take on economics.

“I support more jobs for working families, not fewer jobs, which is what this bill will lead to,” Faulconer said Friday of the minimum wage bill. “Common sense tells us companies will hire fewer people, which could stall economic growth.”

That was the reaction of supporters of the Barrio Logan Community plan yesterday after the City Council voted to place a referendum sponsored by maritime industry interests on the June 3rd primary ballot.  Industry backers were hoping that a successful petition drive for the initiative would force the council to rescind the plan rather than face the costs and conflicts inherent in a contentious campaign.

The UT-San Diego wasted no time showing where its sympathies lie, running with a front page story using the industry’s un-provable contention that jobs would be lost in the lede of a supposed news article.  While a City of San Diego study projects more than 4,000 jobs would be created under the plan, opponents can do no better than quoting individuals who “think” jobs might be lost.

Framing the conflict as one of “jobs” versus “neighborhood planning” is exactly the strategy pursued thus far by maritime industry advocates, who’ve managed to twist both ends of that equation (46,000 jobs will be lost! Yuppie condos are coming!) into an narrative so unpalatable that gathering signatures for an initiative was a cakewalk.   [Read more…]