;
You are here: Home / Archives for Hillcrest 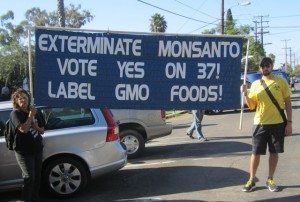 By Nadin Abbott and Frank Gormlie

It was close to 4pm on the first anniversary of Occupy Wall Street – Monday, September 17th – and the mood at the Canvas for a Cause headquarters in Hillcrest was expectant. As people started to arrive for the programed rally in favor of Proposition 37, Nadine Abbott had a chance to talk to Doctor Norrie Robbins of Women Occupy San Diego and a member of the singers Occapellas. Robbins is also Adjunct Professor at the SDSU Dept of Geological Sciences, and is retired from the United States Geological Service, DC office.

Robbins said: “I am worried about my food. I’m beginning to get weird allergies that do not run in my family.” 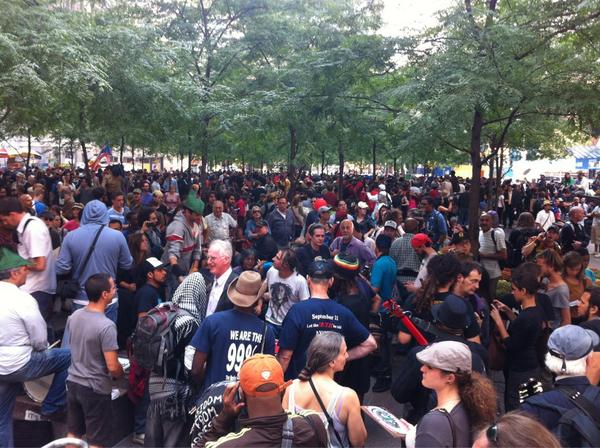 3:30 PM (PDT) As the press reports that OWS is all over for the day, here’s a picture taken a moment ago in Liberty Square

(For info on what’s happening in San Diego, come inside

3pm- Word from New York is that the late day actions were peaceful with few arrests. Thousands of people remain in Liberty Park. We’re headed out shortly to cover San Diego Occupy events. Check out our live feed from NYC below.
1 Pm This next hour will probably be the most dramatic part of the day for Occupy Wall Street. The activists gathered in Liberty Park are getting ready to march on Wall Street; the cops are massed and blocking the way.

Also It would appear that Anonymous has taken the Monsanto website down for the afternoon. Occupy groups in California have been targeting Monsanto for demonstrations as part of a campaign to support a ballot initiative that would require labeling of GMO foods. 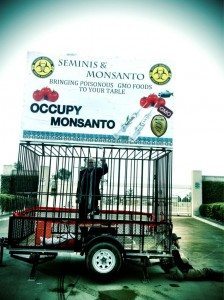 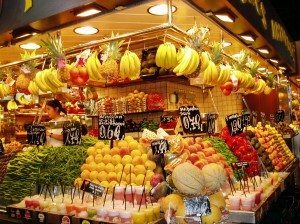 San Diego Public Market is on its way to becoming a reality, having surpassed its kickstarter.com crowd-sourced goal of raising $92,000 in half the time (seven days) allotted. As of this morning 1130 backers had pledged $116, 643 towards rehab costs for the two acre plus space, located in Barrio Logan, not far from Petco Park. The additional funds over the original target will be used towards the launch of the Food Hall and the Market Kitchen at the market.

Plans for the market include two days a week with farmers’ stalls, booths with local crafters and artists, music festivals, movie nights and quinceañeras, chef’s tasting events and art exhibits, along with the occasional Chaldean Festival, Chinese New Year’s parade, Filipino fiesta or charity fundraiser. The weekly farmers markets in the space will begin within a few weeks. The idea is to create a City Public Market along the lines of Seattle’s Pike’s Place, San Francisco’s Ferry Building or  Barcelona’s La Boqueria.   [Read more…] 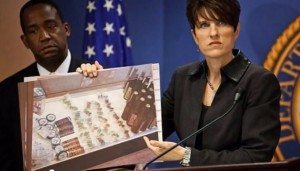 BACKGROUND: On October 7, 2011, at a press conference in Sacramento, US Attorney Laura Duffy, along with several other US Attorneys, announced a statewide crackdown on medical cannabis cooperatives, collectives, gardens, and others.

Without citing any specific violations in state law, Duffy’s office claimed all were out of compliance and would be targeted for eradication including those fully licensed and regulated by local government and law enforcement.

Since this proclamation of war on California’s medical marijuana program, Duffy’s office sent hundreds of letters to landlords threatening asset forfeiture if they did not immediately evict their dispensary tenants. As a result of these backhanded tactics, many landlords were forced to comply. Within six months, Duffy closed over 200 dispensaries in San Diego alone.

These closures forced thousands of employees into unemployment, left hundreds of properties vacant and most importantly, left the 70,000 plus medical marijuana patients in San Diego county wondering where to get their medicine.   [Read more…]

In case you haven’t heard, this is LGBT Pride weekend in San Diego. It’s a really big deal. The biggest event will be the Pride parade, attracting a projected 250,000 spectators along its route, and lasting two hours. Starting off at the intersection of Normal & University (11am) it will proceed west on University to Sixth Avenue, turning south to Balboa Park. Literally hundred of groups will be participating in this year’s parade, and we’d like to bring your attention to two contingents in particular. Gay pride events around the country started out as acts of defiance and protests against discrimination, and this year’s event in San Diego has revived some of that original spirit, along with the social events and pageantry that are commonplace in modern day celebrations.

Marching under the banner of ‘Join the Struggle, Not the Wars’, the San Diego coalition for Peace and Justice will join the San Diego Alliance for Marriage Equality(SAME) and Canvass For A Cause(CFAC) at this year’s LGBT Pride Parade. Joining them will be the San Diego Green Party, UniteHere Local 30, the Peace Resource Center, the International Socialist Organization, and others . They are marching as an open contingent (#113) this year, and are inviting like minded folks and organizations to march with them. More info on Facebook.

While politicians of all stripes are part of the annual Pride Parade, Mayoral candidate/City Councilman Carl DeMaio’s participation (#81) has sparked plans for a protest and counter-protest.   [Read more…] 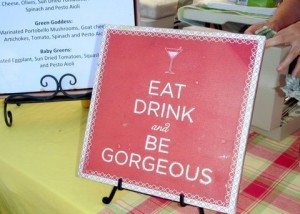 In our house we much of the grocery shopping on the weekends, and this includes regular trips to the Hillcrest Farmers Market. It’s always a thrill to come down the hill from Washington Street to the point where you can see the magnificence of the market spread out along Normal Street. Typically there are more than 140 vendors, selling everything from raspberries to falafel to hand puppets. Much of the produce is locally grown and virtually everything is sold with the kind of pride that only comes from having a personal connection with your product.  There are Farmers Markets throughout San Diego County every day of the week and even a magazine (Edible San Diego) that keeps up with all the seasonal events associated with locavorism. Here’s a handy list of those markets and their days/hours of operation.

This year marks the fifteenth anniversary of the Hillcrest Market. Besides being one of the larger markets in town, they have a robust web site, complete with a list of all their sellers and even a blog that shares impressions of the weekly event.  I took a boatload of photos last Sunday that I’d like to share with you here. Bon appetit!   [Read more…] 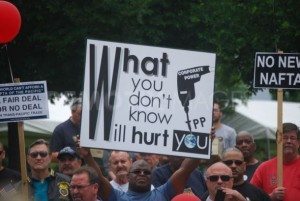 June 26, 2012 – A diverse coalition of groups has announced plans for ongoing protests aimed at trade negotiators meeting in San Diego next week for the 13th round of talks aimed at the creation of a Trans-Pacific Partnership (TPP) trade zone that would include the United States, Australia, Brunei, Chile, Malaysia, New Zealand, Peru, Singapore and Vietnam, with a “docking agreement” that other countries can join over time. Canada, Japan and Mexico are currently pressing to do so.. Describing the proposals being discussed at the confab as “NAFTA on steroids”, the Citizens Trade Campaign is seeking to draw attention to the fact that approximately 600 corporate lobbyists have access to the TPP negotiating texts, while the public has been barred from reviewing what trade negotiators have been proposing.

A leaked TPP document demonstrates that the group is considering a dispute resolution process that would grant transnational corporations special authority to challenge countries’ laws, regulations and court decisions in international tribunals that circumvent domestic judicial systems. Of further concern is the impact of the agreement on jobs, wages, agriculture, migration, the environment, consumer safety, financial regulations, Internet protocols, government procurement and more. Negotiations on the proposed pact will be held at the Hilton San Diego Bayfront Hotel from July 2 – 10.   [Read more…]