You are here: Home / Archives for Mission Valley

Actually, there wasn’t much fear

Our national zeitgeist certainly has turned nasty and fearful since the last Republican debate. World War III! Armageddon! Terror at home! I never imagined myself ever saying this, but I am grateful that the pressures of last minute holiday shopping have partially restored our national sanity–short-lived as it will no doubt be.

My Beloved and I recently joined thousands of our like minded neighbors making their way to Mission Valley. We left our home unarmed, optimistic that a good guy and good woman with cash and charge cards would be capable of handling whatever came our way.   [Read more…]

Is the City of San Diego about to go for a blanket CEQA exemption for the Mission Valley stadium?

Dan McLellan thinks so. He used to sit on the San Diego Stadium Coalition, was its vice-president for awhile and is a longtime ardent Chargers fan. He departed the group so he could speak out more aggressively, he told us.

McLellan thinks that all evidence points to the city attempting – what he terms “the legally dubious move”- of getting a blanket CEQA exemption in order to advance any proposed stadium project to a December 15th vote – which has been proposed by Mayor Faulconer just recently.   [Read more…]

Doug Porter recently wrote about the after hours demolition of one of San Diego’s two remaining historic Saltbox houses. The Bernie Michels-Thom Carey house at the corner of Florida Street and El Cajon Blvd was bulldozed by contractors working for developer HG Fenton this past Friday, May 29.

San Diego 6News has reported that the demolition permit may have been issued in error and that the city’s Development Services Department is conducting a “forensic review.” If that is the case, it is one helluva oops. A dozen red roses and a Hallmark card won’t put humpty dumpty back together again.   [Read more…]

Editor Note: Mr. Flynn’s post is in response to How to Tell if the Chargers Negotiations are Real by Liam Dillon which appeared in Voice of San Diego.

All the publicity, all the press conferences by the mayor and the task force, and now when it appears there is a tidbit of real news —— it’s confidential. “You kids don’t need to know this right now, maybe we’ll tell you later.”

Sometimes it’s better to get the information out right away. To hold back just leads people to speculate; what is it that warrants this kind of mystery?   [Read more…] 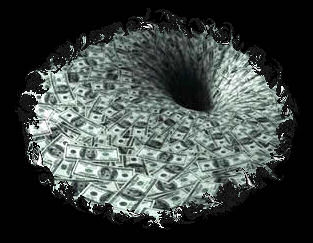 Editor Note: Mr. Flynn’s article is a response to Taking a Wide Lens on Mission Valley by Mary Lydon, published in Voice of San Diego.

A wide angle lens may not be the appropriate analogy for this discussion. It seems a telephoto lens for a close up was used here focusing on providing a stadium for the Chargers. The rest of the picture is fuzzy. What is troubling about these discussions is that they begin and end with the assumption that the city owned land in Mission Valley, now improved with Qualcomm Stadium is “dedicated for sports facility use.”

Perhaps parkland can be dedicated and forever reserved for public park uses, but other city owned land can and should be viewed as a public asset to be used for the most critical public needs.   [Read more…]

It seems hard to believe that the San Diego Latino Film Festival has been around for 22 years, but it’s true! But with full adult status, come some growing changes. In the background since last year, a transition has been achieved from the Hazard Center to the Fashion Valley Center. But those are not the only changes to be felt.

Phillip (Phil) Lorenzo has returned to SDLFF as Exhibition Director after a seven year absence during which he worked with SDAFF. One other thing that was different this year—it didn’t rain to mark the beginning of the festival. Instead, we were in the throes of a heat wave courtesy of our Santa Ana winds (in keeping with climate change predictions).

The people who braved the heat were rewarded by the usual excellent shorts on the first day in the form of DOCU-SHORTS. The unusual mix included a short about the decline of marriage and partnership over time, a maternity home for pregnant women in Cuba, and a photographer’s story (a man in Castro’s rebel army), among others.   [Read more…]

The contrast couldn’t be starker.

A procession of nationally recognized elected Democrats has rolled through San Diego to endorse the candidacy of David Alvarez for Mayor of San Diego.

More than three dozen elected officials from around the state have endorsed his candidacy.  The candidate’s got some star power behind him, connections that could prove valuable in the future.

Exactly zero Republicans outside the Chamber of Commerce/downtown developer set  have stepped up to the plate for his opponent Kevin Faulconer. Only four elected officials from anywhere are listed on his endorsements page. After promising the endorsement of “dozens” of Democrats from around the city for a press conference yesterday, only four were willing to be named on the press release.   [Read more…] 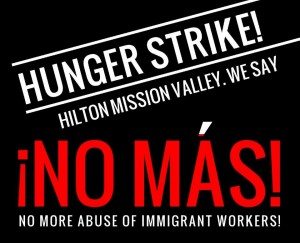 Employees and the community supporters at the Mission Valley Hilton will be engaging in a five day hunger strike starting today in protest of a decision by the property’s new management company to dismiss nine long term hotel workers.

Following weeks of protests, including a sit-in where 20 people were arrested, employees at the Mission Valley Hilton Hotel were elated last month after hearing that their jobs would not be eliminated as part of a takeover of the property by Evolution Hospitality/ Tarsadia Hotels.

What they didn’t know is that the new managers would subject all the employees to immediate E-Verify background checks. Nine long term workers are now facing dismissal as soon as next Tuesday. Those employees believe they are being targeted for standing up for their rights as immigrant workers.   [Read more…]

From San Diego Coalition for Peace and Justice /April 3, 2013

“National Anti-Drone Days of Action” from April 4 through 7 in San Diego start a month of protests across the United States against the policy and practice of drone warfare and secret surveillance.

Local and national organizations are coordinating a series of events to increase the attention to why drone killings and surveillance are bad practice and policy for the United States.

San Diego’s “Anti-Drone Days” is not one, but a series of events (see listing).

San Diego is where these protests will start based on the region’s role as the “national capital” of military drone production. Killer and surveillance drones pour out of San Diego at increasing rates, matched by the rise in deaths and dismemberment from US strikes across the globe.

Most of this production is tied to two corporate contracting giants — Northrop Grumman and General Atomics Aeronautical Systems, which is headquartered in San Diego.   [Read more…] 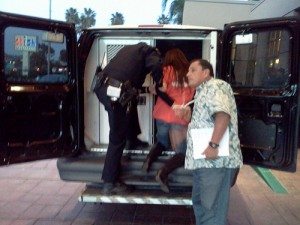 Twenty people were arrested Friday evening during a protest at the HiltonMissionValley hotel during a protest stemming from the refusal of management to take step to protect employee jobs during the sale of the property. Tarsadia investments is currently negotiating to buy the location.

Those arrested included hotel workers, family members, clergy and community advocates. The hotel has been the focus of organizing efforts by union advocates for months now. Employees were recently forced to re-apply for their jobs by the current owner, HEI Hotels and Resorts, a move aimed at breaking the back of a burgeoning employee organizing effort.

Employees were told by management on January 13th that they face mass layoffs. The hotel filed notice with the state of its intention to lay off workers on under the state’s WARN (Worker Adjustment and Retraining Notification) system run by the Employment Development Department.   [Read more…]

A move by the San Diego Police Department to eliminate an exemption allowing non-profit organizations to throw fundraisers and other entertainment events without having to pay for city permits is drawing fire from charitable groups. They say the local law enforcement agency is trying to balance their budget off local fundraisers.

The cops are hoping to make the case that the fee exemptions provided to non-profits are in violation of Proposition 26, which requires a legislative supermajority to change fees charged for licenses. They claim businesses paying for permit fees are subsidizing non-profit organizations because of the need to provide police protection at events.

Mission Valley mayhem… A press conference being held yesterday by the Employee Rights Center to air charges that the hotel’s operator, Connecticut-based HEI Hospitality, had been named in a complaint alleging wage theft totaling approximately $250,000, was disrupted by loud music apparently at the direction of hotel management.

Reporter Dave Rice, whose account of the incident is online at the SDReader, found the source of the noise behind a hedge over a hundred feet from the presser. Photographs published with the story clearly demonstrate the Hotel’s involvement:

When I walked around the corner to ascertain the source of the music, I found two men next to a limousine with large speakers aimed at the crowd and a power cord leading back toward the hotel….   [Read more…]

The Widder Curry Asks: ‘Who Is Going to Pay my Electric Bills?’