You are here: Home / Archives for National City

As we sat down to do our interview, Jesse Ramirez opened the conversation saying “I am a product of the Great Depression. We had to put food on the table so we did everything we could to make money”. He had many stories and memories of various events in the period between the 1930s and 1940s.

Jesse was born on April 22, 1926, in Houston, Texas and raised there. During the Depression he and his brother did various things to “put food on the table”. They sold newspapers and shined shoes to earn a few pennies. He sold the Houston Chronicle for three cents. He says the big thrill would be if someone gave you a nickel for the three cent newspaper and told you to keep the change. On Saturday nights they would stay up late preparing the Sunday paper for delivery.   [Read more…]

Two kinds of lowrider cars stand out: show cars and hoppers. Marisa Rosales and Jose Arevalo are good examples of lowriders who have worked for two decades to perfect their show cars.

Carolina Hernandez, on the other hand, is the lowrider with the hopper—a car whose front hood can bounce up in the air.

‘Hopping’ cars has been an art form since the 1960s. It wasn’t fully perfected, however, until the mid-1970s. Back in the day, they would put a beer can next to the car and if your car was able to hop higher than the beer can, you gained celebrity status among lowriders. Nowadays, when hoppers get together casually or at competitions such as Extreme Autofest, they can hop their cars up to eighty inches high.   [Read more…]

Lowriding is an art that also pushes car technology to the limits. Car Clubs members are like family and lowriders spend decades restoring cars to exactly how they looked and rode in the 1960s and 1970s.

Are there problems in the lowriding community? Yes, but probably not the ones you think. Lowriders, with their images of voluptuous girls on the front hoods, still remains a manly art form. Yes, nowadays diverse males from all ethnic and socio-economic groups join together in these car clubs, but they are still predominantly male. In San Diego County, Mayra Nuñez explains there are about seven women lowriders total, each in different car clubs.   [Read more…]

To join a car club or win awards at car shows, every lowrider needs to adhere to strict standards. Standard #1: the car must be impeccably clean.

Jose Arevalo, born and raised in National City, explains the standards while giving me a tour of his car.

Arevalo is a member of the Switch Car Club, established in National City in 1980. “How switch came together was, six of us guys played baseball together down in Las Palmas here locally. As we turned fourteen or fifteen years old we started getting cars. The club right there, the Latin Lowriders, were older guys, so we kinda looked up to them. They are the kind of group of people who showed us standards. Things that you do. How to act. How to be correct. During the early mid-1980s, Switch flourished and grew to be from 6 guys to 36 guys. From the early 80s to the late 80s we were one of the top clubs in San Diego.”   [Read more…]

Low-RI-der. We all know the 1975 song by Jerry Goldstein, but do we really understand the history, art and technology lowriders have contributed to our American culture?

I’m here to find out and Jose Romero is first up to tell us a little bit about lowriding history.

Jose Romero, a member of the Klique car club, the oldest continuous running car club in San Diego, has been lowriding for over 40 years. He explains that lowriding is a talent he’s had since childhood.   [Read more…]

And the National City Mayor is joining them

After many decades of clashes with the city council and police department in National City, lowriders again take Highland Avenue by storm, this time packing the parking lot of Foodland Mercado on Highland Avenue for Taco Tuesdays to show off their hoppers and show cars.

On Tuesday, July 28th even the National City Mayor, Ron Morrison, attended. He strolled past the vintage cars and posed for a picture with lowriders from several different car clubs.

Mayor Morrison said, “This is like an art fair because these cars are more like art than anything else.”   [Read more…]

Editor Note: The ongoing drought conditions in the region have impacted the availability of our water resources. The Sweetwater Reservoir is one of those resources.

While some may claim that the South Bay is filled with concrete and suburban McHomes, city planners have done much to preserve our green spaces. The Sweetwater Summit Campground is a wonderful little example.

You might consider it lackluster IF you are looking for “Disneyland” entertainment, but this low-key regional park hosts a playground with water works, 500-acres of trails and roaming animals that include the southern pacific rattlesnake, the coyote and the bobcat.   [Read more…] 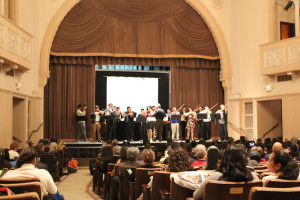 It’s time for the Third Annual Mariachi Festival! National City expects between 10-15,000 people to join in the fun. Last year they had 11,000 people, making it one of the largest mariachi events in San Diego County.

This year, National City has invited mariachi students from throughout the United States and Mexico. At least 10 groups will compete and professional judges will hand out awards based on their stiff rubric.

The festival — which is free to the public — will also include ballet folklorico, a live Latin Band, carnival game booths, a beer garden and food.   [Read more…]