You are here: Home / Archives for South Park

Many of the scenic trails winding through San Diego’s canyons are the unintended consequences of a San Diego infrastructure policy that made it possible to transform sewer line access paths into popular nature walks.

On a recent afternoon, Eric Bowlby, Executive Director of the non-profit organization San Diego Canyonlands, and Jason Allen, Senior Ranger with the City of San Diego Open Space Division, strolled along one such path parallel to Interstate 15 at the southern end of Juniper Canyon. They took turns identifying native and invasive plant species and praising each other’s tireless work to restore 3500 acres of open space in forty canyons throughout San Diego.   [Read more…]

The North Park Preservation lawsuit against Jack in the Box/City of San Diego is moving forward, with a Summary Judgment hearing before Judge Prager on Friday, November 21.

The group filed the suit when Jack in the Box underwent renovations and a rebuild that the community maintains are violations of city zoning and the community plan. Also at issue is that the city did not correctly permit the project.
[Read more…]

Last week sexual harassment accusations against congressional candidate Carl DeMaio went national by way of stories in Politico.com and CNN. Today we’ll follow up on developments in this story over the weekend.

A Saturday morning fundraiser featuring house speaker John Boehner in Pacific Beach for the 52nd district GOP candidate was notable for the absence of local politicos and a handful of protesters waving “Dirty DeMaio” signs.

The irony of the counter demonstration, reminiscent of reaction in some quarters to our former mayor’s boorish behavior, was the presence of Jess Durfee.  Back in the days when Durfee headed up county Democrats it was he chose to disregard warnings about Filner from a delegation of party women.   [Read more…] 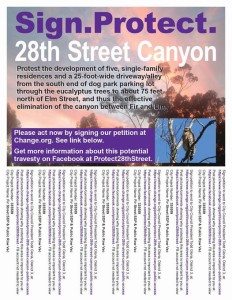 Neighborhood opposition to SDPB Holdings LLC’s interest in residential development at the corner of Granada Avenue and Fir Street in South Park continues to grow with a petition drive to protect the 28th Street Canyon. Residents question the wisdom of continuing development on the canyon, claiming that it will have a negative impact on a sensitive canyon habitat, cut off access to a popular dog park and hiking trail and obscure views.   [Read more…] 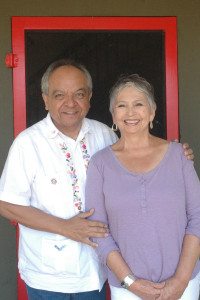 By Kelly Mayhew and Jim Miller

For those who know progressive politics in San Diego, Carlos and Linda LeGerrette are local legends. Starting with their roles in founding MEChA at Mesa College in the sixties and flowing through their deep involvement with Cesar Chavez and the farmworkers movement to their local community activism and fine work with the Cesar Chavez Service Clubs in our schools, the Legrettes’ great hearts and regard for their neighbors is boundless.

No one has done more for their community than Carlos and Linda LeGerrette, and they are greatly loved and respected by all those who they have touched over the years. It was our absolute pleasure to interview them on their lives, work, and deep roots in a place they jokingly call “Golden Park Heights.”   [Read more…] 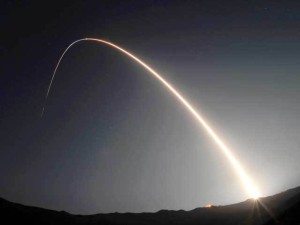 “An unarmed Minuteman-3 intercontinental ballistic missile was test-launched (on April 7, 2006) from Vandenberg Air Force Base in California. The missile’s single, unarmed re-entry vehicle traveled approximately 8,200 km (5,100 miles), striking a pre-determined water target near Guam in the Northern Mariana Islands. The launch was part of a developmental test to demonstrate the weapon’s effectiveness at an extended range. The Minuteman-3 missile originated from the 564th Missile Squadron at Malmstrom Air Force Base, Montana.” (from various news releases including “The Mercenary Missileer’s Missile News”).

It is a little under 5,000 miles to the Marianas (just above the equator between Longitudes 145-165 E to Brooklyn Heights, San Diego (Lat 32.724, Long – 117.129 W). But more about that later. Now, about this “Do I live in Golden Hill or South Park?” controversy. As the old Americana saying goes: “you can call me Jay or you can call me Ray, just don’t call me late for dinner. “ For a variety of political and geographic and geologic reasons, place names evolve. Sometimes it is very much a matter of branding for real estate purposes.

This name of place issue kind of parallels the name of the community of City Heights which was taken in 1981 by the Community Development Corporation founders led by Jim Bliesner from the name of the largest subdivision in what had been the “Golden Rule” city of East San Diego. Later there were some residents of the City Heights neighborhood of Cherokee Point who thought they ought to be a part of North Park because they had a 92104 zip code. But it was still in the officially adopted community plan area of City Heights. Regardless of what the real estate salesperson or the post office, or the subdivision map or the City says, the people who live in their neighborhood get to call it whatever they want.   [Read more…]

Today, Friday May 17, is Bike to Work Day and there are pit stops all over the county for cyclists to stop, enjoy a bite to eat, meet some fellow riders, and generally start the day on a good foot.  I enjoyed the morning at the 30th Street & Upas Street corner with fresh coffee and pastries and some conversation with neighbors.

If you weren’t able to join the festivities today (or did but want to keep the party going) there are a number of great cycling activities going on this weekend.

The second edition of this program from the San Diego County Bicycle Coalition rolls into action on Sunday in South Park.  The Bike Local Sundays program is held in a different neighborhood every third Sunday of the month and South Park follows the Hillcrest debut in April.  Per the SDCBC:

“Bike Local Sundays started with a goal to get more people riding bikes to support business in San Diego. Trends show that more people riding bikes versus driving improves community health, air quality and traffic congestion, as well as boosts business by relieving residents of the costs of owning and operating a vehicle, transferring those savings to the local economy.”   [Read more…] 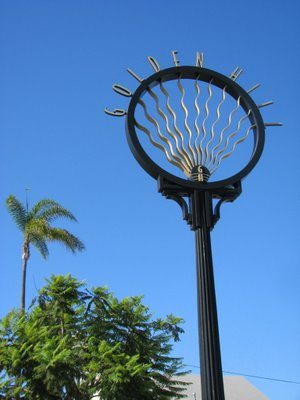 Often when I tell someone I live in Golden Hill they say “Oh, yeah? Where?” 30th and Cedar is my reply and then they say “That’s South Park.”

“No, Golden Hill,” I say and they, like we’re in a debate competition, and they’ve got me on this one, start quoting passages from a map to prove that I’m not a Golden Hillian. And then I have to explain to them, in a nice friendly “home is where the heart is,” kind of way, that no matter what some chart has to say, I live in Golden Hill.

And I don’t say that out of any animosity towards them or South Park. Not at all. It will be a slow ride if it happens but I might claim to live there some day since I do “officially.” It’s just that I’m a Golden Hill O.G.   [Read more…] 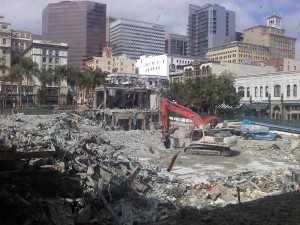 By A Guy with a Cell Phone

Horton Plaza is falling down! Actually, the old Robinson/Planet Hollywood section of Horton Plaza facing Broadway is being bulldozed to accommodate a new public park. According to Civic San Diego, “Westfield will demolish the former Robinson’s May building and convey the land at the proposed plaza valued at $25.8 million in exchange for being relieved of profit-sharing payments through 2035.” In case you haven’t noticed, there is no longer free three hour parking.   [Read more…]

A weekly column dedicated to sharing the best sights and activities in San Diego at the best price – free (or ‘mostly free’ as in today’s offerings)! We have a great city and you don’t need to break the bank to experience it.

The Second Saturday of each month a couple of San Diego’s finest commercial institutions have unique events that make for a fun day.
[Read more…]

Streets to Be Closed to Cars in Grant Hill/Stockton, South Park, North Park and City Heights

On the beautiful sunny morning of February 25, bicycle enthusiasts, city residents, and local politicians gathered for a ribbon-cutting ceremony at San Diego’s newest bike corral in Hillcrest.  If you’re unfamiliar, a bike corral is an onstreet parking facility for bicycles, typically taking up the space of one or two automobile parking spots and providing parking for ten to twenty bicycles.

This new installation is San Diego’s fourth bike corral, all of which are located in District 3.  For those of you scoring at home that leaves us only 87 bike corrals short of the 91 boasted by the bicycle mecca of Portland.

The new bike corral is located on the south-west corner of the intersection of Richmond Street and University Avenue in Hillcrest, next to Filter Coffee House at 1295 University Avenue. The Uptown Community Parking District paid for the corral and the Hillcrest Business Association will provide for upkeep and maintenance in the future.   [Read more…]

In case you haven’t noticed, San Diego Free Press has a terrific story up here about local efforts at “Poll Watching” underway via the Election Integrity Project and True The Vote, organizations with connections to the Tea Party movement. Our citizen journalists have been ‘watching the watchers’ over the past few months.

It’s pretty obvious from reading their materials that the underlying idea behind these ‘watchers’ is voter intimidation of certain classes of people that they have deemed to be suspicious. In practice—despite claims to the contrary—this has generally meant people of color, students, and other groups whose voting history runs counter to the conservative cause.

Despite promises from True The Vote founder Catherine Engelbrecht earlier this year to recruit and train a million volunteers to watch the polls, the group has fallen far short of that goal. For example, Election Integrity Maryland has only about 200 recruits. Nevada Clean Up the Vote has about 700. And our SDFP observers also report a sharp decline in volunteer participation in local efforts More Inside…

Troubled OB Man Taken Into Custody After He Banged on Fire Station Windows, Attacked Palm Tree – Then Firefighters Put Out Fire at His House on Ebers

Time to Question the Militarization of Our Children