You are here: Home / Archives for Politics / 2014 June Primary

Functionaries like County Clerk Ernest Dronenburg are important assets for the big money types that typically dominate local governments. Their behind the scenes efforts mean that policies get interpreted and enforced (or not) in a manner ensuring that “business as usual” remains Business As Usual.

That’s the reason why Dronenburg was among the earliest (along with Bonnie Dumanis) to get an editorial blessing from UT-San Diego. And they had to s-t-r-e-t-c-h the truth to find a reason to support him. Or, as one astute commenter noted, perhaps they just penned the editorial based on a campaign press release.

Let’s face reality here; the position of  “County Assessor/Clerk/Recorder” is usually not likely to be of concern to most voters. Today I’ll take a look at why you might want to be concerned as you vote on June 3rd. The bottom line: There’s a lot not to like about Dronenburg.   [Read more…] 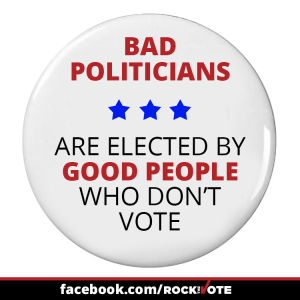 Okay, so I know the deal. You’ve been putting off doing your election homework and now you’re getting nervous because you have no clue about many of the contests on the ballot.

Don’t even think about not voting on Tuesday June 3rd. Here’s your one-stop shop for better candidates and issues on the left side of the aisle.

I’m going to skip over minor candidates for space reasons and Republicans because I’m mean that way. Plus there were a few races we just never got around to covering. Many of these contests were explained in more detail in our five part series, along with some features on issues and candidates; you can find them by going here.   [Read more…]

Here we go. Same old same old politics in San Diego. The “Big Boys” have to get their way. They want us to vote “No” in opposition to a plan that was created to make a community healthy and safe. And mayor, Kevin Faulconer, who has billed himself as an “independent” leader, has, as such, been going around talking about how when Propositions B & C are voted down, “it will be our opportunity to pass a plan that works to protect our families, to protect our economy.”

Hey, dude, we already have a plan to keep toxics, pollutants, carcinogens and flammable chemicals, a safe distance away from Barrio Logan schools, playgrounds, and homes. So what does your plan look like? Oh, you don’t have one? And a new plan can’t happen for at least a year?

The Barrio Logan community worked diligently for years to bring about reasonable land use and zoning changes and it happened. It’s on the books right now. There’s a five-block buffer zone that bans new residential and industrial suppliers, while allowing such existing uses to remain in place and expand by no more than 20 percent.   [Read more…]

Republican Neel Kashari is about to find out whether or not two million dollars of his personal fortune is enough to win a spot in the November 2014 California gubernatorial contest.

The latest set of polls, via Stanford University’s Hoover Institute and San Francisco’s Public Policy Institute, point to a June 3rd victory by Tea Party favorite Tim Donnelly. Despite endorsements from GOP luminaries like Condoleezza Rice, Mitt Romney and ex-Gov. Pete Wilson, TV ads and huge financial advantage, Kashkari’s only hope at this point seems to lie in winning over undecided voters in the primary.

Donnelly is counting on grass roots support, saying the election is about a “divide between the common man and political elite.”  His campaign claims the unanimous endorsement of California GOP county parties and points to their 4,100 donations compared Kashkari’s slightly more than two hundred donations as proof of this point.   [Read more…]

The 2014 primary elections in California are just a week away. I’ll go out on a limb here and predict victories for well-funded incumbents and many causes supported by a minority of the public. The reason is simple. People aren’t voting. When people don’t vote, bad things can and do happen.

It wasn’t supposed to work out this way. The “top-two” primary system opening the ballot to all voters, reformers told us, would increase turnout as decline-to-state voters, once excluded from partisan races, became more engaged.

What the experts haven’t taken into account is the collateral damage from increasingly cynical and factually challenged campaign advertising. Now that restrictions on campaign funding are largely absent, the noise level is rising and the bullshit is getting deeper. People are getting more conditioned to swallow the lies; it’s less work that figuring out the truth. And the course of least resistance is to do nothing, as in not vote.   [Read more…]

Voters in San Diego County’s District 5 race for Supervisor have a tough choice to make this year. It’s Republican Bill Horn against Republican Jim Wood, which–from a partisan perspective– is probably just the way they like it in the northern reaches of the county.

Unflattering portraits of both candidates have appeared in the media over the past day or so.  Voice of San Diego’s profile on Wood paints him as a social neanderthal. Online inewsource’s probe into Horn’s crossover religious and real estate dealings makes him look sleazy, even if it’s unlikely he’ll ever face legal action.

Oceanside’s Mayor Jim Wood says he’s running as a populist alternative to five term incumbent Bill Horn, whose relationships with developers and inflammatory rhetoric have often been seen as controversial. I can attest from personal observation that Wood is socially challenged around women, and after our most recent experiences with the Mayor-who-cannot-be named, it’s safe to say he’s an embarrassment waiting to happen.
[Read more…]

Oh crap. It’s starting to look like the San Diego’s second attempt to throw a party celebrating the centennial of the 1915 Panama-California Exposition in Balboa Park is in trouble.

The first round of planning came to an abrupt end back in February, when Balboa Park Celebrations, Inc crashed and burned, admitting that three CEOs, a board chock full of downtown groupies and $3 million in seed money hadn’t amounted to much of anything.

Mayor Kevin Faulconer handed off the event to another city-inspired non-profit entity, the Balboa Park Conservancy, on March 28th. A press conference on that date talked about a focus for the Centennial limited to four events: the ongoing December Nights celebrations in 2014 and 2015, along with spring and fall celebrations of things unique to San Diego.   [Read more…] 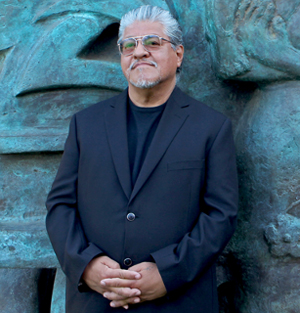 It’s about time we had new ideas, new imaginations, and an encompassing and inclusive governance.

I am not a career politician. I won’t accept corporate donations. I am not a Democrat or Republican. And I’ve been blocked from print or airtime in the major media. Still, I’m running a serious independent campaign to be governor of the largest state in the union, one of the 10 largest economies in the world, with the third largest agricultural business anywhere.

It’s about time we had new ideas, new imaginations, and an encompassing and inclusive governance. It’s about time a candidate ran that can be trusted to: 1) end poverty; 2) provide clean, green and efficient energy and healthy environment; 3) overhaul the bloated and failing prison system (the largest in the world after the U.S. federal prison system); 4) institute single payer quality health care from the cradle to the grave; 5) provide free—non-debt—quality education from pre-school through university; 6) create access to art, music, dance, theater, books, writing, festivals, murals, and more in every neighborhood.   [Read more…] 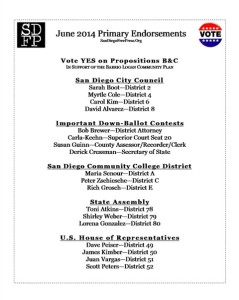 We met, we debated and we agreed, mostly.

Here are the people we’d like you to vote for in the June 2014 primary.

The first decision we made was to limit the number of endorsements. We agreed that local races were more important, with the exception of  a nod to Derick Cressman for Secretary of State because of his leadership in fighting the influence of Dark Money in California elections.

If you jump inside you’ll find a handy-dandy clip-able or click-able sheet. And DON”T FORGET TO VOTE!   [Read more…]

In a perfect world we’d all be voting FOR candidates in elections. Instead, we voters are all-too-often mesmerized by the aura of incumbency. A figurative wink and a familiar smile replace judicious judgement. Sometimes it becomes necessary to take a stand, using the power of the ballot box to say ‘enough!’ This is one of those times.

In the upcoming June 3rd primary there are three incumbents who I believe ought to be voted out of office: District Attorney Bonnie Dumanis, County Assessor/Clerk/Recorder Ernest J. Dronenburg, Jr. and Superior Court Judge Lisa Schall.

The particulars on each these bad apples differ, but the thing they all have in common is that they’ve misused the powers vested in them by the voters. Today, in the fifth and final installment in this series I’ll examine their records and offer up some better choices.   [Read more…]

Today’s column provides thumbnail sketches of people running for city council in San Diego. In most instances you’ll find a link for the campaign website right underneath their listing providing much more information about the candidate.

This year all the even-numbered City Council seats are up for grabs. The seriously competitive races are in Districts 2 and 6; should the Democratic candidates prevail in those contests their party will maintain a veto proof majority on the council. Unless there’s some polling that I don’t know about, Myrtle Cole (D4) and David Alvarez (D8) should win handily.

Actual SDFP endorsements will be in another article appearing tomorrow, though I doubt you’ll have much trouble figuring out which way I personally lean. Hopefully this monstrous spring heat wave won’t keep my brain from creating a handy-dandy printable endorsements guide.   [Read more…]

There are five ballot measures covered in today’s column; two-state wide issues and three local topics. State propositions 41 and 42, along with city proposition A, are no-brainers, righting wrongs and fixing stuff that obviously needs to be fixed.

So we’ll start with what I think is the best reason for San Diego voters to get motivated to go the polls: Propositions B&C. They are about a small issue with much larger implications.

Actual SDFP endorsements will be in another article, though I doubt you’ll have much trouble figuring out which way I personally lean. Yesterday we took a look at federal and state legislative contests. Monday we covered some of the important statewide offices being contested on June 3rd.   [Read more…]